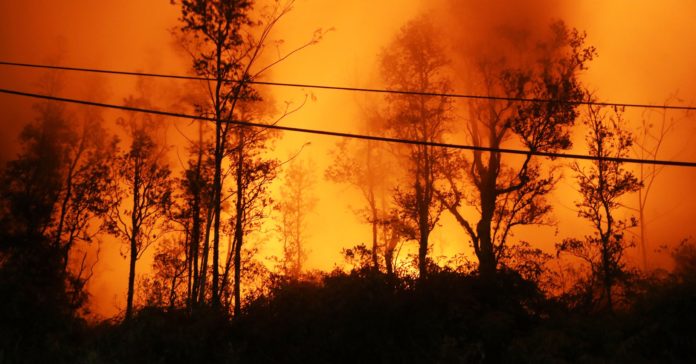 At 4:15 am on Thursday, the slow, oozy eruption of the Kilauea volcano on the Big Island of Hawai’i went boom. Up until then, magma had been moving into what’s called the lower East Rift Zone of the volcano, about 20 miles from the summit, opening 20 new fissures and spilling lava into forests and neighborhoods. But magma moving toward one place is moving away from somewhere else; the lava lake in the summit was sinking. It finally got below the water table in the wee hours. Molten rock plus water equals steam—quite a lot of steam, actually. Enough to blast a cloud of ash and vapor 30,000 feet into the sky over the island chain.

Volcanologists who watch Kilauea haven’t seen a boom like that since 1924, but that doesn’t mean they were surprised. Quite the opposite. Kilauea and its sibling volcanoes, sitting atop a “hot spot” in Earth’s crust, are where volcano observation started, and they’re literally a textbook case of how close observation with high-tech sensors can teach scientists to forecast disaster, and by forecasting it, avert it.

“Part of the reason we have this opportunity to make good forecasts at Kilauea is that the volcano is extremely well-monitored,” says Mike Poland, a USGS geophysicist and scientist in charge at Yellowstone Volcano Observatory. (Poland also spent 10 years at the Hawaiian Volcano Observatory.) “It’s been a testing ground for monitoring equipment, and not only are new techniques developed there, but the network of equipment has been expanding for decades.”

The scientists at HVO has been very on point for this ongoing, slow-boil eruption. As the geoscientist (and former WIRED blogger) Erik Klemetti wrote in his blog at Discover, months ago the HVO scientists predicted vents opening in the East Rift zone, farther away from the summit than they usually appear, based on inflation under an area called Pu’u O’o. They predicted, accurately, that the development Leilani Estates was in danger, and Tuesday night USGS classified Kilauea as a code-red eruption risk.

A network of seismometers, Global Positioning System receivers sensitive to within millimeters in three dimensions, tiltmeters embedded in boreholes, gas sensors, and satellites made those predictions possible—not to mention the volcanologists’ accumulated knowledge of history and direct observation. “The kind of activity that is occurring now is very similar to the activity that occurred during a two-week period in May of 1924, and involves we think a steam-driven explosion from the Kilauea Halemaumau crater,” said Steve Brantley, deputy scientist-in-charge at the HVO, at a press briefing Thursday. That behavior, he said, distinguished what’s happening now from, say, Kilauea’s massive 1790 eruption, which killed dozens, perhaps hundreds.

Those similarities to the 1924 blow-out tell HVO scientists what to watch for now. That’s the advantage of a place founded in 1912 with the express purpose of getting out ahead of eruptions. Back in March, researchers saw inflation of the vents generating magma. “The eruption rate at Pu’u O’o was declining. The hose at Pu’u O’o was getting kinked,” Poland says. “We then started to see inflation of the summit…. It became pretty clear something was going to happen.”

It did. “Suddenly Pu’u O’o drains, the summit starts to drain, and all of this magma starts to head out to the East Rift zone,” Poland says.

With all that in mind, HVO scientists are now warning that the next phase of eruptions could send very large boulders as far as a mile from the crater, and marble-to-pea-sized rocks up to four miles away. A GPS receiver in the East Rift zone moved six inches in 24 hours; that tells them to expect more vents opening there. “One thing that we would really be looking for is continued subsidence of the whole summit crater area,” Brantley said. “So far the summit crater area has subsided almost a meter, and we’re tracking that with tiltmeters and our GPS receivers.”

All that acquired knowledge is really good news for people living in Hawaii, and for airplanes that might fly over it. (Airplanes and ash clouds do not mix.) “At Kilauea they really understand better than most volcanoes how the subsurface is organized,” says Natalia Deligne, a volcano hazard and risk modeler with GNS Science in New Zealand. “The important thing is they’ve had many eruptions to really understand the system.”

It’s good news for other well-instrumented, keenly observed volcanoes, too—like Mt. Etna in Italy, or the volcanic system under Yellowstone National Park, even though it hasn’t erupted in 70,000 years. “Volcanoes are like people. They have fingerprints. They have personalities,” Poland says. “Some volcanoes or volcanic systems have earthquake activity, ground deformation. They’re dynamic. Others will be quiet for a long time.”

But some systems, like the volcanoes of the Cascades (other than Mount St. Helens) are much less instrumented and observed less closely—because they pose less risk to people and infrastructure. The weird irony in all this is that the biggest reason scientists understand Kilauea is that it keeps erupting. “You can have a volcano that’s super well-monitored, but if nothing’s happening you’re not getting the opportunity to understand how it works,” Deligne says. It’s always the quiet ones, you know?