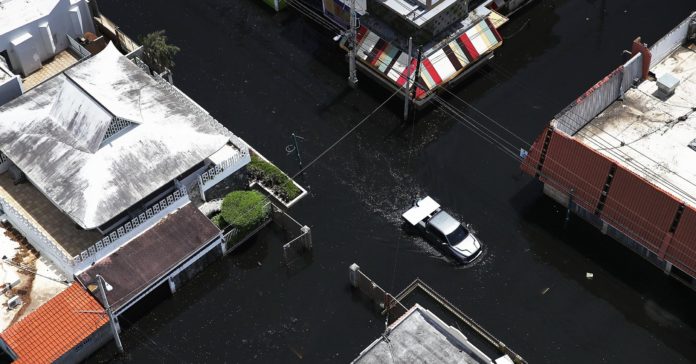 How it used to go was, after some extreme weather event, reporters would ask Climate McScientist, PhD whether the flood/drought/hurricane/disease outbreak/wildfire/superstorm happened because of climate change. Dr. McScientist would pat the reporter on the head and say: Well, of course, one can never ascribe any single weather event to a changing global climate. Granted, a horrifying, unprecedented natural disaster is, maybe, the sort of thing one would expect on a planet where humans have been burning hydrocarbon fuels for decades, putting carbon dioxide and other greenhouse gases into the atmosphere and raising the overall temperature on Earth. Maybe.

But Dr. McScientist and colleagues were working on being able to say more. Since at least 2004, they’ve been developing a science of attribution—how much of any given extreme weather event, within some degree of probabilistic certainty, was due to climate change? And it’s working.

At the end of 2017, three journal articles modeled Hurricane Harvey—the largest rainfall of any US hurricane on record, somewhere between 24 trillion and 34 trillion gallons of water—and concluded that human-caused climate change had made it about four times more likely than it would have been in the middle of the last century. Then, in January, an annual special edition of the Bulletin of the American Meteorological Society dedicated to event attribution included three papers asserting that without human-caused climate change, three recent meteorological anomalies simply would not have happened: 2016’s global heat wave, the 2016 Asia heat event, and a “blob” of weirdly warm ocean off Alaska.

“We tend to be conservative in how we communicate. Just as we’re finally getting onto the same page and the media starts saying what we’re saying, we say, ‘Oh, scrap that, we have something else we know,’” says Stephanie Herring, a climate scientist at NOAA’s National Centers for Environmental Information and an editor on that BAMS issue. “This fall we kind of had to say, ‘Remember how we told you we could never say that? Well, we’re saying that.’”

Could Herr be more terrifying? Sure. All those far-off, maybe-someday signs of a climate apocalypse she and her colleagues used to hint at are all happening. “The future is here,” Herr says.

And that means you can sue the people responsible.

In 2003, with the waters of the flooding River Thames literally lapping at his front door, Oxford climate scientist Myles Allen wrote an op-ed for the scientific journal Nature titled “Liability for Climate Change.” Allen wondered if someday scientists might solve the “attribution problem,” as he called it, of linking specific events (like those floods) to a warming Earth.

Back then, Allen figured that no one would ever be able to blame some percentage of a given weather event on human influence. But he did think it might be possible to say that greenhouse gas emissions had increased the probability of an event. And if you could do that, Allen wondered, could you come up with a more rational insurance market … and hold greenhouse gas emitters liable for damage? “The prospect of a class action suit with up to 6 billion plaintiffs and an equal number of defendants may seem rather daunting,” Allen wrote, “but if we can overcome these problems in end-to-end attribution, everything else is (at least conceptually) rather straightforward.”

And indeed, the next year in Nature Allen and two colleagues published what’s regarded as the first climate event attribution paper. Looking at Europe’s 2003 heatwave, they compared observed temperatures for the 20th century against temperatures as shown by computer models, with and without greenhouse gases. The result: a “fraction attributable risk.” “Human influence is to blame for 75 percent of the increased risk of such a heatwave,” they wrote.

The science has gotten even more robust. What used to require time on a supercomputer can now happen pretty much anywhere. And the methods have gotten better, too. “We can propose hypotheses of the probability of exceeding a given threshold with and without global warming, and we can propose hypotheses about the fraction of an anomaly contributed by the historical change,” says Noah Diffenbaugh, a climate scientist at Stanford University.

Diffenbaugh’s group has done that math on California droughts. In 2015 they calculated that California was more likely to have a drought year when there was low precipitation—I know, duh, right? Except they further figured out that droughts were twice as likely if that low precipitation came in a warm year versus a cooler one, and that those low-precip years have been twice as likely to coincide with warm conditions in the last two decades. The risk of drought has essentially doubled, and the stats say that’s because of global warming.

Not every researcher agrees that attribution science can pull off both magnitude and probability calculations. “The kind of statement that says y percent of x event was caused by climate change, or event x was made y percent worse—that’s controversial,” says Kerry Emanuel, an atmospheric scientist at MIT and author of one of the three Harvey attribution papers. “I have been told by folks who specialize in communication that we need to be less equivocal. I don’t like that, because first of all it borders on being dishonest, and second it makes us sitting ducks for a sufficiently intelligent person who wants to show these changes aren’t happening.”

To be clear, Emanuel believes that human-caused climate change is having a major effect on the planet. He’s just more comfortable with talking about an elevated probability than carving out exactly how much global warming enhanced a specific hurricane. “The impact of the two statements is comparable,” Emanuel says. “If I say the probability of rains like Hurricane Harvey is elevated by a factor of four, that’s a pretty astounding statement, and it’s much more effective than saying Harvey’s rains were 10 percent worse.”

As a 2016 National Academies of Sciences, Engineering, and Medicine report on attribution science said, the events easiest to study are ones for which researchers have a lot of observational data, that computational models can understand, and that aren’t complicated by other factors like infrastructure and resource management. Wildfires are a tough one. Heatwaves, they pretty much have figured out. “Hurricanes, we’ve really been working hard to get those error bars down and increase the confidence,” Herring says. “Tornadoes, we have no confidence. We’ve never seen an attribution paper on tornadoes and I don’t expect to see one in the future.”

Meanwhile, improvements in attribution are leading to a whole new response to climate change: lawsuits. The future that Allen predicted is coming to pass. “It’s most likely that attribution science, given its state of development, will inform disputes relative to adaptation issues,” says Lindene Patton, an attorney at Earth and Water Law Group. “Has someone constructed a housing development in a way that has acceptable risk of harm? Have particular directors and corporate officers disclosed information reflective of climate-related risk to share price?”

Those cases will come down to what professionals know and what they should know—and what they have a duty to do about it. The courts understand this stuff.

A bigger question is whether courts could hold actual carbon emitters accountable for climate change-related damages. New York City, coastal cities in California, and cities in Colorado suing petrochemical companies for sea level rise and other climate change outcomes. It’s a tough case to make. In a climate “tutorial” that was part of the California cities’ lawsuit in March, Chevron’s attorney Ted Boutrous didn’t attempt to deny a single thing about the physics and chemistry of climate change, or even that human activity caused it. He just said it didn’t make sense to blame oil companies. Burning hydrocarbons doesn’t kill people; people burning hydrocarbons kills people.

Part of the cases against the oil companies will be that they knew about the bad effects of their products and sold them anyway; that worked against tobacco companies. Another part might rely on the so-called Carbon Majors study, which in 2014 calculated the exact amounts of all carbon emissions any of the top 20 oil companies were directly responsible for having extracted. Whether that’ll hold up in court (alongside the NAS study affirming that attribution science as a whole is real and a generally accepted methodology) is the crux. “We don’t know what will happen, but no one thought tobacco litigation would succeed, and that completely changed public health policy,” says Sophie Marjanac, an attorney with ClimateEarth.

It can’t be an accident that the main expert the California cities brought to the climate tutorial was none other than Myles Allen, the scientist who started this whole idea 15 years ago when the flooding Thames was at his door. At the tutorial I wondered why, with climate scientists thick on the ground of Bay Area universities, those lawyers flew someone from Oxford. Seems like it was to bolster the case for attribution.

The International Energy Agency says that Earth can solve its climate problems with a $53 trillion. That money has to come from somewhere. Environmentally-minded investment practices might be one approach. So is using the courts to extract some money from the people responsible. “When people can’t get change made through other processes—dealing directly, a political process—the other branch of government is the judicial branch,” Patton says. “That’s where people go to resolve disputes.” And now science is walking in with relevant evidence.

Not a moment too soon. On Monday it was 122.4 degrees in Pakistan. And on Tuesday, atmospheric carbon dioxide reached 410 parts per million—the highest it has been since before humans existed.

Robo Wunderkind wants to build the Lego Mindstorms for everyone

GizmoCrazed - April 8, 2018 0
Lego Mindstorms have paved the way for many programmable toys. And Austrian startup Robo Wunderkind is building a new kind of Lego-like programmable kit....

Boston-area startups are on pace to overtake NYC venture totals