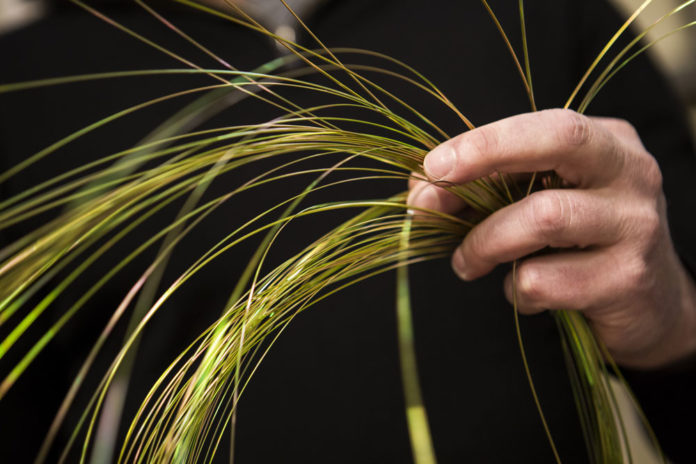 He believes this is more than a trivial distinction. Our clothing has as much as 20 square feet of external surface area, touching nearly every part of the body. That means a piezoelectric textile could potentially hear our surroundings, sense our movements and monitor internal organs, such as our heart and lungs, with unprecedented fidelity. It could also generate energy as we walk.

And piezoelectricity is only one of many electronic capacities Fink’s lab is systematically mastering. Michael Rein, a former grad student of Fink’s and now a senior product engineer at AFFOA, has been drawing fibers that contain tiny diodes, semiconductors that can alternately emit or detect light. Woven into a fabric, they’ll be able to electronically change a garment’s appearance or allow for remote communication. In his thesis work, Rein demonstrated that these functional fibers are washable — an important milestone on the road from lab to marketplace.

As with any electronics, multiple components will be able to do far more collectively. For instance, by combining Rein’s diode fibers with Khudiyev’s piezoelectrics, “you could communicate at a distance,” observes Fink’s grad student Grena. The diodes could detect a voice-controlled laser beam and make the piezoelectric fabric vibrate so that troops could hear their commander’s orders on a chaotic battlefield. Conversely, vital signs measured by piezoelectric fibers could be relayed to a medic by light-emitting diodes (LEDs) on a wounded soldier’s uniform. Grena also foresees advantages in terms of scale, especially for sensor networks. Fibrous electronics can be stretched very thin to extend over vast distances. A piezoelectric mesh could take large-scale measurements, like bridge strain or ocean currents.

At the opposite extreme, Anikeeva is applying Fink’s fiber-drawing technique to neuroscience. Her flexible filaments take advantage of the miniaturization afforded by fiber drawing, combining optical waveguides with conductive electrodes and fluid channels to create a probe thinner than a human hair. A single probe can deliver drugs and measure neural activity in a brain or spinal cord without damaging tissue. It can even stimulate neurons that have had their DNA modified to respond to light, making it a powerful and versatile tool in the emerging field of optogenetics. “The fiber-drawing process,” says Anikeeva, “is the enabling capability.”

At MIT’s Computer Science and Artificial Intelligence Lab, Fink shows off some of the first products developed by AFFOA. He presents backpacks with unique barcode-like patterns woven into the fabric; an ordinary iPhone camera can scan the pack from across a room to bring up information, like a quote or a song, through a program the wearer can enable and use with a phone. He also shows off baseball caps woven with diodes that sense signals from overhead lights. The signals are sent by flickering the lighting more quickly than our eyes can perceive — a system that could help future wearers navigate disorienting buildings like hospitals and airports.

Toward the end of his presentation, Fink shows an organizational chart representing the design and production trajectory for his navigational baseball cap. Specialized threads, with technology from MIT, could be modeled and drawn at AFFOA. Textiles could be spun at Inman Mills in South Carolina. AmeriCap in North Carolina should be able to assemble those textiles into hats. And systems integration with the lighting could take place in the AFFOA prototyping facility, in collaboration with Massachusetts-based Analog Devices.

“Most university intellectual property is sitting on a shelf,” Fink explains. “And the reason is there’s a gap between where research ends and production begins.” With AFFOA and its approach to projects like these, the gap is eliminated.

“Functional fabric is one of the most transdisciplinary fields of our time,” says Genevieve Dion, director of the Shima Seiki Haute Technology Laboratory and an AFFOA leader at Drexel University. She and Fink crossed paths while attending a meeting that would lead to AFFOA, which benefits from her background in fashion. She, in turn, has brought her sociology colleagues on board. As groundbreaking as the materials coming out of Fink’s lab may be, Dion believes their adoption will depend on addressing real human needs in ways that people find appealing, issues that are more readily taken up by designers and sociologists than engineers. “We have to get beyond, ‘Let’s make Google Glass. It will be so cool that everyone will want it,’ ” she says.

For Dion, the obvious place to start using functional fibers and fabrics is in health care, especially for people with conditions that need constant monitoring and treatment. Functional fabrics might not only provide better support, but they could also eliminate the stigma of looking different. “We’ll be successful with wearable technology as medical devices when nobody can tell you’re wearing them,” she says.

Characteristically expansive, Fink carries Dion’s vision into all domains. His conversation spans from T-shirts to diapers. “People ask, how’s this fabric going to look?” he says. “Actually it’s not going to look any different. But it’s going to do a whole lot more.”

What Once Was Lost

GizmoCrazed - October 9, 2017 0
How neural stem cells repair damage from strokes, spinal injuries and aging. Kris Boesen’s life changed in an instant. In March 2016, he was driving...

In-House Data Center vs Colocation Facility: A Complete Guide to the...