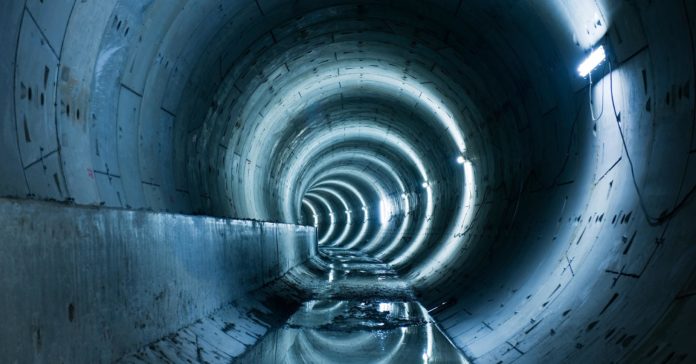 I can’t sit here and guarantee you a robot won’t take your job one day—capitalism kind of has a thing for automation. What I can tell you is that in the near future, robots will be doing jobs that no one wants to do. For instance, risking your life doing rescue operations after mining disasters.

Which is why for its next robotics competition, Darpa is going underground, with the Darpa Subterranean Challenge. If you don’t remember, that’s the same far-out federal research agency that put on the Grand Challenge (which helped kick off the self-driving car revolution), and the Robotics Challenge (which helped get humanoids walking among us). And now it’s calling on researchers to autonomously explore the innards of Earth.

At the TechCrunch Sessions: Robotics conference at UC Berkeley on Friday, the agency gave some clues to a crowd of potential participants about the trials and terrors their robots may face when the challenge kicks off next year.

The challenge will consist of three unique environments. In the first circuit, robots will make their way through tunnels, followed six months later by an underground urban environment, followed six months later by caves. A year after that, teams will navigate a course that includes elements of all three. Although Darpa defines “navigate” loosely: Teams can either tackle the courses physically, or design a simulated spelunker.

Darpa isn’t giving the teams specific tasks, yet—in the Robotics Challenge, for example, robots had to negotiate an environment made for humans, turning valves and climbing stairs and even driving a cart. But it’s clear that they’ll have to deal with some seriously difficult terrain in the Subterranean Challenge, and do it autonomously. After all, connectivity is kinda spotty down there.

“If I’m going through tunnels in urban environments, now I went from having hands-and-knees crawling to turnstiles and escalator frames,” says Timothy Chung, a program manager at Darpa. “How do I span all of the challenges of all those types of environments?”

By getting very creative, is how. A robot may have to climb some stairs, then squeeze through a narrow space in a cave, then tackle mud or even a waterfall. Which means there’s no one form factor that will clearly reign supreme.

Take what happened in the Darpa Robotics Challenge. Robots had to do human tasks, so naturally, teams deployed the humanoid form factor. But a traditional humanoid wasn’t the way to go for everyone. Carnegie Mellon, for instance, deployed a vaguely humanoid machine called Chimp that rolled on its limbs instead of walking. That gave it extra stability. And RoboSimian only looked like a human if you were under the influence of one or more psychedelics.

So maybe the right robots for this new challenge won’t be what you’d expect. A quadcopter might do well in the open environment of a human-made structure, but it would smack into the wall of a tight cave pretty quick. A tracked vehicle might do well in tunnels, but get stuck in tight spaces. And I’m betting you’ll see more than one so-called soft robot, which is made of squishy material instead of metal. Some robotic prototypes inflate and elongate, which would be good for squeezing into the tight spaces you’d find in a cave.

And teams won’t be limited to a single, very expensive robot like in the Darpa Robotic Challenge. This will be more of a robotic team effort. So maybe competitors will develop a soft robot for exploration and pair it with a bulkier tracked vehicle that builds a map with lasers. Or, as roboticists have already developed elsewhere, a tracked vehicle with a drone tethered to it.

With such little time between the three events and the final, teams will have to plan, not react. “The idea there is you can’t go back to the drawing board necessarily in those short six months,” says Chung. “You’ll want to have thought about some of the solutions ahead of time.”

But the form factor is just the beginning of a roboticist’s troubles. The machines may have to build a map of a certain resolution, or search for a person or a gas leak. “The reason why this is hard is not just because the terrain is hard, it’s not just that there’s no GPS,” says Chung. There will at times be no light, and shining your own light can bounce off shiny surfaces and confuse sensors. “Turns out there’s a lot of dust in these environments that really hammers away at your lidar or your radar type solutions.”

And—plot twist!—the robots may need to use some help from machines at the surface. “It need not be just robots—this is not the Darpa Subterranean Robotics Challenge,” says Chung. Ever-more-powerful technologies like ground-penetrating radar can map caves from above.

Then, of course, there will be the purely simulated track of the challenge. (Video above is the simulated portion of the Robotics Challenge.) Those competitors will create subterranean environments with software from Open Robotics, which also makes the Robot Operating System that powers a whole slew of machines around the world. Teams will write their own controls for each theoretical robot (potentially dozens of machines if they wanted—think a swarm of robot cockroaches) to interact with the simulated environment, then submit that to organizers, who will test everyone’s submission in the cloud.

“Up to the limits of our ability to set up environments and have computational resources to run them, we can set up an almost infinite set of experiments that we can run teams’ code through,” says Brian Gerkey, CEO of Open Robotics. So they’re testing advanced robots without spending a bunch of cash on advanced robots. (Not that these teams are being cheap—simulators are a pivotal way to train robots before they explore the real world, and the work in this challenge will no doubt advance the field.)

The idea here isn’t for Darpa to discover the perfect robot that will trek into a subterranean rescue situation. That’d be nice, but this is more about advancing robotic autonomy in general, by putting the machines through some of the worst conditions on Earth.

After all, the Darpa Robotics Challenge didn’t produce a humanoid machine fit for every home, but it did help advance research into bipedal locomotion and manipulation. And over a decade ago, the Darpa Grand Challenge didn’t gift the world a fully functioning robocar, but it did spark the tech behind the test vehicles scooting around cities like San Francisco and Pittsburgh. Even if that original code from the competition isn’t powering self-driving car technologies today, says Chung, “the culture, the experience, and the knowledge base kind of grew over the past decade.”

Maybe the Subterranean Challenge can do the same for autonomous robots of all kinds. Not all of them will make it out of the depths alive, but better them than us.

GizmoCrazed - May 8, 2016 0
Wheels have long been a sign of economic status for both individuals and nations, and on the lightly trafficked streets of Pyongyang, the capital...

This Chemical Is So Hot It Destroys Nerve Fibers—in a Good...