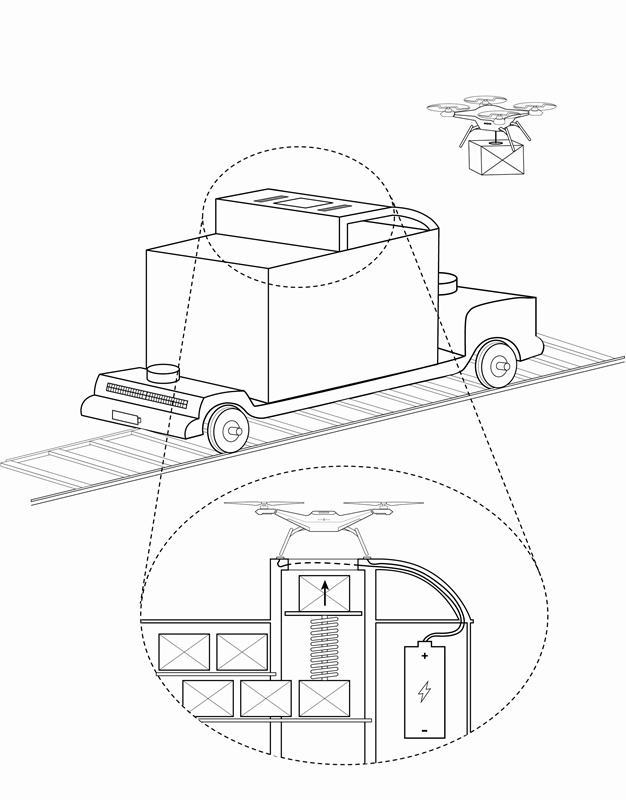 A research company is seeking funding to build a prototype autonomous, battery-powered flatcar that would serve as a platform for package-delivery drones.

Cambridge Research & Development in New Hampshire has applied for a patent for the concept. The vehicle, Cambridge founder and CEO Ken Steinberg says, could carry and deliver freight or serve as a moving platform for autonomous package-delivery drones.

The idea is to take advantage of railroad capacity that goes unused on commuter and freight lines at night and other off-peak hours, Steinberg says. A railroad could lease track space to package-delivery companies such as UPS, FedEx, or an electronic retailer such as Amazon, he says.

Steinberg came up with the idea while pondering the excess capacity on the lightly used Pan Am Railways Northern Main Line, the former Boston & Maine route that passes behind his house.

His “a-ha” moment was this: “We could basically take Teslas and put them on tracks and run them autonomously.”

Drones could take off from the rail vehicle, pick up or deliver a package, then return to the flatcar — or a different one further along the route — for recharging or a battery swap before heading out on another delivery mission, Steinberg says.

“You could deliver a lot of packages that way,” Steinberg says.

He did some back-of-the-envelope math and found that 5.5 million people live within a 5-mile flying radius of the former B&M main from Boston to Manchester, New Hampshire.

The vehicles could operate solo or, like an electric multiple unit, be coupled together to form a train. They also would be designed as bi-modal vehicles that could get on and off track, much like a hi-rail vehicle. They could also operate in conjunction with positive train control and be capable of running in signalled or unsignalled territories.

Steinberg — who has a tech background and admits he’s a railroad neophyte — has consulted with a former Class I railroad operations executive and is seeking partners in the rail and package-delivery industries who might be interested in testing the concept.

Cambridge R&D aims to raise $2 million to build a prototype, with the goal of licensing the patent and technology to a company that would then commercialize it and bring it to the marketplace.

The vehicle, if commercially feasible, would face regulatory and operational hurdles.

Trains have the right-of-way at grade crossings, for example, but it’s not clear whether an autonomous flatcar would be considered a train or something more akin to a hi-rail car or maintenance-of-way equipment, which must yield to traffic at crossings.

GizmoCrazed - January 31, 2019 0
This is not a story about how the polar vortex is bad—bad for the human body, bad for public transportation, bad for virtually everything...