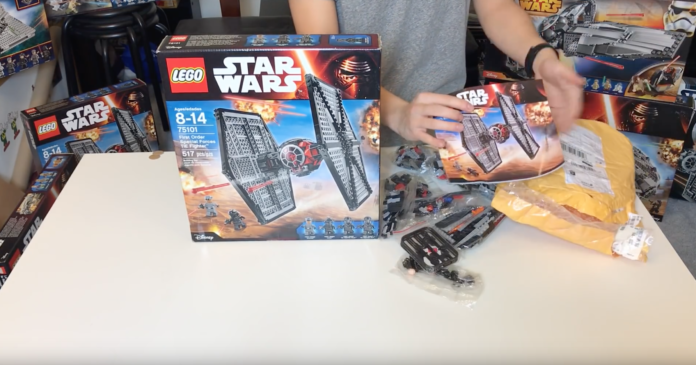 Lego – or LEGO – is expensive and kids – my kids in particular – want a lot of it. Our basement looks like the returns department of a major toy store, covered from corner to corner with toys and, most notably, and endless minefield of little building blocks. And we enjoy building models and imaginative play and my youngest child, Guthrie, loves Star Wars. But all that quality plastic is expensive and the Star Wars kits are the most expensive of all. What are we to do? Add his favorites to holiday gift registries so his grandparents can buy it for him? Spend hundreds of dollars on ships that crash and leave a field of debris and minifigs for miles? Or do we turn to the Internet, that fount of all solace, and find Lepin.

A long time ago in a galaxy far, far away there were Lego knock-offs. The most popular come from a company called Lepin which I first learned about from this surprisingly complete review of the First Order Tie Fighter set. This video, which features a surprisingly thorough look at Lego vs. Lepin, was a family favorite for a while, taking precedence over the Star Wars trailers and Bad Lip Reading my kids usually watched. They were mesmerized by the slow and steady pace of the video and I was mesmerized by the thought that I could save some money on my Lego.

Before you get excited about the morality or legality of these knock offs understand that I well know that Lego deserves every penny they get. After building the Lepin set I began to better understand the care that goes into a good Lego set and the satisfaction of having a product that doesn’t fall apart mid-flight. That said, this was an experiment and it was truly to surprising to see such a complete and blatant copy of Lego’s kit come in a plain brown paper sack. Unlike other knock-offs I’ve seen – swap meet Louis and fake Rolexes, for example – the Lepin kit was a one-to-one copy of the original, albeit with a few major issues.

So I hit Alibaba and bought the Tie Fighter kit, a model that at once pushed all the right nostalgia buttons for me and the excitement buttons for my children and was sufficiently complex and expensive that we didn’t want to order the real model. I would build this Tie Fighter… for science.

The kit cost $48 with $12 shipping and arrived in two weeks. It came in a plain brown padded envelope with an instruction manual and little bags of pieces. The Lepin pieces aren’t organized in any discernible way although some of the larger pieces are stuck together in the same bag while smaller pieces are crammed inside multiple smaller bags. There is no bag order and the manual does not expect you to open any bag first. Basically your best bet is to dump out all the pieces and get building.

The first thing you’ll notice is that the pegs are completely smooth with a few indented where the injection mold went in. These blocks have no Lego branding and are instead disturbingly bare, as if someone had sandblasted away the logos on a real kit. The minifigs are also problematic. The faces and painting aren’t quite as crisp as Lego’s and the accessories – in this case a little hose connecting to the pilot’s helmet – was oddly connected to the helmet itself, a cost-saving measure that looks like it could snap off and get lost fairly easily.

Once you’ve organized your pieces you can begin assembling the kit. This is when you meet another cost-saving measure. The manual shows only the piece you just assembled in color. The rest of the pieces are greyed out. This means you don’t know what the kit is supposed to look like as it’s being built which makes it especially hard to assemble the internals. Further, the entire manual is chock full of steps. While the Lego kit paces you through each step, placing one or two steps on the page, this manual is chock full of them. It’s very easy to get lost. 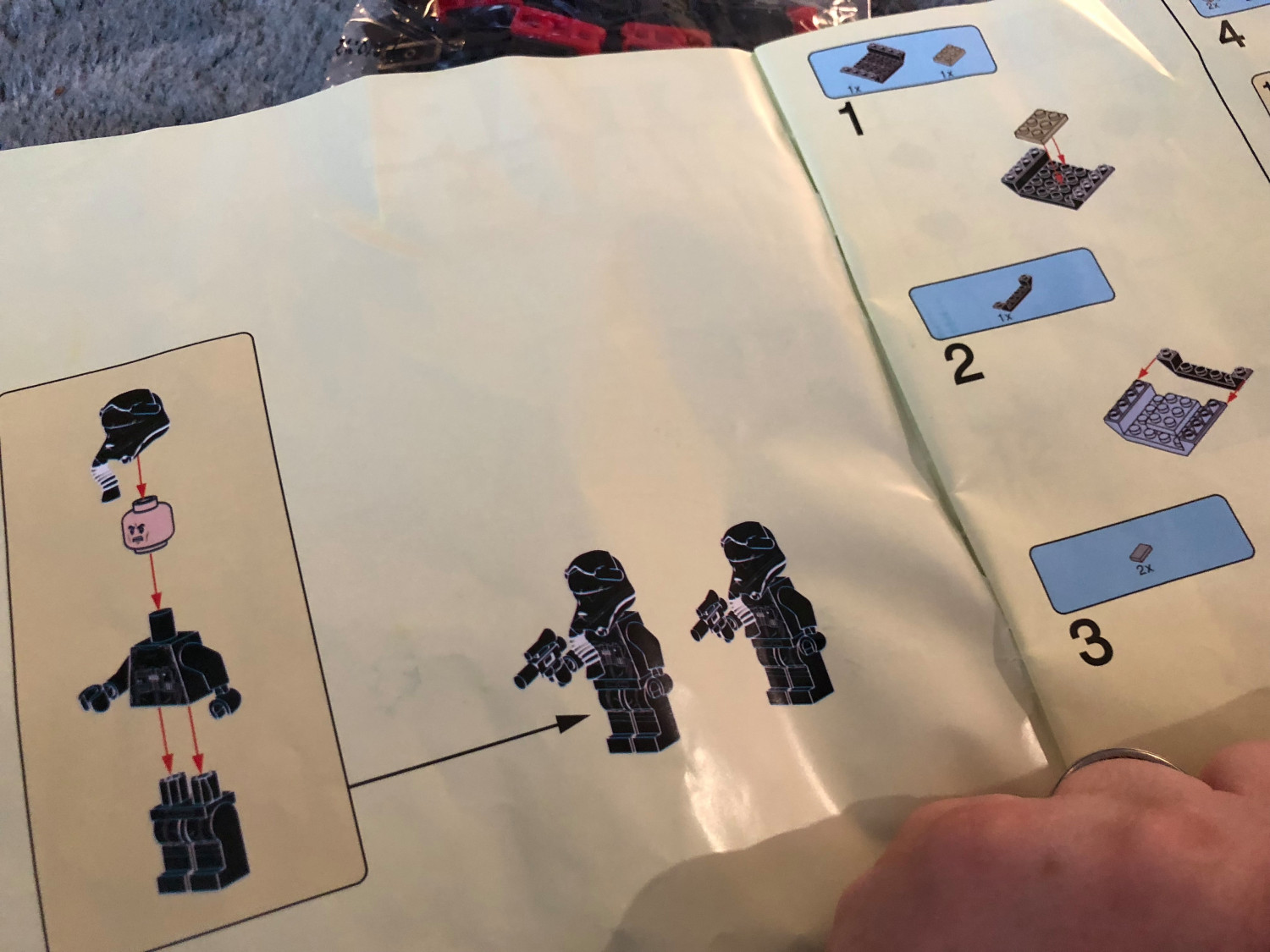 We built this model in two days. My son was able to build quite a bit of it but I stepped in at the end because I liked the challenge and he got bored. Soon we discovered the fatal flaw in the Lepin system: the models don’t stick together.

My wife’s father used to make injection molded toys. He always speaks reverentially of Lego, repeating to us over and over that the company repeatedly destroys is plastic molds to make new ones, thereby ensuring that each piece is crisp, clean, and straight. The molds, you see, are the most expensive part of the process, costing tens of thousands of dollars to manufacture. To create new molds for something as complex as this is wildly costly but, as far as plastics lore goes, Lego is more than willing to spend that cash.

As you begin building you’ll find that some of the straight pieces curl up. The hinges don’t quite stick together. The big boards don’t quite match. As you build you find yourself wondering if the whole thing will hold and, in the end, it won’t. For example, this model uses four little U clamps that stick out on each side to connect to four bars embedded into the wings. These U clamps sometimes seem to click into place but when they don’t the wings fall off and break, requiring another ten minutes of rebuilding. These are not built for rough play – or any play at all – because even the hatch into which you slide your pilots will fall off if you close the door all the way. The tolerances – those sweet, Danish, Lego tolerances – are gone here, leaving behind something that is best displayed on a shelf.

If you or your kid are fine with having knock-off Lego on a high shelf where no one can get a better look at it then by all means pick up a model or two. But understand you will be disappointed. While this is a near exact clone of the original kit, the little differences add up to a mess. This Tie Fighter is currently next to our hermit crab cage, untouched, while Poe Dameron’s X-Wing is regularly strafing Storm Troopers and the rest of the Lego is being repurposed into bases, houses, and Minecraft adventures. The only toy that isn’t being played with is the Lepin kit.

That says a lot. Sure you can save money, but should you? Lego shouldn’t cost so much and our kids shouldn’t want so much of it but, in the end, aren’t we teaching them the value of tactile play, the power of building out of constituent parts. Further, I won’t begrudge a kid who wants to play with Lego the ability to build their own Tie Fighter if this is all they can afford. But, in the end, Lego wins in a head-to-head, minifig claws down.

Should you buy Lepin? The stalwart brand defender in me says no. However, if you’re looking to save a buck and want to give your kids the joy of building a knock-off – but not the joys of playing with it – then you can probably get away with this little bit of C-3PFaux. May the Force, as they say, be ever in your favor.