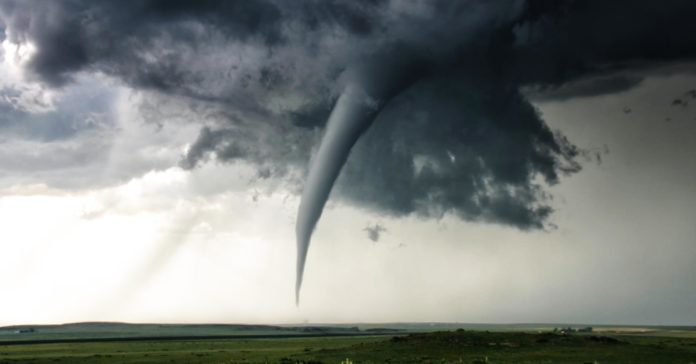 Along with the roar of a grizzly bear and a crack of lightning, the sound of a tornado is among the most terrifying natural sounds on Earth. Depending on the twister and where you’re standing, it can sound like a hiss, a buzz, a rumble, or even a freight train. It’s the auditory manifestation of trouble.

But tornadoes also seem to emit low-frequency sound waves called infrasound that the human ear can’t hear. What’s more, storms may emit characteristic infrasounds perhaps an hour before they develop into tornadoes. How great would it be if scientists could detect these sounds, pinpoint the size and location of an impending twister, and better warn communities?

An infrasound array deployed on a roof.

Researchers are chasing just that. Today at the Meeting of the Acoustical Society of America, engineer Brian Elbing of Oklahoma State University is showing how he and his team were able to use microphones to detect the signal of a tornado 10 minutes before the twister formed 12 miles away. Not only that, afterwards they were able to estimate the tornado was 150 feet in diameter, and indeed the official report of the destruction path confirmed that.

So how does infrasonic tornado detection work? The hypothesis goes that the infrasound is produced by pressure fluctuations in the middle of the twister. “You could think of that like a speaker, where you’re compressing and expanding the air,” says Elbing. “The lower you drop that pressure, the larger that fluctuation will be and the louder it will get.” From this frequency of the infrasound, the team was able to estimate the size of the twister.

So yeah, a tornado is a massive speaker tearing through the countryside, blaring sounds the human ear can and can’t detect. But Elbing’s trio of microphones, spaced 200 feet apart, can determine the direction of a tornado by calculating the minuscule difference in time it takes for the sound to reach one device versus another (the third microphone is for redundancy). It works a lot like your own ears do, to tell you the direction from which sounds originate.

Elbing seals each microphone in a little dome, and each is connected to four soaker hoses (yes, the ones you’d find in a garden), laying out the lines in a clover leaf pattern. This microphone flower, if you will, also picks up the noise of local wind. That’s bad, because that literal noise also translates into data noise mixed in with the infrasound the researchers are after.

What’s not as random is the infrasound coming from a dozen miles away. “A large geophysical source like a tornado will have a much more uniform pressure wave,” Elbing adds. “Those waves that go into the hose and go into the microphone, those will add together instead of canceling each other out.”

The system is still in its early days, and will require a lot more observational data to optimize the early detection and pinpointing of tornadoes. (To actually pinpoint, you’d need multiple microphone arrays.) But as the system evolves, scientists could turn it into a data collection tool unto itself if they can predict where tornadoes will touch down. “Possibly up to an hour beforehand, you could start deploying drones to that location and collecting data,” Elbing says.

And boy, do researchers need more data. “I often tell people that the atmosphere is dirty,” says Kevin Knupp, an atmospheric scientist at the University of Alabama in Huntsville who is unaffiliated with Elbing’s work. “It’s not clean, it has a lot of variability. And the same can be said for storms that produce tornadoes, no two are alike.”

Researchers are only beginning to understand how tornadoes produce infrasound and how other atmospheric conditions affect the transmission of sound from storm to microphone. But it could be a powerful avenue into better warning systems. “One can speculate that if infrasound is reliable, then you could actually have detectors in homes, so it’ll be like a smoke alarm,” Knupp says.

A more accurate infrasonic detection method would certainly be welcome: Consider that three-quarters of the time officials issue a tornado warning, one doesn’t form. “So in places like Oklahoma, where tornado warnings are a common thing, people just straight up ignore them,” Elbing says. “When I moved here from Michigan I was shocked. A warning is going off and I’m like, I gotta get home, I gotta get my wife and kids and get them safe, and there’s people mowing their lawns.”

So maybe to better understand tornadoes, humans just have to be better listeners. With the help of garden hoses, of course.

GizmoCrazed - October 28, 2011 4
A few weeks back we reported that Apple has overtook Nokia in a race to become the world's top smartphone manufacturer. Well, Apple's reign...