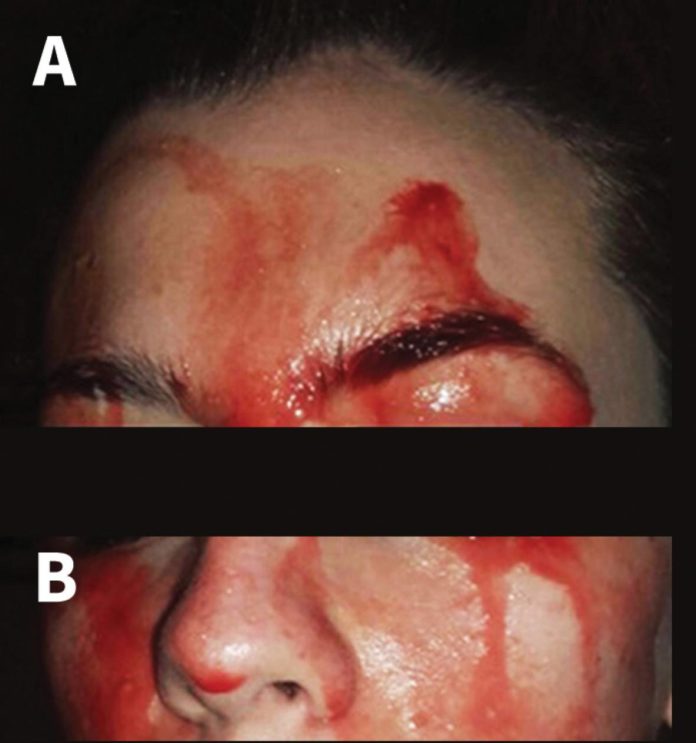 An Italian woman says she had been sweating blood for three years. (Credit: CMAJ)

We’ve all heard of sweating bullets, but this is something else entirely.

A medical case report from Italian researchers last year details a 21-year-old patient who began mysteriously sweating blood from her face and palms. The condition had been ongoing for about three years, the Canadian Broadcasting Corporation reports, when she decided to check herself into a hospital — needless to say, the doctors were perplexed.

Strangely, the young woman was otherwise totally fine. She wasn’t sick, hadn’t been injured recently, and had no history of medical problems. She just happened to have blood coming out of her skin. Though the patient was understandably distressed about her condition, doctors were able to treat her with propranolol, a heart and blood pressure medication, which helped to reduce the bleeding, though it didn’t stop it entirely.

Though the condition sounds almost biblical, researchers from the University of Florence say it’s actually a known phenomenon. In a paper published in the Canadian Medical Association Journal, Roberto Maglie and Marzia Caproni, say that the patient seems to have been experiencing hematohidrosis, a mysterious condition characterized by blood commingling with sweat.

Though rare, a 1996 review (titled “Blood, Sweat and Fear”) turned up 76 cases on the condition in the medical literature. A separate review by Canadian medical historian historian Jacalyn Duffin found 18 reports published just since 2000, the CBC says.

Hematohidrosis isn’t entirely understood, but a 2013 paper suggests that it’s related to stress. Tangles of blood vessels surround the sweat glands in our faces, and during periods of intense stress, hormones cause these vessels to constrict. When the stress passes, they open up again, and in some cases, the process could happen quickly enough to cause some of the vessels to burst. The leaking blood mixes with sweat and oozes out through our pores.

Interestingly, both the 2013 paper, which documented a 12-year-old girl from India who was sweating blood, and this latest report don’t mention stress as a corollary to the condition. Other proposed causes include vicarious menstruation, excessive exertion, psychogenic factors and systemic diseases, though there’s really no consensus at the moment.

Reports of bloody sweat go back to the time of Aristotle, according to medical historian Duffin, though it can often be difficult to separate mentions of religious tales like the crucifixion of Christ from actual case reports. It’s most commonly reported in people experiencing extraordinarily stressful events, such as men condemned to execution, a soldier before battle and a passenger aboard a storm-tossed ship.

Though sweating blood in and of itself sounds stressful enough, if you’re staring down imminent death it may be the least of your worries.

GizmoCrazed - September 12, 2012 2
The newly announced Apple iPhone 5 will be available for pre-order on September 14th, while shipping of the device begins on September 21st. Availability: The iPhone...

Stay Inside, Californians: Wildfire Smoke Is a Big Health Risk