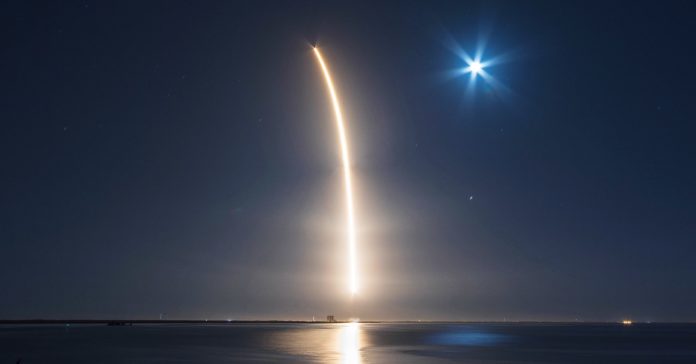 NASA’s newest galactic scout is ready for duty. The Transiting Exoplanet Survey Satellite (dubbed TESS for short) is set to embark on a two-year mission to scour our cosmic neighborhood for potentially habitable worlds. But first, it’ll need a boost from SpaceX.

Exhaust plumes billowed around Pad 40 at Cape Canaveral last Wednesday as SpaceX successfully test-fired its Falcon 9 rocket. Today, if all goes as planned, it will roar to life at 6:32 pm EDT, lofting the refrigerator-sized TESS spacecraft into orbit.

The Falcon 9 used for this flight will sport a brand new first stage booster—the final block 4 version before the upgraded block 5 version rolls out next month, which will sport upgraded engines and enhancements that will ease reusability. Once the first stage has done its job, it will return to Earth, where a drone ship will be waiting in the Atlantic Ocean to catch it.

The TESS satellite will survey the sky in search of small dips in the light emanating from nearby stars. Those dips are telltale signs that a planet could be passing in front of its parent star—an event astronomers call a transit.

TESS’s predecessor, the Kepler Space Telescope, also used the transit method to become the most prolific planet-hunter in history. In the course of its mission, it identified thousands of candidate planets beyond our solar system. Astronomers have validated 2,600 of its observations, and thousands more are awaiting confirmation. But mission scientists expect TESS to find even more exoplanets, by surveying a patch of sky hundreds of times larger than the one eyed by Kepler.

TESS’s planned path through space will make for tricky launch logistics. Both the moon and the spacecraft need to be in the proper place so that crucial lunar-gravity assist can happen. Today’s launch window, for example, only extends for 30 seconds. And if any issues arise, there will be other launch opportunities throughout the month, but not every day. If the probe cannot launch by April 26, the team may have to stand down for up to 45 days to accommodate the launch of NASA’s InSight Mars mission. Per congressional mandate, TESS must launch by June 30.

But even before today’s launch could happen, SpaceX’s upgraded, full-thrust variant Falcon booster had to meet all of NASA’s requirements.

Different payloads require different launch certifications. While SpaceX routinely delivers cargo and science experiments to the International Space Station, it rarely launches scientific spacecraft. The company hope to change that moving forward. SpaceX has lofty goals of eventually launching a variety of payloads every few days. In order to make this happen, the company has made advances to their Falcon 9 rockets over the years. The 2016 launch of the Jason-3 mission marked the launch of the last Falcon v1.1 rocket, which was the last SpaceX vehicle certified to launch science payloads for NASA.

According to NASA’s Launch Services Program—the department that oversees the launch of all uncrewed spacecraft—obtaining a new certification is a lengthy process that can take up to two years. SpaceX had previously earned the proper certification for the v1.1 Falcon. “However, the Falcon 9 ‘Full Thrust’ variant uses densified propellants and was judged to need a new certification,” explained an LSP spokesperson in an email. SpaceX completed the required certification process in January 2018, which according to NASA, also covers the upcoming Block 5 model.

With this certification, and three active launch pads across the US, SpaceX is on track to significantly increase its launch cadence. Last year, the company had 18 launches; if today’s goes as planned, it will have eight on the year, translating to a 2018 average of one launch every two weeks.