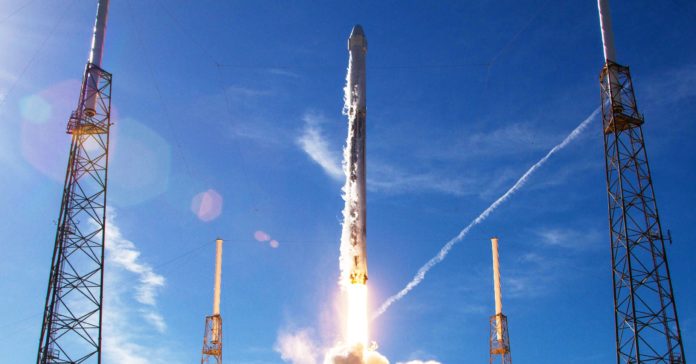 Update: SpaceX successfully launched its Falcon 9 rocket on a mission to resupply the International Space Station.

Another day, another SpaceX launch. On Monday at 4:30 pm ET, the commercial space company is slated to propel a previously-flown Dragon cargo ship into low Earth orbit aboard a used Falcon 9 rocket. The Dragon spacecraft, which is carrying food and supplies for the International Space Station, is scheduled to dock with the orbital outpost on Wednesday.

The cargo run will mark SpaceX’s 14th resupply mission to the ISS, its seventh Falcon 9 launch this year, and its second such launch in less than a week. Last Friday, one year to the day after launching and landing a used rocket for the first time, the company deployed a used Falcon 9 rocket to send 10 Iridium telecommunications satellites into orbit from Vandenberg Air Force Base in California. (SpaceX has now launched five missions for Iridium, but it has only used three boosters—the power of recycling!)

On the other side of the country, the Dragon capsule currently awaiting liftoff from Pad 40 at Florida’s Cape Canaveral Air Force Station is loaded with close to three tons of grub, gear, and research equipment. Among these are the Atmosphere-Space Interactions Monitor—a suite of of optical cameras, photometers, and an X- and gamma-ray detector designed to study upper-atmospheric lightning and its relationship relationship to Earth’s climate, and a nice complement to the Geostationary Lightning Mappers aboard NASA’s next generation weather satellites. Also aboard are the Veggie Passive Orbital Nutrient Delivery System (an experimental method for growing food in microgravity), and the Multi-use Variable-g Platform, aka “MVP,” a temperature- and humidity-controlled artificial gravity machine about the size of a microwave, with space inside for a range of biological samples, from cells, to fish, to flatworms.

About 10 minutes after Monday’s launch, the Dragon will deploy its solar arrays and begin firing its thrusters with its sights set on the ISS. From aboard the space station, NASA astronaut Scott Tingle will assist Japanese astronaut Norishege Kanai in capturing the Dragon capsule with Canadarm2, the 58-foot-long robotic grappling arm, and mating it to the station’s Harmony module. There, it will spend approximately one month before detaching and returning to Earth.

In truth, the most significant thing about the day’s cargo run may be that there is little novelty to it whatsoever. Which is, of course, SpaceX’s grand vision: To make rocket launches repeatable, reliable, quotidian. To achieve that vision, it’ll need to up its launch cadence, which it appears to be doing: In 2017, the company launched 18 rockets. If Monday’s liftoff goes as planned, it’ll have seven on the year already, putting it well on track to exceed last year’s high-water mark.