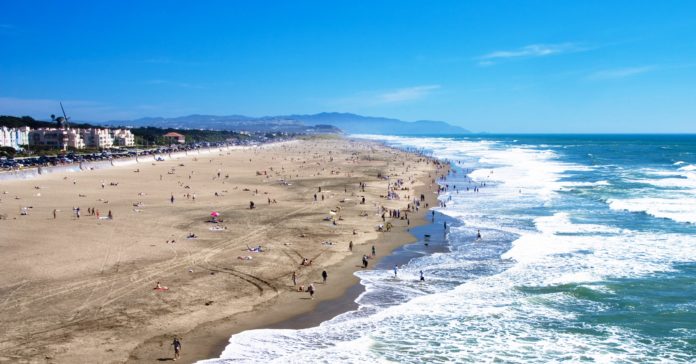 Most mornings when I step out of my San Francisco apartment, I hear the waves, the seagulls, and occasionally kids yelling out the window across the street. But over the past few weeks, the murmur of Ocean Beach has been cut with a low mechanistic rumble. Walk a few blocks and pop your head over the sand dunes and you’ll find the culprits: orange-yellow tractors piling sand into dump trucks, which caravan three miles south and spit out the sand—50,000 cubic yards, or 75,000 tons, of it in total—back on the beach.

That sandy exodus is part of San Francisco’s campaign to fight severe erosion at the southern end of the beach that faces the Pacific Ocean. During a big storm, the bluffs can lose 25 to 40 feet—which might be fine, if the city’s wastewater infrastructure didn’t run right alongside the beach. Specifically, a 14-foot-wide pipe that ferries both stormwater and sewage. If the sea steals the Earth that supports it, the thing could well snap.

The problem at Ocean Beach will only get worse, because the sea has nothing to do but rise in this era of rapid climate change. So will San Francisco spend the rest of its days shoveling sand in a quixotic battle against inevitability? Far from it—it’s all part of a plan to adapt to inevitability, which could set precedent for how this and other coastal cities fight rising seas.

Climate change modeling is complicated: It takes burly supercomputers crunching a galaxy of variables to understand, say, how a warming arctic might be mucking with weather in the United States. But sea level rise? “It’s the one area in climate change that’s probably more understood than others,” says Anna Roche, project manager at the San Francisco Public Utilities Commission, which is overseeing the digging. “We actually have calculations for how much sea level rise we’re anticipating, and you can start making decisions on actual numbers, versus more just pie-in-the-sky discussions.”

Which is not to say those decisions come easy at Ocean Beach. “There’s the whole jurisdictional puzzle,” says Ben Grant, urban design policy director at the San Francisco Bay Area Planning and Urban Research Association. The National Parks Service runs the beach, the San Francisco Recreation and Park Department owns the road that runs along it, and it’s all under the regulatory purview of the California Coastal Commission. “There’s just all these different components that need to be considered and balanced.”

What Grant and his colleagues helped craft is a plan that has all those stakeholders and the public. The idea is to replace that beachfront road’s two southbound lanes—that’s the Great Highway extension—with a trail as early as this winter. This is known as managed retreat: triaging the infrastructure you’re willing to lose. “By backing up a few hundred feet, you lessen the erosive pressure on the beach and you get a more stable beach,” says Grant.

Meanwhile, engineers will continue to bring in outside sand. But now it’ll come from the Army Corps of Engineers’ regular dredging of shipping channels in the San Francisco Bay—perhaps 10 times the amount the city is currently trucking in from up the beach. This is known as sacrificial protection: dumping sand you know full well will wash away, but will in the interim act as a buffer.

One choice that’s definitely not on a table: doing nothing and letting the sea roll in unabated. “It would be upwards of $75 billion in just replacement costs,” says Diana Sokolove, principal planner at the San Francisco Planning Department, which helped craft the city’s Sea Level Rise Action Plan. “That doesn’t even include lost tax revenue or the emotional costs of relocation or lost jobs.”

While it’s relatively easy to map where rising seas are going to inundate land (elevation, elevation, elevation), it’s harder to determine what problems those risings seas are going to cause. The northern coast of San Francisco is particularly low-lying, so its potential for unpredictable flooding—especially during storm surges—is high. And much of the San Francisco Bay Area is built on landfill that’s sinking as seas are rising, exposing some areas more rapidly than others.

What you do want is what they’re doing at Ocean Beach—keep stakeholders happy, keep the public happy, and figure out how to protect critical infrastructure. We know sea level rise will cause trouble, but it will also unfold over decades, giving engineers and city planners time to perfect what works, and abandon to the sea what doesn’t.

Hopefully the former for Ocean Beach. “This will get us out quite some distance—three, four, five decades,” says Grant. “And long before we get to the end of the lifespan of this set of interventions, we will have to be having another set of conversations based on what we learn.”

What begins with boys and girls playing in the sand with big machines, ideally ends with the salvation of Ocean Beach.

GizmoCrazed - May 4, 2011 1
Facebook is growing at much faster rate than predicted and rumours are that its initial public offering (IPO) could go above $100 Billion. According...

The BBC will run its first podcast ads, powered by Acast

A Clever and Simple Robot Hand