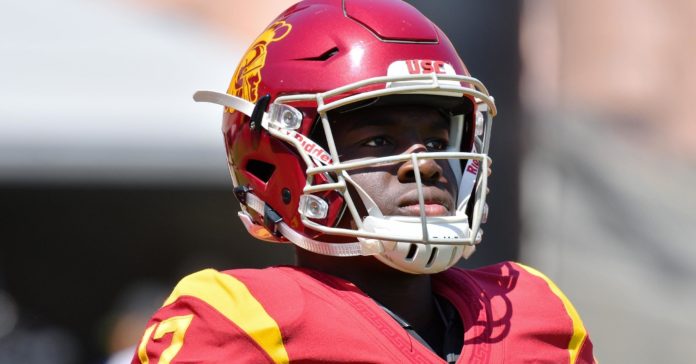 Josh Imatorbhebhe is a wide receiver for the University of Southern California football team. And, um, he can jump crazy high. Take a close look at his vertical jump in the video above. What looks weird about it? It almost looks like he just hangs there at the top of his jump.

Is this normal physics, some type of optical illusion, or just plain magic?

In order to explore this epic jump, the first thing that needs to be done is to plot Imatorbhebhe’s position as a function of time. I can scale this video using Josh’s height (1.88 meters). After that, I can use my favorite free software Tracker Video Analysis to get the position of his feet in each frame. Here’s what that looks like. Oh, just a note—I tried to scale the video using the scale in the background, but something wasn’t right.

When a ball is tossed into the air, its position-time graph should be a parabola. Clearly, this isn’t a parabola since it looks flat at the top (that’s the part where he magically stays in the air). So it’s true—something weird is going on here.

Of course, there is a difference between a tossed ball and a jumping human. The motion of a human can’t be represented by just one point, because humans can move their body. While in the air, a human could pull their feet up which would change the position of the center of mass. This means that although the center of mass for the human moves in a parabola, the feet (or any point) by itself could move in some weirder fashion. A great example of this is the Invisible Box Challenge—where a person appears to step on a box that isn’t there by moving the body in a special way.

So, you can see that fitting a parabola to this data for the motion of the foot doesn’t quite work. The fitting function deviates from the data—especially at the highest point. However, it is somewhat surprising that the parabolic fit gives a t-squared coefficient of -4.9 m/s2 and this would make the overall acceleration have a value of -9.8 m/s2. This is what you would expect for a ball accelerating due to gravity alone.

How about a quick comparison? What would the motion of a tossed ball look like right next to the feet of Josh Imatorbhebhe? I can model this in python (you can see the code here). If the ball starts in the same position with an initial velocity of 0.88 m/s, I get the following.

The red curve is a parabola since it’s an object with a constant acceleration. Notice how the data from Josh’s jump sort of oscillates around the parabolic plot? That’s because the video data is just marking his feet, which does not represent the whole body. As Josh rotates his arms around, it also moves his feet closer and then farther from the center of mass.

It is this oscillation that make it appear that he floats at the top of the jump!

However, this comes at a cost. Notice that the highest the ball travels (red curve) is 1.146 meters. The highest the foot gets is only 1.113 meters. That’s a difference of 3.3 centimeters (1.3 inches). Waving his arms makes a cool effect, but he doesn’t jump as high (as measured by his feet). If he timed his arm swinging correctly, he could get his feet even higher at the cost of a lower apparent “hang” at the top.

Still, in the end it’s a super impressive jump.