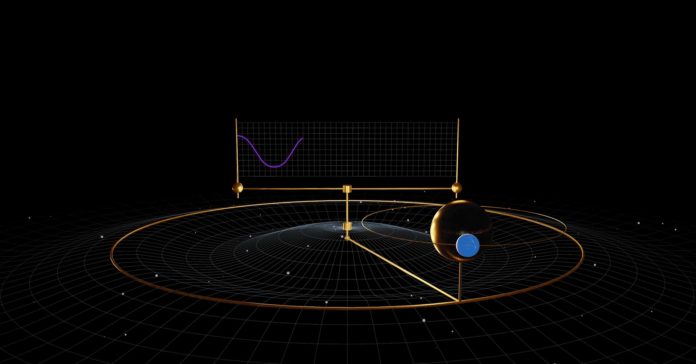 For 20 years, an experiment in Italy known as DAMA has detected an oscillating signal that could be coming from dark matter—the fog of invisible particles that ostensibly fill the cosmos, sculpting everything else with their gravity.

One of the oldest and biggest experiments hunting for dark matter particles, DAMA is alone in claiming to see them. It purports to pick up on rare interactions between the hypothesized particles and ordinary atoms. But if these dalliances between the visible and invisible worlds really do produce DAMA’s data, several other experiments would probably also have detected dark matter by now. They have not.

Late last month, Rita Bernabei of the University of Rome Tor Vergata, DAMA’s longtime leader, presented the results of an additional six years of measurements. She reported that DAMA’s signal looks as strong as ever. But researchers not involved with the experiment have since raised serious arguments against dark matter as the signal’s source.

DAMA searches for popular dark matter candidates called WIMPs, or “weakly interacting massive particles.” The scientists monitor an array of sodium iodide crystals kept deep under Gran Sasso Mountain in the Apennines, looking for flashes of radiation that could be caused by dark matter particles colliding with atomic nuclei in the crystals. As the solar system hurtles through the galaxy, “it looks like a wind of WIMPs coming at you,” explained Katherine Freese, a physicist at the University of Michigan who in 1986 co-developed the idea for such an experiment, “in the same way that when you’re driving it looks like the rain is coming into your windshield.”

A technician works on the detectors for the DAMA experiment, which uses 250 kilograms of sodium iodide in an attempt to find dark matter.
DAMA-LIBRA Collaboration/LNGS-INFN

Exactly in line with this hypothesis, the DAMA scientists find that nuclear activity in their crystals varies throughout the year. The signal always peaks in June, when Earth is moving fastest through the dark-matter-filled galaxy, and troughs in December, when the planet curves into the leg of its orbit that opposes the sun’s motion around the galaxy, slowing us relative to the dark matter wind.

The latest run of the experiment, called DAMA/LIBRA-phase 2, began in 2011. After taking data for six earthly orbits, the team reports that they continue to see a seasonal signal consistent with dark matter. As Bernabei told Quanta by email, “The annual modulation signature and the adopted procedures assure sensitivity to a plethora of possible dark matter candidates.”

Outside experts saw otherwise. In a paper posted April 4 to the physics preprint site arxiv.org, three physicists showed that a standard dark-matter WIMP cannot produce the new DAMA signal. “The vanilla one that everybody loves—that one’s gone,” said Freese, who coauthored the new paper with her student Sebastian Baum and Chris Kelso of the University of North Florida.

Freese and colleagues focused on a new feature of the DAMA data. As part of the DAMA/LIBRA-phase 2 upgrade, the team at Gran Sasso switched out hardware to make their detectors sensitive to lower-energy excitations inside the sodium iodide crystals. Bernabei reported an annual modulation in lower-energy nuclear recoils that was broadly similar to the signal for higher-energy recoils.

But if a vanilla WIMP were really the source of the annual modulation, the low-energy recoils should change relative to the high-energy recoils, wrote Freese and her coauthors. They found that nuclear activity should vary between June and December either much more dramatically, or much less so, at low energies than at high energies, depending on whether dark matter particles are lightweight or heavy. If WIMPs are light, DAMA should see them colliding with light sodium atoms at low energies much more often than with heavy iodine atoms. Overall, DAMA’s signal should be strongest for the very-lowest-energy recoils. Alternatively, heavy WIMPs will interact almost exclusively with iodine atoms at low energies and very little with sodium. Overall, in that case, the signal will weaken as you look at the lowest-energy events.

Instead, neither shift is seen in the DAMA/LIBRA-phase 2 data, “which is difficult to explain with dark matter,” said Jonathan Davis, a theoretical physicist at King’s College London.

In their paper, Baum, Freese and Kelso show that WIMPs can still generate the observed annual modulation if they have a twist: an innate preference for protons over neutrons that will lead them to interact more often with sodium than iodine (which has more neutrons). However, several physicists said this special “isospin-violating” property probably would have affected the results of other dark matter experiments, such as XENON1T, a 3.2-ton liquid xenon detector also located under Gran Sasso, which has seen no such effect.

The eerie silence in XENON1T, and in other catchily named dark matter detectors like LUX and PICO, had already dimmed many experts’ hopes about DAMA. These experiments, which look for telltale nuclear activity in different types of materials, have published a string of null results, ruling out large classes of WIMPs that would be compatible with DAMA’s signal. (Other dark matter candidates, such as axions, can’t be tested by these experiments.)

It had been possible, however, to think dark matter might just have an unexplained affinity for sodium iodide. But the April 4 analysis changes that. “What they show in this paper nicely is that … you can exclude DAMA with itself—not with reference to other experiments,” said Laura Baudis, a physicist at the University of Zurich and a member of the collaboration that runs XENON1T.

Hard as it is to account for the DAMA signal using dark matter, it’s equally difficult to understand it any other way. For decades, experts have mulled over more mundane explanations. “Several have been put forward and rapidly dispelled,” said Juan Collar, a physicist at the University of Chicago who leads the CoGeNT dark matter experiment. “I personally cannot come up with a good explanation.”

Davis argued in Physical Review Letters in 2014 that the annual modulation comes from a combination of muons bombarding Earth most heavily in July and solar neutrinos peaking in January. But other physicists quickly showed that the latter seasonal effect is too small to produce the signal, at least in the way he had proposed. In a new paper that’s causing some buzz, Daniel McKinsey, a physicist at the University of California, Berkeley, contends that the signal could come from argon contamination. Certain isotopes of argon radioactively decay more or less depending on the season. Yet this explanation works only if the nitrogen DAMA uses in one step of their procedure contains argon, which is unknown.

Many researchers said that a lack of transparency by Bernabei and the DAMA team has slowed efforts to understand what’s going on. For example, one limitation of Freese and coauthors’ analysis is that DAMA hasn’t released information about whether background effects amplify or diminish at lower energies, leaving outside researchers to assume that these effects have been corrected for already.

Katherine Freese, The author of ‘The Cosmic Cocktail: Three Parts Dark Matter,’ sits on The High Line in New York City on July 18, 2014. Freese is the George E. Uhlenbeck Professor of Physics at the University of Michigan. She is one of the world’s leading researchers into the mystery of dark matter.
John Smock/Quanta Magazine

“I am certain that if they completely opened up to the community,” such as by sharing their data, “we would get to the bottom of what is causing the annual modulation,” Davis said. But the DAMA scientists present only their finalized data plots, argue strongly that their signal is evidence for dark matter, and take a “combative approach” to anyone who suggests otherwise, he said.

Other groups have had to step up. In the next few years, three new sodium iodide crystal experiments will start yielding results: ANAIS, COSINE-100 and SABRE, which has locations at Gran Sasso and at an underground lab in Australia. By replicating the experiment in the Southern Hemisphere, where summer and winter flip, SABRE will eliminate seasonal effects.

“For as long as physics remains an experimental science, the only way to advance knowledge will be through improved measurements,” Collar said. The complementary experiments either won’t see a modulation, in which case “we will have to turn the page and write the DAMA anomaly off,” he said. Or they’ll see something akin to it, in which case “we will have to work hard on a dark matter model that also explains all null observations with other detector materials.”

“Experience teaches that it will most likely not be dark matter,” said Neal Weiner, a theoretical physicist at New York University. “But I’m certainly persuaded enough that there’s a real chance it’s something interesting.”

Ultimately, said Freese, the new data release and her group’s analysis don’t change the big picture. “You still have to go build detectors made of the same material, but with different people doing it, and in different locations in the world … to figure out what the hell’s going on with DAMA,” she said. “Because nobody understands DAMA.”