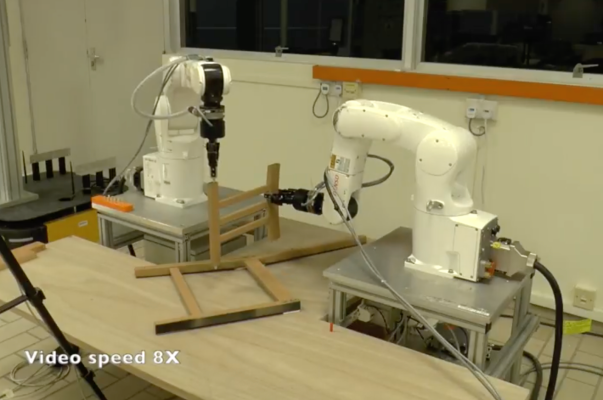 There are two kinds of people in the world: those who hate building IKEA furniture and madmen. Now, thanks to IkeaBot, the madmen can be replaced.

IkeaBot is a project built at Control Robotics Intelligence (CRI) group at NTU in Singapore. The team began by teaching robots to insert pins and manipulate IKEA parts, then, slowly, they began to figure out how to pit the robots against the furniture. The results, if you’ve ever fought with someone trying to put together a Billy, are heartening.

The assembly process from CRI is not quite that autonomous; “although all the steps were automatically planned and controlled, their sequence was hard-coded through a considerable engineering effort.” The researchers mention that they can “envision such a sequence being automatically determined from the assembly manual, through natural-language interaction with a human supervisor or, ultimately, from an image of the chair,” although we feel like they should have a chat with Ross Knepper, whose IkeaBot seemed to do just fine without any of that stuff.

In other words the robots are semi-autonomous but never get frustrated and can use basic heuristics to figure out next steps. The robots can now essentially assemble chairs in about 20 minutes, a feat that I doubt many of us can emulate. You can watch the finished dance here, in all its robotic glory.

The best part? Even robots get frustrated and fling parts around:

I, for one, welcome our IKEA chair manufacturing robotic overlords.