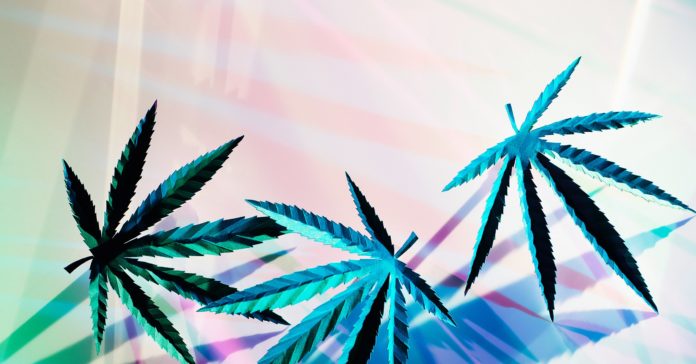 In a bright warehouse in the heart of Northern California’s cannabis country, a metal gate slowly peels up. “Also Sprach Zarathustra”—the iconic music from 2001: A Space Odyssey—blares as the room behind is revealed.

A mob of marijuana farmers and local politicians and activists and venture capitalists shuffle through into the Willy Wonka factory of weed. To the left, atop a hulking machine, two workers wearing white jackets and orange gloves drop flowers into cubbies, as workers below pile the product into jars. To the right, more workers at tables pack marijuana into joints, holding back shy grins as the mob ambles past.

Was the unveiling of Flow Kana’s new marijuana processing and distribution center a bit over the top? Yeah, sure. We were walking through the middle of the factory floor on a red carpet, after all. But hey, the cannabis industry is nothing if not playful.

Problem is, here in Northern California, it’s also under threat. The recent legalization of recreational use in the state may seem like a bonanza for marijuana farmers—and consumers, who also get the benefit of mandatory safety testing. But the situation is less peachy for small operators who want to follow the rules. They have to cope with a sprawling new bureaucracy governing the cultivation and distribution of marijuana. “Nobody becomes a farmer because they want to do paperwork, and the regulatory burden is massive,” says cannabis farmer Casey O’Neill.

Farmers used to take their product to a dispensary, which would process and sell the stuff however it liked. No longer. “I have to take it to the distributor, who tests it, taxes it, sends it along,” says O’Neill. “So the supply chain transition has been drastic, and that’s one of the things that we’re really trying to figure out.”

It’s why Flow Kana is turning this former winery into a cannabis supercenter. Here, technicians will test farmers’ crops for nasties like bacteria and pesticides, as mandated by law. It’s packaged and then shipped to dispensaries around California. The farmers barely have to do a thing after harvesting.

It’s centralization for an industry that historically been anything but centralized. And really, that history has made the cannabis in this so-called Emerald Triangle legendary. Thousands upon thousands of small farms have developed strains unique to their microclimates. Growers will tell you their product is a bit like wine: A prized varietal needs specific conditions to thrive.

But these farmers are in danger of losing their livelihood to consolidation. “As the cannabis industry is just coming out of prohibition and companies are beginning to get licensed, there are a lot of investment dollars going towards large indoor and greenhouse grow operations in the Central Valley of California,” says Michael Steinmetz, founder and CEO of Flow Kana.

“If we were starting this industry from scratch today, and there was no demand and no supply,” adds Steinmetz, “then yes, Big Ag would probably dominate it and run it.” But the reality is different. The Emerald Triangle marijuana ecosystem is established, and it is vibrant. Flow Kana’s quest is to save this cannabis culture with a facility that will take in product grown in the Emerald Triangle, helping growers compete with the supply chains of Big Cannabis.

It’ll also support the new regulatory climate. “As a producer of food, you need to track what processes it went through, where it came from, what farm, etc., and most of that’s for the purposes of recall and public safety,” says Pranav Sood, founder of Trellis, which makes software that manages the production and distribution of cannabis. “If you had tainted meat, you’d have to have a system in place to be able to track it back to where it came from and potentially do a fuller recall.”

Right now, the new testing requirements and taxes are running up costs. “It’s compounding all the way up, and at the end it gets passed down to the customer,” says Steinmetz. But if what’s happening in Colorado is any indication, the market will steady. When that state opened its legal recreational markets in 2014, prices were high, but have since plummeted to below what they were previously in the black market.

Tweaking the taxes on cannabis helped, “but I don’t think that’s the largest part of it,” says Adam Orens, founding partner of the Marijuana Policy Group, which studies the economics of cannabis. “It’s competition.”

California will inevitably adjust its own cannabis taxes as the market matures, but it’ll be choosiness that will really drive down prices for consumers. “You’ll see people who want a more artisanal experience and they will pay for that,” says Orens. “I think you’ll see this market end up looking like beer or wine.” If Big Cannabis ends up selling the Bud Lights or Coors of marijuana, maybe Flow Kana and its farmers can provide the craft brews.