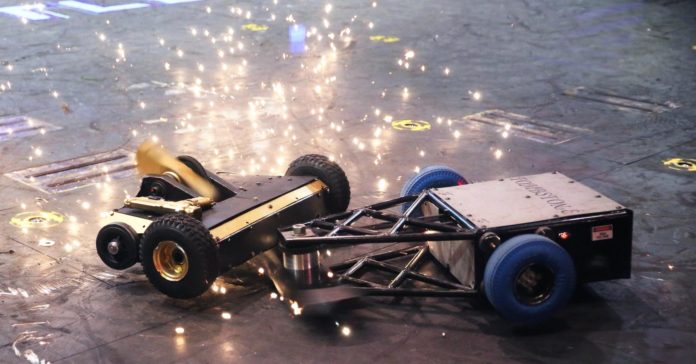 It’s hard not to like BattleBots. It is essentially a modern technology-based sporting event in which teams build remote controlled robot-like things that fight in an arena. Two robots enter, one robot leaves—and on May 11, the eighth season of the showdown begins.

Of course, there are many engineering aspects of these bots—but underlying every bit of technological terror is some very fundamental physics. Let’s go over some of the physics-based tactics used in the game.

How many of the robots have spinning-based weapons? It seems to be a popular choice. But why? Why spin at all? Suppose there is a robot with a horizontal spinning disk on the top (with little nubs to hit other robots). Example—see Captain Shrederator 2.

Why would you put a spinning disk on the robot? There is one simple answer: energy. Suppose you had something like a big robot arm that you could swing to hit other robots. That might be cool and stuff, but a spinning disk could do more damage. The key here has to do with time and energy. The energy stored in a spinning disk depends on its mass, size, and rotation speed. This means that the faster you spin that disk, the more energy it has. That gives the disk a tactical advantage over an arm in that you can keep increasing the speed to store more and more energy in the spinning weapon. A swinging arm, on the other hand, just has a set amount of energy to reach out and punch.

But wait! A spinning disk still has some disadvantages. First, it takes some time to get up to the best speed with the most energy. If it delivers a nice blow to another robot, it might slow down and need some “recharge” time to get back up to speed. There is another problem. If you hit a robot with a large force, that same force pushes back on the robot. That means that a spinning disk might indeed damage another bot with a well placed hit, but it’s hard to fling it across the arena since this force would just fling both robots apart.

Maybe you want to build a battle robot with a disk that spins vertically. That might be a good trick. There are two variations for vertical spinning robots. I will call them down-spin and up-spin. Maybe this diagram will help to explain the difference.

If you want an example of an up-spin battlebot, take a look at Minotaur vs. Blacksmith (actually, pay attention to Blacksmith also—that’s a good example of another weapon).

These vertical up-spinners have the same advantage as the horizontal spinners—they can take some time to increase the speed of the disk so that it has more energy. But the real trick with the up-spin is the force it exerts on both the victim robot and itself. Since the disk is spinning up on the side that hits its target, the disk has the ability to fling a robot up in the air. Of course forces come in pairs so this means that there is also a force on the up-spin bot. However, this equal force on the spinning bot is in the opposite direction—that’s down. In this collision, the victim is tossed and the attacker is pushed into the ground (which prevents it from flying away).

What about a down-spin bot? In this case, the spinning disk pushes down on the victim and up on the attacker. If you design your attacking robot correctly, you can account for this up-pushing force. But what good is a down-pushing force? It won’t throw the other robot, but you can tear into it with a spinning blade of death. Do robots even die? I’m not sure. You can see that all down-spin bots use the disk as some type of saw and not for flipping.

Oh, you need an example of a down-spin bot? There is Skorpios and Red Devil—both are down-spin.

What the heck is angular momentum? Here is a longer explanation—but for now I will just say that angular momentum is a property associated with rotating objects. If you want to change the axis along which an object rotates, you need to apply a torque (a twisting force).

A robot with a spinning disk also has angular momentum. You can really see this with vertical spinning bots. In order to turn the direction of the robot, you need extra torque so that you can change the axis of rotation for the spinning disk. This can lead to some weird cases where the robot actually tilts up on its side as it turns. Honestly, the physics of these tilt moves can be a little complicated. Maybe I will come back to this in a later post.

Take another look at the battle between Minotaur and Blacksmith. Yes, Blacksmith is a robot with a hammer. These seem to be popular—I suppose because hammers just look cool. Oh, they can also smash things. But how does a hammer compare to a vertical spinner? The one clear disadvantage is the energy. A swinging hammer can only gain energy during the swing (which is typically a short time). In order to increase the energy of the impact, a bot can increase the mass of the hammer to compensate for the lower speed during the swing (compared to a spinner).

But a large mass hammer introduces a new problem—momentum. Momentum is the product of an object’s mass and velocity and it doesn’t change unless there is an external force acting on this object. So if you consider a robot to have a body and a hammer, the total momentum should stay at zero as it sits on the floor. Once the hammer falls, the mass of the hammer head has a downward momentum. In order to make the total bot momentum zero, the rest of the robot (the body) has to have an upward momentum. You can see this with the Blacksmith (and other hammer bots). Swing down too hard and the robot will move up. It’s the price you pay for a heavy hammer.

I guess I should say something about the wedge. The idea is to make a slanted robot that can scoop up under other robots and flip them over. But really, what is there to say? It seems pretty straightforward. I guess the big advantage to wedge bots is that they are fairly simple (no swinging hammers or spinning disks).

Of course there is still even more physics behind these BattleBots—but this is just an introduction. Really, I could probably make an entire physics course that just focuses on BattleBots. Maybe I will have to do that in the future.