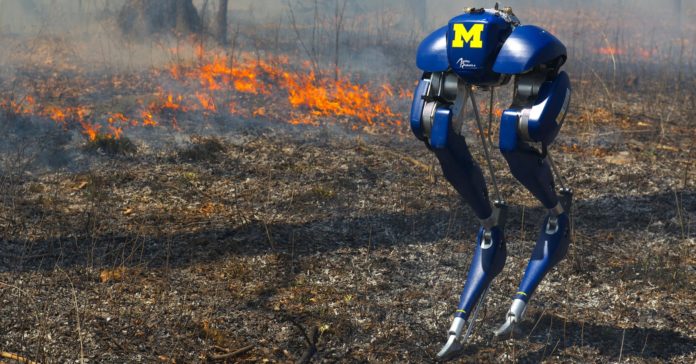 Benefits of robots: 1. They never get tired. 2. They can lift very heavy things. 3. They can walk through (controlled) conflagrations on college campuses.

At least, that is, the robots in and around roboticist Jessy Grizzle’s lab at the University of Michigan. Specifically, Grizzle is working with a remote-controlled biped called Cassie, a research platform that roboticists are using to master bipedal locomotion. So Grizzle isn’t just making Cassie walk through fire: He’s experimenting with other extreme use cases, like riding a Segway. Are those experiments a bit silly? Sure. But it’s also a great way to test robots in extreme situations and see what their limits are—and share that research openly. Because researchers can load Cassie with their very own walking-jogging-crouching code.

You might notice the Cassie still walks a bit gingerly. But Grizzle and his team are constantly tweaking the biped’s algorithms, then testing it all out in the real world … that’s sometimes on fire. It still struggles with larger obstructions like fallen tree limbs, but these are the kinds of challenges that are going to push the platform forward. Theoretically, you could outfit a Cassie—which would set you back a few hundred thousand dollars, by the way—to see straight through the smoke with lidar. It could see things no human firefighter could.

“I think it is an interesting demonstration of the ability to get robots out of the lab and into the real world, with a view toward robots that are able to perform useful tasks and get humans out of harm’s way,” writes Caltech’s Aaron Ames, one of a handful of roboticists who’s using the Cassie platform to study robotic bipedal locomotion. “We are still a long ways from autonomous firefighting robots, but the robots of today—and the dynamic walking control algorithms that have been developed recently—take an important step in this direction.”

Speaking of steps … why would it be useful to teach a walking robot how to not walk, as in the Segway experiments? Again, it’s about adapting a consistent platform to extreme applications. “We’re developing all the fundamental science and we publish it and we make all of our math available open source,” says Grizzle. “Others take our work, they’ve seen it proven in our videos, and then they’re confident when they implement it on their machine.” So if a researcher really wanted to send their robot on a cruise through a crowded tourist area, they’d know that it can ride a Segway just like you do: by holding an upright position to keep its center of gravity over the machine, then leaning forward or backward to accelerate or decelerate. Plus, unlike you, Cassie can’t freak out and overcompensate and end up on its butt.

Now, you’ve probably seen Boston Dynamics’ Atlas robot doing backflips and thought, Well, that there is as good as it gets. Why bother with Cassie? Well, Atlas doesn’t come without its downsides: Its hydraulic actuators are strong, yet necessarily bulky. Cassie, on the other hand, is a slimmer, electric design. So while Atlas might have the strength to, say, heft objects in a rescue situation, Cassie could more delicately move among humans in crowded cities. And it has the open research to start backing up lots of those kind of applications.

Bit by bit, researchers like Grizzle are getting Cassie to move faster, or better tackle uneven terrain, or climb steps. That will undoubtedly help build a world where bipeds move more confidently among us, whether that be walking through fire or, sadly, stealing our Segways.

Actually, go ahead and take the Segways. They’re all yours.