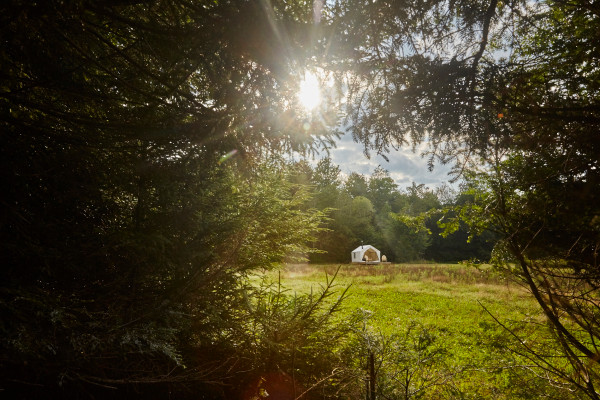 If you’ve ever gone camping and found yourself thinking it kind of sucks, likely because you’re too close to other campers, you might be interested to learn about Tentrr, a three-year-old, 47-person company that’s promising to make it “dirt simple” to enjoy the great outdoors. How: by striking deals with private landowners who are willing to host semi-permanent campsites on their property.

What do these look like? Picture elevated decks with Adirondack chairs, canvas expedition tents, wood picnic tables and sun showers, not to mention a fire pit, lanterns, dry food storage, cookware, a camping toilet and air mattresses that, courtesy of most hosts, will come with fresh linens.

Venture capitalists certainly appreciate the startup’s pitch. Tentrr — founded by one-time investment banker turned former NYSE managing director Michael D’Agostino — has raised $13 million to date, including a newly closed $8 million Series A round led by West, a San Francisco-based venture studio that both funds startups and helps them market their goods and services.

No doubt the investors are looking at the overall market, whose numbers are compelling. According to one trade association, the outdoor recreation industry represents an $887 billion opportunity, with Americans shelling out $24 billion annually on campsites alone.

Still, it’s easy to wonder how scalable the company will be. Tentrr had 100 campsites up and running in the Northeastern U.S. as of the end of last year. D’Agostino expects it will have 1,000 sites by year-end, including on the West Coast, where it will begin installing camps this summer. But this assumes that Tentrr can convince enough families with sufficiently large properties that partnering with the company is worthwhile.

D’Agostino says its landowner partners need to have 15 acres at least and that the average property on the platform currently is much larger than that. He also says these property owners keep 80 percent of whatever they decide to charge campers to stay on their grounds.

For what it’s worth, Tentrr doesn’t seem to have much in the way of direct competition if you exclude state campgrounds. Venture-backed Hipcamp, for example, which raised a small amount of seed funding back in 2014, partners with private landowners to help arrange camping experiences, but it mostly acts as a search engine. A growing number of RV-focused startups have also sprung up, including Outdoorsy. But their customers are largely looking for adventure on the road, not in a secluded field.

There’s always industry giant Airbnb to worry about. But Airbnb, whose offerings include campsites, emphasizes unique experiences. Tentrr is largely about standardizing its process in order to leave fewer questions — and less doubt — about what to expect. (D’Agostino says that roughly 40 percent of Tentrr customers are first-time campers.)

We know that if the service makes it way to California, we’re likely to try it, having suffered through some fairly crummy camping experiences. If you’re also interested in learning more, you might check out our conversation with D’Agostino, edited for length. We chatted yesterday.

TC: You were a banker, then you traveled around the country and world, trying to convince companies that they should list on the NYSE instead of Nasdaq. How did this company come to pass?

MD: When I was a little kid, we’d sometimes stay at a family friend’s farm in Litchfield, Connecticut. I assumed that every kid had a Litchfield farm where they could camp, which isn’t the case obviously. Meanwhile, working 100 hours a week as an investment banker, it just became harder and harder to get out of the city and have great experiences.

The legacy campground industry hasn’t changed since the Civil War. It’s run by the government — which I’m happy to compete with all day long. And these are just terrible businesspeople. We want to wipe away this infrastructure by distributing it among rural landowners.

TC: So you’re building these semi-permanent camping sites. How standardized is the pricing?

MD: Pricing is variable and set by the landowner who keeps 80 percent of that fee. We keep 20 percent; we also charge a 15 percent fee on top of that nightly rate. Right now, the average price per night is $140, but we’re introducing more features for [hosts], including minimum-night stays, and [surge] pricing if they have demand for a bunch of bookings at the same time.

They can also offer extra amenities and experiences that will allow you to have a personalized experience. For example, landowners, or “camp keepers” as we call them, can offer extra bundles of wood or luxury bedding or horseback riding or skeet shooting. It’s really only limited by the imagination. We’ll also soon allow third parties to provide curated activities so that when you log on to our app, you can book a whitewater rafting trip or reservations at the best farm-to-table restaurant nearby.

TC: What happens if something goes wrong? Who insures what?

MD: Every campsite is covered by a $2 million commercial insurance policy. It’s a benefit not just in terms of liability but in making people feel more comfortable during these stays — both the hosts and guests.

TC: Where are you building these sites, exactly, and how long do you estimate that they will last?

MD: We build them ourselves, right now in places from southern Maine to eastern Pennsylvania.

We get our tents from a family company in Colorado that’s been around for 90 years and that still receives requests to repair tents they’d built 30 years ago [meaning they’re durable]. We also use pressure-treated lumber and marine-grade plywood, so we expect they’ll last for 10 to 20 years.

TC: You’re having to convince people to let strangers onto their properties, sprawling as they may be. What does that sales process look like?

MD: It used to look like me putting 45,000 miles on my Jeep Cherokee and explaining to families why they should have a Tentrr campsite in their hayfields. [Laughs.] Today, direct mail campaigns work beautifully. [Hosts] are also hearing about us from other [hosts] and we make it easier for them to [apply] to join the platform. You click on a link that says “List my property” and you’re walked through a 20-point checklist, including about accessibility and how secluded a property is. Using that feedback, we know with 90 percent accuracy whether or not a property is appropriate. If we think it is, we’ll send out a scout.

TC: Are there sometimes more than one campsite on a property?

TC: What does the clean-up process involve?

MD: It’s relatively maintenance free. There’s no maid service. No keys. No worries about someone stealing silverware. Homeowners have to make sure there are no beer cans left behind, but we place a high priority on land stewardship and emphasize a leave-no-trace approach when it comes to our guests.