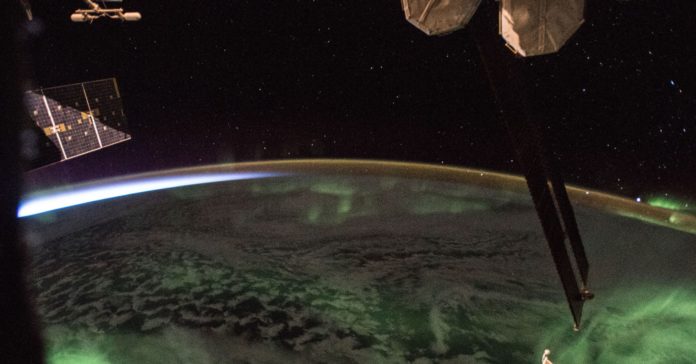 Fasten your five-point harnesses because today we’re going on a trip. We’ll start at our home planet (ok, just above it), where astronauts aboard the International Space Station have captured some unusual photographs. As they swoop overheard at almost 18,000 miles per hour, they normally keep busy doing science experiments and research. But they do get to witness a sunrise and sunset every hour and a half and when those intersect with special events like auroras over the north and south poles, they’re ready with their cameras.

Next we’re zipping to Mars to check out a crater that could have one of two origin stories. Mars used to have a lot of volcanic activity and evidence of these times remains as pockmarks around the surface of the planet. This crater, called Ismenia Patera might be an ex-volcano, though some suspect it could be a scar from a major meteorite impact.

Take a bathroom break, because next we’re heading to Jupiter to rendezvous with the Juno spacecraft. On April 1, Juno was performing its twelfth orbit of the gas giant and it took some spectacular photos. The spacecraft orbits the planet every 53 days and each time not only sends back pretty photos, but invaluable science as well. We are slowly learning more about Jupiter’s interior, as well as what might be fueling its lovely swirling storms.

Not ready to head back to Earth? Check out the full collection of space photos here.

GizmoCrazed - July 6, 2011 2
Twitter is experimenting with a Facebook-Like message wall to its users' profile pages, that will allow twitter users to send "@ replies or mentions"...

Samsung Teases With A Glimpse Of 3D Flexible AMOLED Screens