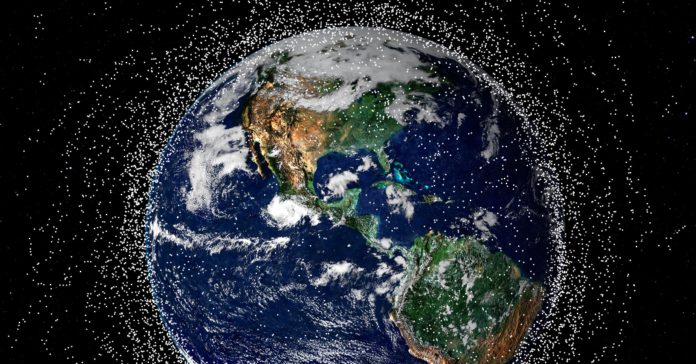 There is a lot of junk floating out in space, and it’s a problem we’ve been talking about, in fits and spurts, since the 1960s.

Space junk was the topic of my middle school futurists’ society challenge. That year, three friends and I mapped the probable timeline and implications of all the broken bits of dead spacecraft and orbital clutter, writing scenarios about how all that garbage would eventually make it difficult to launch new satellites. Our solution: an enormous net, connected to an Earth-based, rocket-powered launching and landing system.

Space junk was the debate topic my senior year of high school, and my teammates spent the year mapping out arguments for all the ways errant satellites could cause space agency turmoil, political unrest, and human casualties. As a sophomore in college, it was part of my environmental politics class. I wrote a thesis on it. A decade later, when I was living in Japan, a Chinese satellite collided with a NASA rocket. The news, and the junk, seemed to be everywhere, following me throughout life.

Space junk rises to the level of our national consciousness only when something—an inactive satellite, busted-up rocket boosters, fragments of manned spacecraft—threatens us back on Earth. We’re talking about it again because, after nearly seven years orbiting Earth, the Chinese space station Tiangong-1 tumbled out of its celestial track earlier this month, plunging to earth and scattering debris over hundreds of miles in the South Pacific Ocean.

Space junk is a problem that continues to orbit our collective attention, and within days it will once again circle out of view. We’ll ignore the problem to our own detriment. The Federal Aviation Administration is projecting “an unprecedented number” of satellite launches between 2018 and 2020, with some estimates as high as 12,000 during that time period.

Just as Tiangong-1 was falling towards Earth, halfway around the world in a D.C. office building, the Federal Communications Commission gave SpaceX provisional approval to launch some 4,000 new satellites into orbit—without any scenarios for how to deal with all that future space junk they would inevitably become.

As humans, we operate with a “nowest” mindset—we tend to plan for the next few years of our lives more than any other timeframe. Nowist thinking champions technological achievements, but it also creates a serious blind spot: We forget that our actions in the present could have serious consequences in the future.

Already on Earth, we discard tens of millions of tons of electronics each year. We curdle lakes with toxic chemicals, contaminate the atmosphere with climate-altering carbon dioxide, and heave so much plastic into the oceans that by 2050 experts think there will be more plastic than fish in the sea.

Space is our next dumping ground. As many as 170 million fragments of metal and astro debris necklace Earth. That includes 20,000 pieces larger than a softball, and 500,000 about the size of a marble, according to NASA. Old satellites, like Tiangong-1, are the biggest and highest-profile lumps of rubbish, but most of it comes from rocket parts and even lost astronaut tools. Size doesn’t always matter—a fleck of paint, orbiting at a high velocity, cracked the Space Shuttle’s windshield.

This debris will pose a navigation hazard for many centuries to come. At least 200 objects roar back into the atmosphere each year, including pieces of solar panels and antennas and fragments of metal. All of them pose dangers for future astronauts: One plum-sized piece of gnarled space trash traveling faster than a speeding bullet could rip a five-foot hole into a spacecraft. And that collision, then, would hatch its own spectacle of shrapnel, which would join the rushing river of junk already circling the planet.

It’s not just Americans doing the dumping. China and Russia each have dozens of decommissioned satellites overhead, though the US certainly does it with style. Like everyone, I marveled at the successful launch of SpaceX’s Falcon Heavy rocket, whose cargo included Elon Musk’s Tesla Roaster and a mannequin driver named Starman. I’ll admit, I teared up listening to David Bowie as the rockets separated from the payload. It was an incredible technological achievement, one proving that the system could someday transport people and goods—perhaps real cars, and real people—into space.

Now that Tesla and its driver are overhead, in America’s junkyard in the sky. To be sure, space is big. Really big. Most debris soars about 1,250 miles above the Earth’s surface, so you have better odds scoring a seat on Virgin Galactic’s maiden voyage than witnessing Starman crash into your next door neighbor’s house. But it’s our behavior back here on Earth—our insistence on sending things up, without really thinking how to safely contain or send them back down—that should concern you.

We weren’t always so short-sighted. Ancient Native Americans lived by the Seventh Generation Principal, a way of long-term thinking that considered how every decision would affect their descendants seven generations into the future. In Japan, Buddhist monks devoted part of their daily rituals and work to ensuring the longevity of their communities, even planting and tending to bamboo forests, which would eventually be harvested, treated and used to repair temple roofs many decades hence. With each new generation, we live life faster than our ancestors. As a result, we spend less time thinking about the farther future of humanity.

We now have our sights set on colonizing Mars, mining asteroids for research and commerce, and venturing out to the furthest reaches of our galaxy. Space is no longer the final frontier; we’re already exploring it. Our current approach is about getting there, rather than considering what “getting there” could mean for future generations of humans, not to mention other life in the universe.

Where all that junk winds up isn’t something we can predict accurately. We could be unintentionally wreaking havoc on civilizations far away from Earth, catalyzing future intergalactic wars. Or, we might cause far less scintillating problems. Space junk could start to behave in unpredictable ways, reflecting sunlight the wrong direction, or changing our atmosphere, or impacting the universe in ways that don’t fit into our current understanding of physics.

Last week—30 years after my friends and I created an imaginary net to capture space debris—SpaceX launched RemoveDEBRIS, its own prototype, an experimental net to collect junk in orbit. It’s a neat idea, but even as middle schoolers, we knew it was an impractical one. Individual nets can’t possibly scale to address the hundreds of millions of particles of debris already in orbit.

The challenge is that all of our space agencies are inextricably tied to national governments and militaries. Seeking a global agreement on how to mitigate debris would involve each country divulging exactly what it was launching and when—an unlikely scenario. The private sector could collaborate to build grand-scale orbital cleaners, but their commercial interests are driven by immediate launches. Given all the planned launches in our near future, we don’t have much time to wait. We must learn to be better stewards of our own planet—and commit to very long-term thinking—before we try to colonize any others.