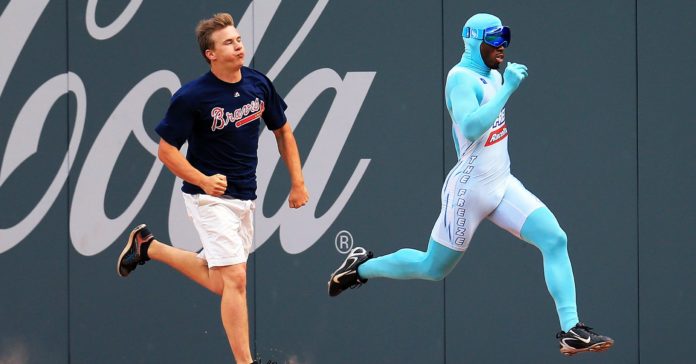 The only thing I know about the Freeze is that no one can beat the Freeze (except with a generous head start). And he’s awesome. In case you haven’t seen, the Freeze is this guy in a turquoise spandex suit that challenges mere mortals to a race in the outfield of the Atlanta Braves SunTrust Park between innings.

If I want a physics problem, the first thing I am going to need is data. I want the position of both “the Dude” and the Freeze. Since they aren’t really running in a straight line, it’s not super trivial to get their position as a function of time. Instead, I am going to pick certain identifiable points along their path and record their times at those points. I can estimate the distance between points on the field using the dimensions of SunTrust Park.

The second part is to look at the video of the Freeze and the Dude to record the time that they pass these marks. Of course I will use Tracker Video Analysis—even though I’m just marking a few points this software makes it easy to keep track of the times (instead of counting video frames).

But after that, I get the following plot for the motion of the two runners.

Here you can see that both the Freeze and the Dude seem to run at a fairly constant speed (I’m partially surprised). By fitting a linear function to each set of data, I can get the speeds for both runners. It seems the Freeze is going at around 8.24 m/s and the Dude is at 6.24 m/s. Both of those are fairly fast—I don’t think they pick out average people to race the Freeze. You can also see that the Freeze gives the dude an almost 5 second head start (although the whole race was only about 25 seconds long) with the two runners meeting with only 3 seconds left.

Since there are too many unanswered questions, I am just going to use this data for the following homework questions. Yes, you have to answer them all. For all of these questions, assume the Freeze can run with a speed of 8.24 m/s.