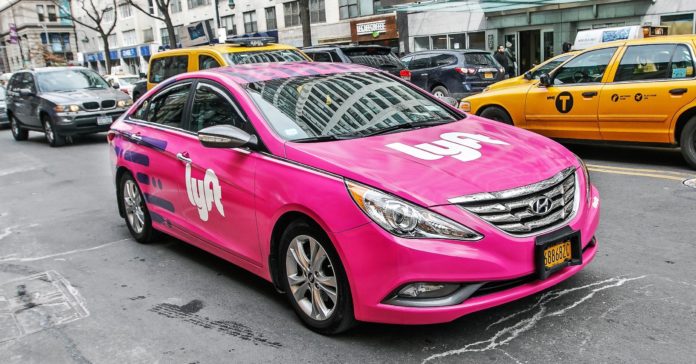 Over the years, John Zimmer, the co-founder and president of Lyft, has often pointed to a class he took as an undergraduate as the source of his ideas about environmental sustainability—and by extension, Lyft’s goals to create greener transportation options.

The class at Cornell University was called “Green Cities.” The professor, Robert Young, opened the first lecture by describing how roads and transit systems built decades ago weren’t designed to sustain the rapid growth of urban populations today, Zimmer recalled. “If we don’t fix the infrastructure problem, we’re going to have a major economic and environmental problem,” Zimmer told a roundtable of reporters in Washington, DC, in late March.

Founded in 2012, Lyft is now an $11 billion ride-hailing company, second in the industry to Uber alone. Its concept of ride-hailing has long been founded on reducing the need for personal car ownership. But today, the company made perhaps its most meaningful move yet towards reducing carbon emissions: Lyft is promising to offset the carbon emissions of every ride around the world, making all rides “carbon neutral.” From now on, Zimmer and his co-founder Logan Green wrote in a Medium post, “your decision to ride with Lyft will support the fight against climate change.”

According to the post, Lyft’s total annual investment will amount to over a million metric tons of carbon, “equivalent to planting tens of millions of trees or taking hundreds of thousands of cars off the road,” which will make Lyft one of the largest voluntary purchasers of carbon offsets in the world. Scott Coriell, a Lyft communications officer, said the company does not have a specific estimate for the cost of the investment, but that it will be in the millions of dollars. According to a 2015 report by the NGO Ecosystem Marketplace, General Motors, Barclays bank, and PG&E were the top three voluntary buyers of offsets between 2012 and 2013, respectively scooping up 4.6 million, 2.1 million, and 1.4 million carbon offsets, which are measured in metric tons, during that period.

Carbon offsets have been the subject of some scrutiny and scandal; some companies that take money promising to plant trees and capture emissions have been exposed as worthless or scams. Coriell noted that Lyft will become carbon neutral by investing in offset projects that would not have happened without their backing. These projects will all be US-based and close to Lyft’s largest markets, Corriel said, and will include investments in a manufacturing emissions reductions project in Michigan, oil recycling in Ohio, and a wind energy farm in Oklahoma. These projects are verified under the American Carbon Registry, Climate Action Reserve, or Verified Carbon Standard—all rigorous third-party standard setters of legitimacy.

The announcement is not Lyft’s first gesture towards environmental sustainability. In 2017, it signed “We Are Still In,” joining hundreds of states, cities, and corporations (including Uber) in pledging to uphold the US carbon emissions reduction goals set forth by the Paris climate accord, after President Donald Trump announced plans to withdraw the country’s commitment. At the time, Lyft also outlined plans to make the majority of its fleet autonomous and electric by 2025. “Bringing more electric vehicles onto the platform in the future will help us reduce the needs for offsets,” Coriell wrote.

As part of its own efforts to reduce car ownership, Uber has recently pivoted to become a multi-modal mobility provider, building car- and bike-sharing services into its app. It has not announced any plans to offset its carbon emissions. An Uber representative declined to comment on Lyft’s announcement.

Lyft’s commitment to carbon-neutrality is especially meaningful, because one irony of the ride-hailing industry is that, so far, it’s likely creating more vehicle miles traveled, not less. Though some studies have suggested that ride-hailing users are more likely to give up personal car ownership, more and more research shows that the convenience and relatively low cost of on-demand rides are leading travelers to take trips and generate pollution that they wouldn’t have otherwise. (Plus, all of those deadheading drivers.) As these services lure passengers off of public transit systems, it has become hard to argue that there’s anything particularly environmentally friendly about hailing an Uber or Lyft. This announcement changes that.

Lyft is hardly a perfect citizen, planet-saving-wise. Alongside Uber, it lobbies state legislators to preempt local regulations, which may limit the ability of cities from organizing road space in the most environmentally efficient way possible. And from a sustainability perspective, it would probably be better for Lyft to go carbon-neutral and invest in bike-sharing, as Uber is doing. Even renewably powered electric cars have a sizeable carbon footprint. If customers take a Lyft instead of walking or biking because they think these options are all equally green, they’re wrong.

Still, over the past year, Lyft has made genuine efforts to grow into its image as the “woke” alternative to scandal-ridden Uber, to borrow Zimmer’s term. Donations to the ACLU and free rides to anti-gun rallies have bought it credibility among progressives. Going carbon neutral is probably its most significant step in that direction: It is a lasting delivery of one of the company’s most fundamental promises. That really matters, especially as car manufacturers dial back their Obama-era eco-friendly branding efforts and push to weaken environmental regulations. Lyft seems to have real faith in the notion that there’s a market value in socially conscious transportation—that riders will choose Lyft over other apps, or their own vehicles, because they know it’s a better choice.

“We’re aggressively pursuing a set of values because one, we think it’s the right thing to do and two, it’s good for business,” Zimmer said last month. “That’s what we’re out to prove.”

These stoner hackers want machine learning to save us from sick...