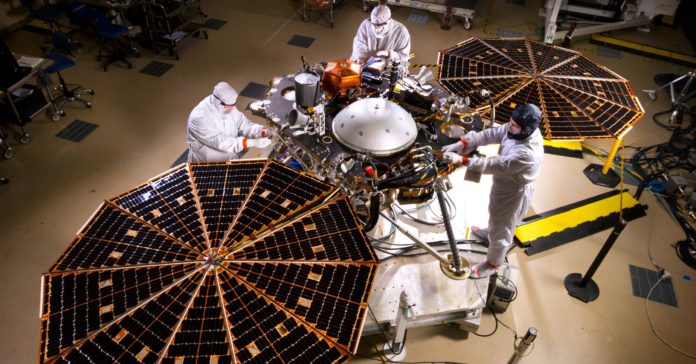 A few rules for the cleanroom where NASA’s new InSight Mars lander waits for launch. One, if you must sneeze, sneeze away from the spacecraft. Two, if you drop anything, let one of NASA’s escorts pick it up for you. Three, do not under any circumstances cross the black-and-yellow-striped tape and touch the spacecraft.

Oh also—an engineer tells a dozen media in a conference room at Vandenberg Air Force Base—do not lick the spacecraft. There’s always that one rebel, I suppose.

The InSight lander at rest in a cleanroom.

The reasons to behave ourselves are many, and they are serious. For one, InSight costs nearly a billion dollars, and although it’s engineered to survive the punishing journey to Mars, it’s not engineered to be licked. And two, this conference room is loaded with planetary protection specialists, whose oh-no-big-deal job is to make sure Earthling microbes don’t end up colonizing Mars. And not just for the solar system’s sake—NASA is obligated by international treaty to keep other planets clean. In just a month, it’ll fire InSight to the Red Planet, where the lander will drill to unravel the geological mysteries of our solar system’s rocky bodies.

On Friday NASA shuffled us media into a pair of rooms designed to keep bugs the hell away from InSight. In the first, we step all over a sticky white rectangle, a kind of fly paper for particulates. Then we don those blue fabric booties you’d find in a hospital.

In the next room over, on goes the face mask, and over that a hood. A friendly yet stern specialist demonstrates how to step into coveralls without making any of the material touch the ground, or falling over and having to start all over again. Then I sit on a bench, feet on one side of a line of tape, and slide on shoes with high socks that cinch tight over my calfs. Only now can I swing my feet over to the other side of the tape—the clean zone.

The specialist ushers me through a glass door into a tiny closet dotted with vents, which blast my body as I spin 360 degrees with arms up. After a few seconds, I push through another door and into the planetary science version of heaven.

It’s shiny, almost entirely white, and cavernous. There sits InSight in two pieces—the spacecraft itself and the heat shield that’ll protect it from the 2,800-degree-Fahrenheit temperatures as it descends through the red planet’s atmosphere. Around it stand engineers in all white (media get conspicuous dark blue), hands clasped in front of them. I can see nothing but their eyes, but they’re friendly eyes. Eyes that say, What would you like to talk about at a safe distance from the spacecraft?

Two of those eyes belong to Ryan Hendrickson, a planetary protection engineer at NASA’s Jet Propulsion Laboratory. Hendrickson’s greatest foe: bacterial spores. “They’re usually the ones that are resistant to UV radiation or they’re resistant to certain cleaning products,” he mumbles through his face mask. “So when we build a spacecraft in a cleanroom, we’re kind of artificially selecting for those bacteria to hang around. That’s why we specifically target those organisms to measure.” If they’re hard to find on InSight, chances are other less-hardy microorganisms like fungi haven’t been able to take hold either.

Fun fact: When a waiter scrubs your table with circular swirls of a wet cloth, they’re really just spreading bacteria around. With InSight, NASA instead periodically tests for bacteria and gives the thing good linear wipes up and down, physically removing spores from the surface.

And they’re damn good at it. This particular mission is Category IVa. “So it’s limited to 300,000 spores on the entire spacecraft,” says Hendrickson. “If you piled those all into one place, they would probably fit on a hangnail.” For some perspective, just one square inch of your hand is home to around 10,000 bacteria. With its extended solar panels—which will power the spacecraft as it does science and communicates with Earth—InSight is 20 feet long.

A rendering showing the lander’s domed seismometer and its drill, which will probe down 16 feet to take the planet’s temperature.

When InSight settles on the Martian surface, it’ll deploy two primary instruments. The first is a seismometer wrapped in a dome that insulates and protects from the planet’s dust storms. This will measure marsquakes—don’t you dare call them earthquakes. Like scientists can do here on Earth, with InSight planetary geologists will be able to infer the composition of Mars’ innards from these vibrations.

The second instrument is the fanciest thermometer you ever did see, which will drill down 16 feet, deeper than any other Mars craft has probed. It will trail a cable embedded with thermal sensors every foot and a half. “We can actually figure out what the increase in temperature is as you go down this hole,” says Bruce Banerdt, principal investigator of the mission. “That thermal gradient is what is pushing the heat out of the planet. So even over that short interval, we can extrapolate that and get the temperature deep into the planet.”

The bad news about Mars is that scientists don’t really know how much heat is left over from the formation of the planet. But the good news is that Mars is nowhere near as geologically active as Earth, with its plate tectonics and volcanism and many earthquakes. So how does a rocky planet end up like Earth, or how does it end up relatively calm like Mars?

“On Earth, we can’t really study that very well because the crust has been recycled by plate tectonics, the mantle has been churned up by vigorous convection,” says Banerdt.

That’s erased a lot of the evidence for the early processes in the formation of a planet, yet Mars may have retained a lot of those fingerprints. So InSight will be measuring things like the thickness of the planet’s crust and the size of its core. “We can use that to understand those processes that happen early on in the history of Mars and then extrapolate that to all the other rocky planets,” says Banerdt.

First, though, NASA has to erase InSight’s biological history, (potential) licks and all.

-Drill-happy landers are pivotal to understanding the geology of Mars. But that doesn’t mean orbiters can’t also sniff out things like fresh water on the Red Planet.

-Sit back and take in a stunning stitched-together video of Mars.

GizmoCrazed - January 23, 2014 0
It’s not unusual for people to start a debate on what the next iPhone would look like almost immediately after one’s release. The design,...

I might be able to finally replace my MacBook with an...