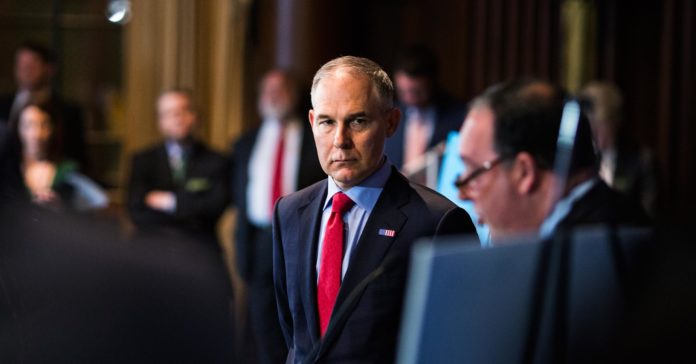 EPA administrator Scott Pruitt heads to Capitol Hill Thursday for two separate hearings, ostensibly to answer questions about his agency’s budget. But House lawmakers—both Republican and Democrat—will instead focus on a series of scandals that have turned the agency upside down. From his paranoia about personal security and that $43,000 soundproof telephone booth to sweetheart lodging deals with lobbyists and big pay raises for young aides, Pruitt will be answering some skeptical House members.

At last count, Pruitt faces 10 investigations by the Government Accountability Office, Office of Inspector General, and congressional committees. And while the administrator defends himself against allegations of misconduct and ethics missteps, environmental advocates and some EPA employees are focused on what federal environmental and climate policies could look like in a possible post-Pruitt era.

“It would be great for morale if he were to get the axe,” says an EPA employee who asked not to use his name for fear of losing his job. “That said, we don’t really know him. He’s a shadowy figure, a kind of boogieman.” The employee, a life scientist in an EPA regional office, said he and his colleagues don’t receive much information from EPA headquarters about Pruitt’s policies, agenda, or even his visits. Employees there get most of their information about Pruitt’s agenda from TV news. “[Pruitt] was here last week, but nobody told us,” the scientist said.

Pruitt’s presence was strongly felt this week, though, when he proposed a new rule that would change how the EPA uses science to protect public health. The rule would restrict the EPA from using scientific studies whose data are not made publicly available online “in a manner that is sufficient for independent analysis and substantial reproduction of research results.” This language was initially part of legislation sponsored by Rep. Lamar Smith, a Texas Republican who pushed his “Secret Science Reform Act” while serving as chairman of the House Science Committee. It never passed.

Smith, and now Pruitt, argued that the EPA rule would increase transparency. But scientists say it would burden researchers and lead the best science to be ignored. Under the rule, epidemiological studies linking air pollution to early death, or contaminated drinking water to cancer, for example, could be tossed out because they relied on confidential medical records of people who were in the study.

“If you don’t publish the data, you only publish the conclusions … that’s simply wrongheaded,” Pruitt said Tuesday.

This kind of transparency has been sought by polluting industries who have fought EPA regulations in court in the past. But scientists are pushing back against Pruitt’s proposed rule, which now will undergo a 30-day comment period.

“The [EPA] administrator’s latest attempt to reject valid scientific evidence fundamentally mischaracterizes the way science is conducted and made available for decision-making,” said Rush Holt, chief executive officer of the American Association for the Advancement of Science, in a statement. “If put into practice, EPA could prohibit, or make it incredibly costly, for the agency to use a wide swath of high-quality scientific research.”

Which is in keeping with Pruitt’s agenda. Pruitt has upheld the Trump administration’s promise to overturn existing environmental regulations and promote closer ties with industries the EPA regulates. One of Pruitt’s goals is to cut federal funding for EPA’s Science and Technology account by 36 percent to $449 million. Congress held the account flat at $724 million in final appropriations for fiscal year 2018, despite the Trump administration’s request for similarly deep cuts last year.

Pruitt’s fate ultimately rests with President Trump, who has tweeted previously that he supports Pruitt’s deregulation efforts. But if allegations of Pruitt’s unethical conduct lead to his dismissal, it’s unlikely that those policies write large would change. “We have to remember that the root of the problem here is the president’s determination to dismantle the EPA,” says Jeremy Symons, vice president for political affairs at the Environmental Defense Fund. “Whoever he puts in charge is going to be pursuing that agenda.”

In Pruitt’s absence, the number two at EPA is Andrew Wheeler, a coal industry lobbyist who was just confirmed to his post earlier this month. In addition to representing coal and energy firms, Wheeler was also a campaign advisor on environmental issues to Marco Rubio, and staffer to Sen. Inhofe, a longtime denier of climate change and the science behind it.

Still, environmental advocacy groups say Wheeler would be a step up. “How could it be worse than Pruitt?” says Eric Schaeffer, executive director of the Environmental Integrity Project, an advocacy group that has been suing the EPA for information about Pruitt’s expenses, travel, and private meetings with industry representatives to discuss government regulations.

“It doesn’t means the sun will come out and people will be singing, it will still be gloomy,” says Schaeffer, who was EPA chief of enforcement in the Clinton administration. Schaeffer says Pruitt’s departure could give a lift to EPA employees, and the environmental movement in general.

“But what it will do is feel like a victory that this is a bad guy who got run out of town. That will make them readier for the next fight. You take your victories as they come. If he’s knocked out, we’ll feel like we got a round now.”

Betsy Southerland worked at the EPA for 33 years until resigning in August 2017, she says, because of Pruitt’s determination to remove regulations that protect public health and the environment. “I don’t think there is any way that a new administrator will not continue to pursue the repeal of health and safety rules,” says Southerland, the former director of science and technology in the EPA’s Office of Water. “That won’t stop, but I hope at least the fleecing of the American taxpayer will stop.”

Two current EPA employees who spoke to WIRED say they might watch the webcast of Pruitt’s congressional testimony, but probably on their personal smartphone rather than their work computer. The EPA administrator is scheduled to appear before the House Energy and Commerce Committee at 10 a.m., followed by the House Appropriations Committee at 2 p.m.

GizmoCrazed - May 16, 2019 0
(Credit: Monkey Business Images/Shutterstock) Don’t get a big head, your mother may have told you. That’s good advice, but it comes too late for most...

Scientists Discover A Protein That Seems to Fight Aging In Our...

Top 10 Magazines Of The World