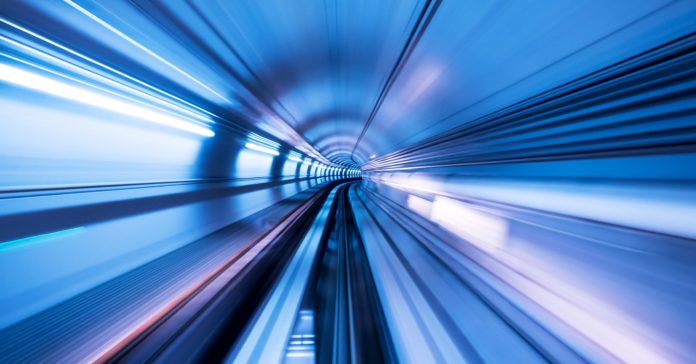 Is Elon Musk crazy or just awesome? This week, the serial CEO (Tesla, SpaceX, Neuralink) posted on Twitter about yet another one of his ventures, the super fast tube-based transportation system called hyperloop.

This means the hyperloop vehicle has to get up to a speed of 170 m/s and then back to 0 m/s in just 1.2 km, or about three quarters of a mile. If the acceleration for increasing speed has the same magnitude during the slow down phase, then it would reach its maximum speed right in the middle—after 0.6 km.

In order to calculate the required acceleration, let me start with the definition of acceleration in one dimension. It’s basically a measure of how fast the velocity changes. I can write that as:

Is that a reasonable acceleration? Well, it’s a little bit on the high side. Just consider this: If you took a bowling ball and dropped it off a building, it would accelerate downward with a value of 9.8 m/s2. This value is an important reference (also because of the way you feel on the surface of the Earth). We call this acceleration 1 “g”. That means the hyperloop would accelerate at 2.4 g’s.

If you accelerated in your car as fast as possible, you would be lucky to get an acceleration of 1 g. Or if you took your vintage Space Shuttle for a launch, you might get 3 g’s or even higher, but not for very long.

So, if I had to guess, then this hyperloop test is just that—a test. Although a human can withstand 2.4 g’s, there is no way a human could be expected to withstand that kind of acceleration while still playing on a smart phone or drinking a cocktail and eating peanuts.