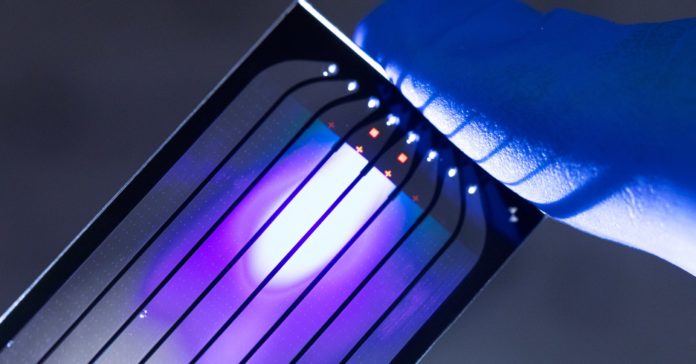 During a recent Uber ride, Madhuri Hegde’s driver asked her what she did for a living. The chief scientific officer for laboratory services at PerkinElmer, she prepared to bore him with a description of the tests her company had developed—most recently to flag serious genetic disorders. Instead, he was intrigued. “Where can I get one of those?” he asked.

For years, PerkinElmer has only offered that clinical test to doctors. It screens for all 59 genes that researchers are sure play a role in one of 34 conditions you can treat if you catch it early enough. Genes like PKP2, mutations in which can increase the risk of arrhythmogenic right ventricular cardiomyopathy, a leading cause of sudden heart failure in young people. Or ATP7B, which can point to Wilson disease, where copper accumulates dangerously in the liver. Usually physicians only prescribe the test when they think their patients might be at risk for one of those conditions. But soon, anyone curious about their health—Hegde’s Uber driver included—will be able to request it.

PerkinElmer announced Tuesday it will start selling its test this summer through the consumer genomics marketplace Helix, a spin-out of sequencing giant Illumina. Helix launched its platform last July, with 18 products meant to inspire customers to embark on a journey of discovery through DNA. Some boasted dubious science; some were just silly. Only one of them had a hardcore health bent—a test to see if hopeful parents carried any disruptive genes they could pass on to their kids.

Since then, though, Helix has built a number of partnerships to offer more medically relevant insights, PerkinElmer being one. Helix says it’s just responding to demand; patients are into democratizing access to clinical tests. But as more people turn to their DNA to make decisions about their health, medical professionals who help make those decisions wisely worry about their ability to keep up.

“You may think DNA is DNA regardless of what you’re looking for, but context really matters here,” says Ana Morales, a certified genetic counselor at the Ohio State University Medical Center and president-elect of the American Board of Genetic Counseling. Normally, a doctor would order a test like PerkinElmer’s when a patient starts presenting symptoms, like an abnormal heart rhythm. Maybe they even have a brother or sister with similar complaints. Algorithms and experts would then comb through the patient’s DNA looking for places in their genome where specific mutations—called variants—might appear. All mutations aren’t created equal; they’re only looking for ones that geneticists have validated as playing a role in certain diseases. How big a role changes from variant to variant, and from patient to patient. Without symptoms, matching becomes a guessing game.

“We’re now moving away from interpreting a variant in someone who has a disease to someone who doesn’t,” says Morales. “That is possible, but the level of expertise required to do that is limited to within a few experts in the genetic community. There’s only a very select group of people in the US right now who would feel comfortable doing that on a routine basis.”

That’s one reason a doctor might not tell all their patients about the availability of tests like this one. The other is cost. Sequencing plus analysis can run into the thousands of dollars, which insurers won’t reimburse if the test-taker is healthy. Right now insurance companies are only required to cover such screens under certain criteria—like if a woman has a family history of breast cancer. Responsible physicians are reluctant to put their patients or their institutions on the hook for that bill.

Hegde says Helix’s infrastructure will allow them to offer the test at a greatly reduced rate when it actually launches on the platform a few months from now, though she couldn’t give an exact price tag. That includes whole exome sequencing on their Illumina machines (that’s the portion of the genome that codes for proteins), and the physician network that Helix has already built out to accommodate any products that might require a doctor’s signature. That’s right, to buy this test you’ll still need to talk to a doctor—just maybe not the one you’re used to seeing for your annual check-up.

Customers who want to buy PerkinElmer’s test have to fill out a brief questionnaire—some basic family history and reasons why you might want to take the test—which gets routed to a hire-a-doc third party. If there’s a chance they’re already presenting symptoms or have a family history suggesting a condition that would be covered by insurance, they’ll suggest that user go the traditional testing route through their primary physician. If they appear healthy, they get the all-clear to order the test.

Then Helix sequences all 22,000 coding regions of the customer’s genome and sends the file over to PerkinElmer for analysis, which takes about a week. If they find anything that requires further attention they’ll bring in some real humans to compare what they know about the customer with what they know about the variant—how it’s inherited, how it changes pathways in the body. It could take another week to spit out that report, which goes back to the physician network, which then contacts the customer with any variants that could require follow-up. Genetic counseling services also bundled through Helix’s platform will be available upon request.

“We’re really trying to focus on the 99 percent of people that have never had access to this kind of testing, but of course we want it to be responsible access,” says Helix co-founder James Lu. “It’s for people who are ostensibly healthy and want to stay that way for as long as possible.”

Access to those kinds of proactive customers are what drew Hegde to Helix. “Not a lot of people know about this kind of testing,” she says. “But for every one of the 59 genes on this list there are interventions, and earlier intervention translates to saving health care costs as well as lives.”

It’s true that on an individual level, knowing you have a bad BRCA mutation might lead you to more regular check-ups and an earlier diagnosis of breast or ovarian cancer. But on the question of whether or not widespread genetic testing will actually lead to better outcomes and cut costs? Researchers still aren’t so sure. And with only about 4,000 certified genetic counselors total in the US—or one for every 80,000 Americans—it’s hard for most medical professionals to justify widespread testing. But hey, if your doc won’t order up a test you want, we’re betting Helix can find you one who will.