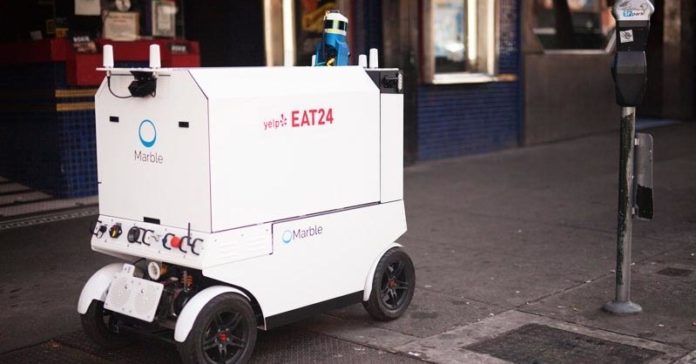 Self-driving cars have it rough. They have to detect the world around them in fine detail, learn to recognize signals, and avoid running over pets. But hey, at least they’ll spend most of their time dealing with other robot cars, not people.

Now, a delivery robot, on the other hand, it roams sidewalks. That means interacting with people—lots of people—and dogs and trash and pigeons. Unlike a road, a sidewalk is nearly devoid of structure. It’s chaos.

Block by block, a San Francisco startup called Marble has been trying to conquer that chaos with a self-driving delivery cart. Today, they’re announcing a new, more powerful robot they hope is up to the task—and that will prove to skeptical regulators that the machines are smart enough operate safely on their own.

Marble’s previous robot is what we might call semi-autonomous. It can find its way around, but a human chaperone always follows to remote-control it out of trouble. But that’s a temporary measure—Marble wants to make these things proficient enough to find their own way around the people and the buskers and the intersections. One particularly important upgrade is extra cameras to fill in blind spots. “As you might imagine, one of the challenges that we have is seeing a small curb, understanding where it is, and driving around that in a sensible way, or telling the difference between a dog’s tail and a stick,” says Kevin Peterson, Marble cofounder and software lead. “So the upgrades in cameras have improved that.”

The new robot also has three times the amount of computing power, meaning it can crunch more data coming in from the environment. That’ll be essential for getting the robot to go fully autonomous. The idea is that instead of following the robot around, a human chaperone could someday sit in a call center and monitor a fleet of robots from afar. (Babysitter for robots is actually a hot new job, by the way.)

To get to that point, though, Marble has to be sure its robot can follow the rules of the road. “We believe it’s important to have a very polite robot that understands the kind of cues of walking through a crowd,” says Matt Delaney, CEO and cofounder of Marble. Self-driving cars have nice orderly lanes, but think about what happens when you’re walking right at another person on a sidewalk.

Human behavior on a sidewalk is weirdly complex. You know that thing where a group in front of you is walking just too slow for your liking, and you’ve got to turbo around them? Or if you’re feeling lazy, you just slow down a bit to match their speed. But you don’t follow too close, because you’re not a weirdo.

So Marble has been rating the robot’s interactions with people on the street. “When we see something really awkward happen in real life, we take that and reproduce it,” says Peterson. “There we come up with a scoring system and sort of evaluate how the system is doing.” Thus the team can objectively score the human notion of “awkwardness.”

Marble is learning that a robot has to nonverbally telegraph its intentions if it expects to get anywhere. Take a super-crowded intersection, for instance. Lots and lots of cars in a delicate ballet coming from all directions. The robot can’t just sit there and expect everyone to notice. “If you’re too cautious then cars will just drive, if you’re too bold then of course you get hit,” says Peterson. “So there’s a sweet spot, where the vehicle has to wait an appropriate amount of time and indicate that it’s going into the world.”

That means inching out a bit to nonverbally announce, Hey, I’m not just waiting on this street corner. I need to get across. Ideally at that point drivers let it pass like they would for a human pedestrian. The robot has analyzed the scenario and chosen the course of action that’s both efficient and safe.

On a more subtle level, the design of Marble’s robot also seems to telegraph information. For one, this new version is pared down (yet still carries the same amount of payload), perhaps giving it a friendlier vibe. “What we found is that people just enjoy the vehicle more if it’s smaller,” says Delaney.

Though people shouldn’t enjoy it too much. Marble has found its robot to be very … approachable. Pedestrians will stop and stand in its way, apparently to test the soundness of its sensors. Which may be inevitable in these early days of street-roaming robots—humans still want to test the novel system. So Marble’s robot comes equipped with a microphone and speaker for the human chaperone who follows it to remind gawkers that the machine is on the job.

Marble’s robot has also attracted the attention of San Francisco regulators. Last December, the Board of Supervisors voted to severely restrict the machines to areas with low foot traffic. “The business model is basically get as many robots out there to do deliveries and somebody in some office will monitor all these robots,” San Francisco supervisor Norman Yee told WIRED at the time. “So at that point you’re inviting potential collisions with people.”

Yes, whether or not we trust robots to not run down pedestrians is now a conversation we need to have. But Marble and other companies that have unleashed robots on cities are learning fascinating lessons in human-robot interaction, lessons that will shape a world we’ll be sharing with more and more machines. So if you see a robot waiting the cross the street, be patient. It’s working harder than you think.