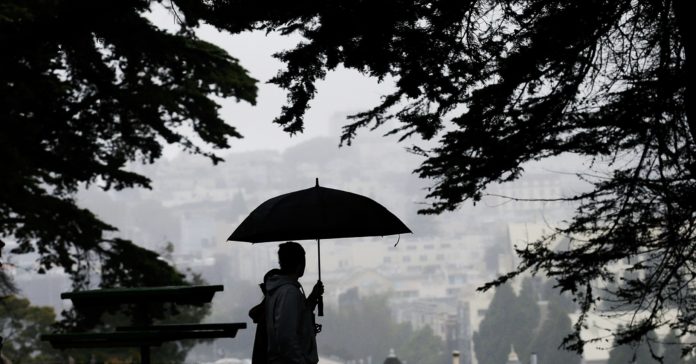 You can see it on satellite imagery—a chaotic blur of wind and water shaped like a giant alien starfish over Australia, extending a tentacle diagonally across the Pacific and right into the Golden Gate. It’s called an atmospheric river, over a thousand miles of water and wind.

This weekend is going to be as wet as an entire typical April. On the official scale, the storm will probably top out at “strong”—it might have enough water vapor transport to rate as “extreme,” but probably won’t reach “exceptional,” the real freak-out level of flood danger. That means several inches of rain. This is how California gets most of its disastrous floods, but also most of its drinking water. It’s a crazy way to do business, but understanding these atmospheric rivers might be the key to making sure the human race doesn’t die of thirst.

Atmospheric rivers come ashore on nearly every west-facing coastline on Earth. A few times a year one of them does what this weekend’s storm will do: shotguns over Hawaii and into Northern California. “It tails all the way back into the tropics, almost to the date line,” says Michael Anderson, the California State climatologist. “It’s going to come through pretty quick.”

Onshore, the fast, wet air from one of these so-called Pineapple Expresses ricochets upward off the coastal mountain ranges like a tennis ball catching the top of the net. The air rises; the water falls. That’s called “orographic enhancement,” and it’s how you get massive bursts of rain and floods.

California hoards more than half of that rain as snowfall on the tops of the Sierras. The rest it tries to save in reservoirs—a dozen big ones and about 150 littler ones scattered up and down the state. In the rainy winter months, the reservoirs fill up—ideally—leaving space for the snowmelt to come in the summer. Ideally.

It’s a balance—hold onto water for a rain-free summer and possible drought, be ready to capture snowmelt, but leave enough room to store a flood wave during the storm season. Every reservoir has a rule curve that says how much water is too much. But atmospheric rivers can make it tough to know when to apply those rules. In November and December of 2012, the Lake Mendocino Reservoir absorbed water from two atmospheric river events, enough so that the water encroached into the “flood pool,” which is supposed to stay empty for emergencies. “So the reservoir operators released the water. It was the prudent thing to do,” says F. Martin Ralph, a research meteorologist at UC San Diego’s Scripps Institution of Oceanography. “But nobody knew that there would be no more atmospheric rivers basically for the rest of the year, and that was the beginning of the drought. They never had a chance to refill the reservoir in the spring.”

So Ralph, along with the Sonoma County Water Agency (which regulates the drinking water in Lake Mendocino), the US Army Corps of Engineers (which operates the flood prevention aspects of the reservoir), and the National Oceanic and Atmospheric Administration (which monitors the salmon fishery that’s part of the lake’s hydrology) are all working on a finer-grained system. “It’s possible that with modern weather prediction we can see with some certainty these atmospheric rivers coming a few days ahead, so hypothetically one could consider keeping some of that extra water temporarily, and every day looking at the forecast to see if there’s an atmospheric river,” Ralph says. “If there’s not, the chance of there being a flood problem is essentially zero.”

The idea’s still in a planning stage; Ralph’s group is now trying these “forecast-informed reservoir operations” at Mendocino and Prado in southern California. (It’s still status quo ante at other reservoirs, like Lake Oroville—where the people in charge will be trying out their new spillway, rebuilt since the old one crumbled during last year’s rains. But if the new approach works—and so far it seems like it may—reservoirs can keep the water for a not-rainy day.

That day may be coming. Or it might not. Water in the American west was variable and unpredictable even before humans started pumping enough carbon into the atmosphere that it’d change the climate. A warmer atmosphere holds more water vapor. That by itself would strengthen atmospheric rivers. But a warmer atmosphere means warmer poles, which reduces the temperature difference between the middle of the planet and the ends. That means weaker winds and weaker ARs. “However, there’s a big asterisk on that. It’s inevitable that some storms will be just as strong in terms of wind as they are today, and they will have available to them more water vapor,” Ralph says. “There could be a class of atmospheric river storms that are a lot stronger than we’ve seen in the past.”

Ralph’s ideas for managing reservoirs better might end up being a necessary adaptation to a changed climate—and not just in California. The northwestern US gets a quarter to a third of its annual rainfall from atmospheric rivers, and they cause floods there, too. Arizona’s and Idaho’s big winter floods are often due to atmospheric rivers; a few years ago one even caused major flooding in Nashville. They are the drivers of flood and drought around the world. So understanding those ocean-spanning tendrils on satellite maps may be the solution to what’s arguably going to be humanity’s most pressing problem: figuring out what to do when the rains come, and when they don’t.

Robots Won't Take Your Job—But They Might Make It Boring