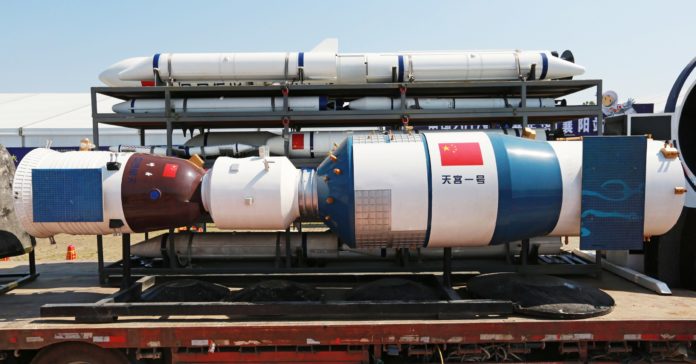 At some point this week, the Chinese space station Tiangong-1 is going to crash down to Earth. When and where? We can’t know for sure. And for that, we have physics to blame.

Tiangong-1 is in orbit around the Earth at an altitude of about 138 miles. At first approximation, there is only one force acting on the space station—the gravitational pull from the Earth. This gravitational force pulls the space station towards the center of the Earth so that it moves in a mostly circular orbit. It’s just like taking a ball on a string and swinging it around your head. The string pulls the ball so that it moves in a circle.

But wait! There’s actually more than just the gravitational force. We like to pretend that outer space is an empty vacuum—but there are plenty of gases up there. And in the case of objects like Tiangong-1 in low Earth orbit, there are also still some atmospheric effects from the Earth’s air. Oh sure, the air is super thin up there, but even a little bit of air resistance can make a difference over a long time. In fact, this is why the International Space Station gets an occasional reboost so that it doesn’t slow down from the interaction with the air.

This tiny air resistance force pushes on the space station in the opposite direction of its motion. It’s just like sticking your hand out the window of a moving car—but in space. This backwards pushing force decreases the speed of the space station so that it has a lower orbit. Oh, and what happens when the orbit gets lower? Yup, the object moves further into the atmosphere where there is even more air and greater air resistance. This can quickly lead to a runaway effect that heats up the object—so much that most of it will burn up during re-entry.

Now, if the basic physics of re-entry is understood, then why don’t when know when and where the Tiangong-1 will land? The short answer is that the motion of the space station is very sensitive to initial conditions. Let me explain this by making a model of something similar to the Tiangong-1 in low Earth orbit.

When building something, it’s best to start off simple. Here is a numerical model for an object in orbit around the Earth with no air resistance (here is an example of the physics from an older post). Note: You can indeed rotate your view here. Just right-click-drag (or ctl-click-drag) to view the orbit from another angle (for fun). If it stops, just click the “play” button to start it again. Oh, and the orbital height is to scale, but the size of the space object is greatly exaggerated so that you can see it.

Now I want to add an air resistance force to the orbiting object. This air resistance force will depend on the size and shape of the object, the velocity of the object, and the density of air. It’s that last one, the air density, that’s the tough part for our purposes. Of course as you get farther from the surface of the Earth, the air density decreases, but getting the density as a function of altitude isn’t so easy. Fortunately, someone has already created such a density model—you can check it out here.

I’ll skip over the details but there should be enough comments in the code for you to figure things out. I won’t include the visualization since it basically looks the same as the previous one except this time it eventually “crashes.” Instead, I will just show you a plot of the altitude as a function of time.

Notice that with these initial conditions, it took a little over 8,000 seconds to crash. But what happens if I change the atmospheric density just a tiny little bit? (This isn’t a totally crazy idea; the Earth’s atmospheric density actually changes all the time depending on the weather). So let me modify the density function for just the very highest altitudes—just a super tiny bit. This is such a small atmospheric change, you can barely see it. Here is a plot of the density as a function of altitude for my two atmospheric models.

Now when I run two identical objects with the exact same initial conditions (except for the atmospheric density), I get the following.

Here you can see that the object with slightly lower air density crashed about 16 minutes after the other object (here is the code if you want to play with it). That might not seem like a big difference, but it is. Remember, this is just a model of orbiting objects. I created it so that they would “crash” in a reasonable amount of time. In reality something like Tiangong-1 is in an orbit such that it is influenced by the air drag over a very long time by a very little amount. Any tiny changes to the atmosphere will make huge differences in the final outcome. And that’s just modeling one variable that could impact its trajectory.

So no, we don’t know exactly when and where the Tiangong-1 will crash. We have a fairly good idea of its current altitude and velocity (but not exactly), but we don’t have a perfect model for the density of air. (It actually gets worse: I used a model for air drag that most certainly does not apply to cases where the density is so low and the speed is super high.) Here’s the good news, though: While physics is your enemy when it comes to knowing the space station’s landing site, statistics is your friend when it comes to knowing if it’ll hit you. It won’t. You, after all, are a very tiny person on a very large planet.

GizmoCrazed - October 23, 2017 0
In the lab at Bolt Threads in Emeryville, Calif., technicians are using yeast enhanced with spider DNA to brew silk proteins that are spun...

Wizeline expands its outsourced IT services business into southeast Asia