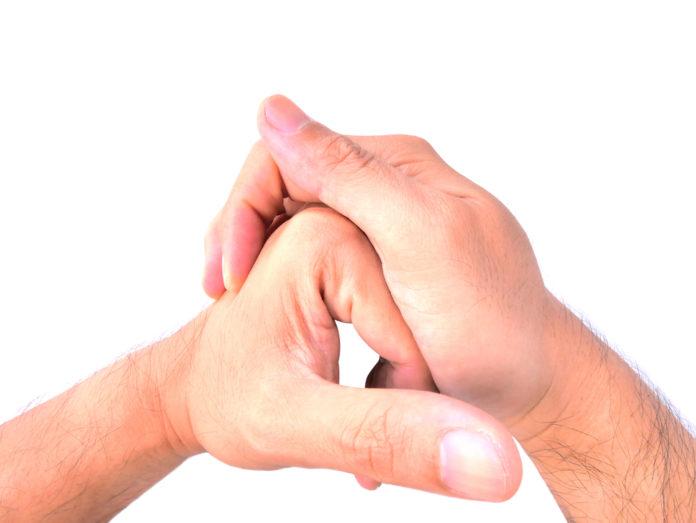 Love it or hate it, knuckles crack.

For some the noise signals a welcome release, while others cringe at the thought of joints shifting about in their sockets. The sound itself, though, is still a bit of a mystery.

Researchers have debated the source of the sharp pops for over a century now, and actually thought they had it cracked in the 1970s. The event was simply the sound of bubbles in the sinovial fluid between our joints collapsing, researchers concluded, the result of something called cavitation.

You experience cavitation every time you open a can of soda. The can’s contents, including the CO2 dissolved in the liquid, are under pressure, and when you release that pressure by opening the tab, some of the CO2 turns gaseous, forming bubbles. The same thing happens in our joints when we stretch them out a bit — the sudden expansion lowers the pressure and bubbles form, only to disappear when the pressure returns. Pop pop.

But that theory was deflated recently by the discovery that bubbles in our sinovial fluid persist even after a good cracking. If the sound came from them being compressed, they should all be gone. It’s a fairly intuitive explanation, too. We all know we can’t crack our knuckles two times in a row — it actually takes about 20 minutes to reset the system.

This is where Vineeth Chandran Suja comes in. He’s a PhD student at Stanford, and he studies bubble formation in lubricants. Normally this means industrial fluids, but his specialty applies equally well to the lubricating fluid that bathes our joints, and which is responsible for the cracking. The idea actually came to him while thinking of a topic for a class project, he says. Suja happened to crack his knuckles as he was thinking, and the idea popped right into his head.

Along with his former professor Abdul Barakat, of the University of California, Davis, Suja took a mathematical approach to the problem. The two start by modeling a cavitation bubble inside the sinovial fluid, and then watch what happens as it the pressure returns and it grows smaller. They were looking to see what kind of acoustic waves the bubble’s deformation would produce in order to match it with actual recordings of knuckles cracking. They published their findings Thursday in Scientific Reports.

This kind of modeling is actually ideal for the problem, Suja says, because current imaging techniques aren’t fast enough to catch the behavior of the bubbles in action.

“We realized that mathematics could provide us with this convenient third eye that is required to look into the dynamics of knuckle cracking extremely accurately,” he says.

Ultimately, they found that their model was able to reproduce the acoustic signals of knuckle cracking extremely accurately when they assumed that the bubbles collapse and deform but don’t disappear. The finding lines up with previous research assuming that the sounds come from cavitation bubbles while also explaining why they stick around.

“We show that a partially collapsing bubble could quantitatively reconstruct the acoustic spectra which is observed experimentally with knuckle cracking,” Suja says. “A sudden collapse in such an environment causes rapid variation in pressure, and that’s nothing but sound.”

And as for worries that constant knuckle cracking could lead to damage or pain down the road, Suja says their model doesn’t alter existing advice a bit — cracking your knuckles won’t cause any harm.

Researchers find the best way to press a button

GizmoCrazed - March 21, 2018 0
When all you have is a finger everything looks like a button. But what happens if you’re unable to press buttons or, more likely,...

Women's Pain Is Different From Men's—the Drugs Could Be Too