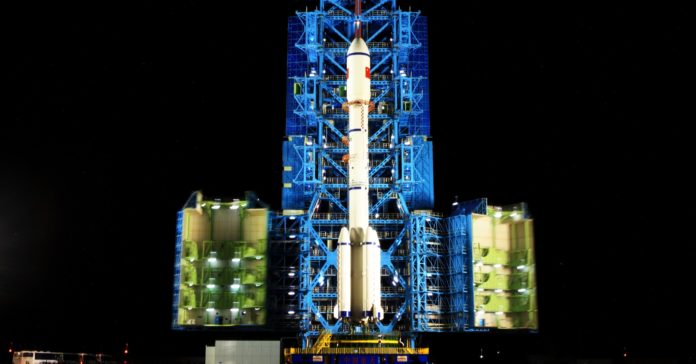 No one knows exactly when or where China’s abandoned Tiangong-1 space station will return to Earth. But the map on Ted Muelhaupt’s computer gives him a better idea than most. “I’m looking at it right now, and it’s telling me the vehicle’s not gonna land in Quito,” he says. The date is Thursday, March 29, around 12:30 Pacific—63 hours before Muelhaupt predicts the 18,000-pound spacecraft, which is roughly the size of a school bus with wings, will reenter the planet’s atmosphere, break apart, burn up, and rain down in bits and pieces on the earth below. “It looks like most of Texas is safe. Southern Florida, too. Although, at this resolution, I can’t say for certain whether northern Florida is clear.”

Muelhaupt is an engineer at Aerospace Corporation, a federally funded R&D organization, where he manages the Center for Orbital and Reentry Debris Studies. Among his group’s specialties are simulating uncontrolled reentries of spacecraft like Tiangong-1 and predicting when and where they will plunge from the sky. Think Chicken Little, minus the alarmism, plus a lot more math.

On Muelhaupt’s computer screen is something aerospace types call a ground track: a map of Tiangong-1’s current and future path above Earth’s surface, traced out in sigmoidal lines. The space station’s last known position above the planet is marked with a red X, its present orbit with a red curve. Surrounding it are more curves (depicting projected orbital paths), which overlap into a basket-weave pattern that spans 43 degrees north to 43 degrees south.

“Tiangong’s going to land somewhere under the basket weave,” Muelhaupt tells me. “But all the gaps in the basket are safe. If you’re not under one of those lines, you’re not gonna get hit.”

I look at the ground track. It’s mostly gaps:

And those gaps will only expand. Every few minutes, between now and Sunday, when the space station is projected to reenter Earth’s atmosphere, the interweaving lines of Tiangong-1’s ground tracks will grow increasingly sparse, until they resemble not a latticework, but a few s-shaped swoops across the planet’s surface.

That’s a good thing. The swoops stand for uncertainty; each depicts a path along which Muelhaupt’s models project Tiangong-1 could be traveling when it finally plunges through Earth’s atmosphere. The closer the satellite dips toward its fiery homecoming, the fewer the swoops; the fewer the swoops, the more confident Muelhaupt’s forecast of where the spacecraft won’t come hurtling through the atmosphere. (Already you can see this transformation happening: Aerospace produced the above ground track midday Thursday, while I was talking with Muelhaupt. The animation below compares that map with one produced on Friday. Notice how the newer map features fewer overlapping paths.)

Far more difficult to say is when Tiangong-1 will achieve reentry, and where the ensuing debris will land. To understand why, consider two things: The tremendous speed at which Tiangong-1 is moving (more on that in a bit) and the number of variables risk analysts like Muelhaupt have to input into their calculations. To list just a few:

So yeah. It’s a lot of things to keep track of.

And each of these variables is, well, highly variable. When your guess about one thing (i.e. when and where a spacecraft the size of Tiangong-1 will disintegrate and combust) depends on guesses about multiple other things, it can lead to some big unknowns.

It’s here that one must consider Tiangong-1’s speed. Earth is 24,901 miles in circumferece, and China’s space station is currently orbiting the planet about once every 88 minutes. Divide the former by the latter, and you get a ground speed of 283 miles per minute. In other words: Even if Muelhaupt and his team were lucky enough to get a bead on the satellite at the start of its final orbit (which isn’t guaranteed), their error window would still be plus or minus 18 minutes—enough time for Tiangong-1 to cover a 5,000-mile swath of Earth’s surface.

That said, reentry analysts do get lucky from time to time. When Muelhaupt and his team tracked the reentry of Russia’s Phobos-Grunt spacecraft in 2012, a radar station spotted the satellite’s position with half an orbit to go, allowing them to refine their predicted reentry zone: They’d known previously to expect the vehicle in the South Pacific, but they weren’t certain whether it was going to come down closer to the Philippines or South America. It turned out to be the latter.

Beginning Saturday afternoon, Muelhaupt and his colleagues will be camped out with their projections, ready and waiting for similar last-minute updates on Tiangong-1’s status. An inopportune time, he says—but then, real-world events are typically this way. He breaks it down for me, as a person in his field would: “There are 21 eight-hour shifts in a seven day week. Business hours account for just five of them. Which means that 75 percent of the time, these reentry events happen at inconvenient times.”

An inconvenient time, perhaps—but similar odds all but ensure Tiangong-1 will reenter orbit in a convenient place: Water covers roughly three quarters of the planet, which means any incoming debris is likely to land in the drink, far from people. And even if some bits of wreckage do reach land, Muelhaupt and his team have calculated that humanity’s relatively sparse distribution across the planet’s surface means the odds of them harming you are vanishingly slim. Like, a trillion-to-one slim.