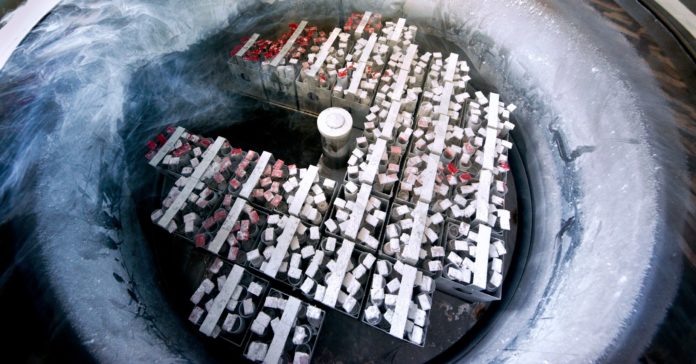 On March 4, an embryologist at Pacific Fertility Center was doing a routine walk-through of the clinic’s collection of waist-high steel tanks, each one filled with thousands of liquid nitrogen-bathed vials of frozen sperm, eggs, and embryos. The San Francisco-based clinic offers cryogenic cold storage and in vitro fertilization services for patients throughout the Bay Area, many of whom work for tech companies with hefty fertility benefits packages—Apple, Google, Facebook, Pinterest, LinkedIn. PFC charges its patients $600 a year for storage alone, which covers the personnel required to maintain the tanks, according to its website. Every day someone has to do a physical inspection of the equipment, and staff are on-call 24/7. But that Sunday, the embryologist discovered that in one tank, Tank No. 4., the liquid nitrogen levels had slipped to dangerously low levels.

PFC staff immediately began transferring the threatened tissues to a spare storage tank filled with liquid nitrogen. They then spent the next five days sorting through records to figure out which patients had been affected—about 500 in total. Calls and emails began going out over the weekend. Bill Taroli, though, found out on the nightly news.

This past Sunday night, he was watching at home in California’s Castro Valley when a story came on about a tank malfunction at a fertility clinic in Cleveland. At first, he almost didn’t notice when the letters “PFC” popped up on a corner of the screen. He had to roll it back and rewatch the segment three more times before he realized the reporter was indeed saying that another failure had also taken place at Pacific Fertility Center, on the same day. Taroli’s stomach knotted up. That was the clinic where he and his husband had four frozen embryos—three boys and a girl—waiting to one day join their family.

The couple had worked with PFC to bring their son into the world five years ago, and had always planned on having another child. So on Monday, Taroli emailed the clinic and in the evening got a call from their physician, Dr. Eldon Schriock. He was kind, but frank. All of their embryos had been stored together in the same vial, in the tank that had failed. They were going to thaw one of them to see if it was still alive. If one was gone, they’d all be gone. It would take a week or two to know for sure.

“We’re kind of in a holding pattern right now, like a weird limbo state,” says Taroli. PFC told him they’ve already tested some tissues and found them to be viable. But it could be months before every patient has a concrete answer. “Having been through this before there’s a part of us that knows it was never a sure thing,” he says. “But having the door completely closed on you is very different. The only thing buoying me up right now is the hope that we may still find there was no damage. At this point we just don’t know.”

Even though more than 5 million babies have been born thanks to IVF since the ’70s, egg and embryo freezing is by no means a sure path to parenthood. According to a 2014 study by the British Human Fertilization and Embryology Authority, IVF is only successful about a quarter of the time. Women who used their own frozen eggs fared even worse—with 14 percent success rates. The science is pretty straightforward; patients are injected with drugs to stimulate the ovaries, the eggs are then removed to be either fertilized and frozen, or frozen straight away with a process called vitrification. Think of it as a flash-freeze, a massive rapid temperature drop that keeps water crystals from forming and damaging the cell. But every processing stage introduces risk.

Taroli and his husband started out with 18 eggs from their donor. Twelve were successfully fertilized. Eight made it past the three-day inspection. On the seventh day, each ball of 100 cells was tested and scored for chromosomal abnormalities; five were considered viable. One became their son. The other four went into Tank No. 4.

Taroli says he was made aware of these risks, and others that arise during the freeze-thaw cycle, when he and his husband signed their contracts with PFC. Storage in liquid nitrogen, on the other hand, has been considered pretty fool-proof, provided you have enough of it. The tanks are quite simple, just metal welded into an inner and outer tank to create a vacuum seal—no moving parts. As long as they stay full, you’re fine. “I’ve been doing this since 1983 and I’ve only ever seen one slow leak that was easily rectified,” says David Ball, laboratory director of Seattle Reproductive Medicine and a past president of the Society for Assisted Reproductive Technology. “I’ve never seen a total loss situation.”

There are, of course, best practices to make sure that never happens. Ball says the simplest—and most foolproof—is a daily physical evaluation. Using a yardstick-like instrument, you measure how much liquid nitrogen is in the tank, and then graph that out to track your evaporation rate. If it starts accelerating suddenly, something’s probably wrong with the tank. The next level up from that is an electronic monitoring system; probes in the tank that trigger an alert if the temperature rises above a specific threshold. These are useful for round-the-clock control, but also subject to calibration errors and failures in the event of a power outage.

According to PFC’s website, its San Francisco facility has all of these systems in place. Each tank is topped off daily; if not filled regularly, the nitrogen would evaporate entirely in about a week. And two separate alarm systems, when triggered by tank sensors, will send out calls to the clinic’s staff over and over until somebody enters the lab and cancels the alarm. It’s not yet clear why they didn’t work for Tank No. 4. PFC’s President and medical director, Carl Herbert, told ABC News that in the wake of the tank failure they’ve since ordered a third alarm system.

While Pacific Fertility declined to answer any specific questions, it did send WIRED a statement through a spokesperson confirming the details of the March 4 incident and the existence of viable tissue from the affected tank. The statement went on to say that PFC has brought in a third party for a full investigation and that in addition it has “completed a physical inspection of all of the lab equipment and have also thoroughly reviewed all cryo-preservation protocols with staff. We are truly sorry this happened and for the anxiety that this will surely cause.”

The American Society for Reproductive Medicine said it plans to review the incidents with both clinics and their equipment suppliers this week. In the meantime, Ball says clinics all across the country are going over their own protocols with a fine-toothed comb. There aren’t any laws in the unevenly-regulated fertility industry that safeguard against cryo failure events. And how often frozen eggs or cells are damaged is unclear, because there is no central reporting mechanism.

The Food and Drug Administration and the Centers for Medicare and Medicaid Services do oversee certain aspects of fertility clinics, and the Centers for Disease Control and Prevention collects IVF data. But they don’t do site visits to inspect storage tanks or track reports of damaged tissues. The College of American Pathologists, which accredits more than 400 fertility labs, conducts bi-annual inspections, but their checklists for best practices are pretty generic—there aren’t standards for alarm systems, for example. “The vagary is there on purpose to allow programs enough room to maneuver around a system that works for them,” says Ball. “Each facility may not be amenable to a one-size-fits-all approach.”

Oversight also differs by state. California requires clinics be accredited; Ohio does not. Patients are already mobilizing for a class-action lawsuit against the University Hospitals Ahuja Medical Center’s Fertility Center in Cleveland, the other center whose systems failed. According to ASRM, no legal action was underway against Pacific Fertility Center, yet. It’s hard to know how strong a case for negligence they’ll have until the formal investigations are completed. But cryogenic experts outside the fertility field say some details of the incidents raise red flags.

“It’s really quite sad the samples weren’t split up,” says Nahid Turan, who directs laboratory operations at the Coriell Institute for Medical Research, one of the oldest and largest biobanks in the US. “They were literally putting all the eggs in one basket.” In addition to having samples in multiple tanks at their New Jersey facility, Coriell also has back-up sites in multiple locations around the country. And its software engineers built real-time monitoring systems to flag any tanks trending in a troubling direction, before they fail.

For Taroli, hope for his family’s future wasn’t just in one tank, it was in a single tube. And for now at least, like Schrodinger’s Cat, it’s still alive.

Top 10 Must Have Android Games

GizmoCrazed - August 12, 2011 3
Looking for some cool games to play on your Android smartphone? Here is our list of  Top 10 Android Games you must have on...

The Quest to Make a Robot Cat Walk With Artificial Neurons