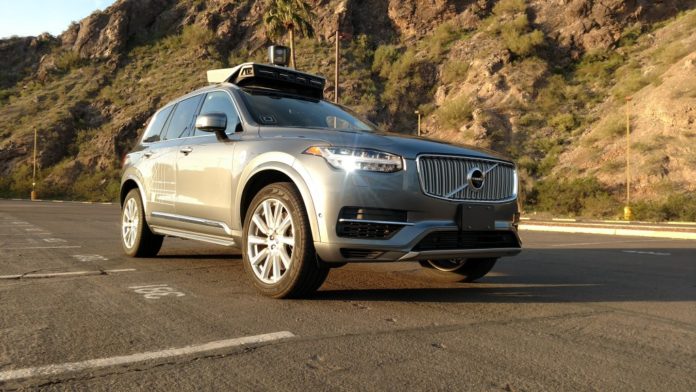 An Uber self-driving car prototype on the road. Credit: Uber

A self-driving Uber accident that killed a homeless woman represents a somber milestone in the development of self-driving car technologies. Now a video of the accident may raise more questions about why the Uber vehicle failed to react to the woman and thereby claimed the life of the first pedestrian victim in self-driving car history.

The video released by police shows two views of the accident that took place in Tempe, Arizona on the night of March 18. An outside view of the front of the car shows how Elaine Herzberg, 49, suddenly gets illuminated by the onrushing Uber SUV’s headlights as she was walking her bike across the street. Another inside view shows the Uber driver, Rafaela Vasquez, 44, appearing to look between the road and down at something inside the vehicle just before the self-driving vehicle—traveling in autonomous mode—collided with Herzberg.

Warning: The video contains scenes that many may find disturbing.

Some early statements by the Tempe Police Department seemed to generally excuse both the Uber self-driving technology and Vasquez, the backup safety driver, given the dark nighttime conditions and the fact that the victim, Herzberg, was crossing the road outside the designated intersection crosswalk. “It’s very clear it would have been difficult to avoid this collision in any kind of mode,” said Sylvia Moir, police chief in Tempe, Arizona, in an interview with the San Francisco Chronicle. “The driver said it was like a flash, the person walked out in front of them.”

But the newly released video seems likely to raise questions about why Uber’s self-driving car either failed to detect Herzberg with its sensors or attempt some braking or evasive action to avoid a collision. After all, the safety promise of self-driving cars is based on the idea that a smart, AI-driven vehicle—loaded with sensors theoretically capable of detecting objects in darkness and bad weather conditions—should be a safer and more capable driver than an ordinary human driver.

How a Self-Driving Car Killed a Person

The video shows that the fatal accident occurred while the self-driving car was traveling on a straight section of road during the night. Herzberg appeared to have been walking her bike at a normal pace across the roadway at the time the vehicle struck her.

Such conditions should made it straightforward for the self-driving Uber to detect Herzberg well before she appeared in the headlights, said Steven Shladover, a research engineer at the University of California, Berkeley, in an interview with Wired. He pointed out that Herzberg appeared to have been walking in full view of the self-driving Uber’s sensors and at a simple 90-degree angle to the direction the self-driving vehicle was traveling.

That is certain to raise questions for Uber engineers and many other experts about what exactly was going on under the hood of the self-driving vehicle. But Wired writer Aarian Marshall also draws attention to the fact that the Uber safety driver, Vazquez, did not seem ready to respond and take the wheel in the wake of the self-driving vehicle’s apparent failure to spot Herzberg. That may lead investigators to consider the training and potential limitations of the human backup drivers currently babysitting the self-driving Ubers roaming around on public roads.

In any case, friends of Herzberg reacted angrily to early police statements that seemed to deflect blame from Uber to the victim. One friend told The Guardian that the case should be considered “negligent homicide” with the government also being held responsible. Another friend declared that Uber “should be shut down for it.”

The Scene of the Accident

The area where the self-driving Uber struck Herzberg was described by the Phoenix New Times as one popular among pedestrians. The newspaper also pointed out that mid-street crossing is common in the area, in no small part because the median between the two one-way roads that Herzberg was crossing contains an apparent pedestrian walkway.

But the apparent pedestrian walkway is actually a trap, according to Eric Paul Dennis, a transportation systems analyst at the Center for Automotive Research in Ann Arbor, Michigan. He pointed out that the brick-paved walking path across the median leads to no connecting crosswalks and actually has signs telling pedestrians not to use it. “This is beyond pedestrian-hostile design; it’s damn-near entrapment,” Dennis wrote in a Twitter message.

Here’s an aerial view (facing south). Every entrance to that brick pathway in the median has a sign instructing you not to use it. Per the signage, it is strictly ornamental. pic.twitter.com/jW1DUjiuxb