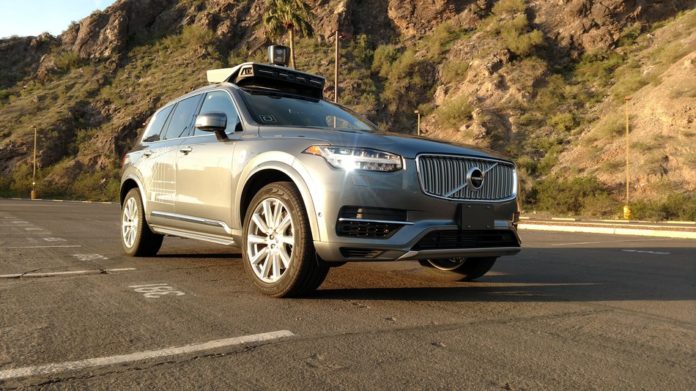 In the 11 days since a woman walking her bike across a major thoroughfare in Tempe, Arizona, was struck and killed by a self-driving Uber, the San Francisco-based ride-hailing company has generated a relentless flow of news.

The crash occurred at 10 p.m. on March 18 on a four-lane road in the city just outside of Phoenix where Uber’s self-driving program has been testing on public roads. A few days after the crash, Tempe police released a video showing the operator and roadway seconds before the Volvo XC90 SUV fatally hit the woman.

Uber suspended its self-driving tests at its four locations in San Francisco, Pittsburgh, Toronto, and Phoenix following the crash. The investigation is ongoing with little information revealed about what happened and how the self-driving tech reacted (or didn’t react), making it even more unclear who is legally responsible.

The latest update is that the family of 49-year-old Elaine Herzberg, the woman killed in the crash, has settled for an undisclosed amount with Uber. Reuters reports that an Arizona law firm representing Herzberg’s daughter and husband will not take the ride-hailing company to court over her death.

Uber did not respond to a request for comment about the settlement.

A new report found the number of sensors on Uber’s self-driving cars was drastically cut back. Reuters found the driverless Volvos used in testing in places like Phoenix since 2016 had only one lidar sensor on its roof. Uber used to have seven of the light and laser detection units on its older Ford cars, reducing the vehicle’s perimeter sensing abilities.

This adds to a New York Times report from last week that revealed Uber was racing to hit mileage and service goals and falling behind competitors like Waymo, according to leaked internal documents.

Chip maker Nvidia announced it was pausing all its self-driving car programs in the wake of the fatal crash, but its CEO clarified that its technology wasn’t used in Uber’s vehicles — the company uses its own tools.

Arizona also announced this week it was indefinitely suspending Uber from operating its self-driving car tests in the state. This comes after chummy emails were revealed through a Guardian report that showed the Arizona governor encouraged and helped the company test the new tech in the state, which has fewer restrictions than California.

Top all this off with Uber’s decision to not renew its autonomous test driving permit in California. Although its self-driving operations there are already suspended, its permit ends on Saturday.

In a somewhat tangental development, the head of Uber’s truck logistics app is leaving the company. Lior Ron is a cofounder at Otto, the self-driving truck company that Uber acquired in 2016. He came to the company with Anthony Levandowski — the former Waymo engineer at the center of the Uber v. Waymo trial related to driverless car trade secrets that was settled earlier this year.

About Ron’s departure, Uber said in a statement this week, “We remain fully invested in and excited about the future of Uber Freight. Since launching in Texas, we have introduced Freight to all states in the continental U.S. We believe it will continue to grow as we use our network and technology to transform the trucking industry.”

It’s been a lot in a short period of time.

GizmoCrazed - February 15, 2018 1
When we think of AI or Artificial Intelligence, we usually think of the following science fiction tropes, like super-advanced sentient machines that become the...

5 unicorns that will probably go public in 2019 (besides Uber...

With AI, Your Apple Watch Could Flag Signs of Diabetes