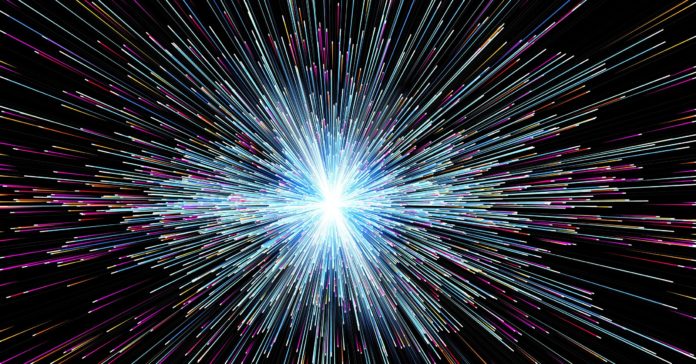 Silke Weinfurtner is trying to build the universe from scratch. In a physics lab at the University of Nottingham—close to the Sherwood forest of legendary English outlaw Robin Hood—she and her colleagues will work with a huge superconducting coil magnet, 1 meter across. Inside, there’s a small pool of liquid, whose gentle ripples stand to mimic the matter fluctuations that gave rise to the structures we observe in the cosmos.

Weinfurtner isn’t an evil genius hell-bent on creating a world of her own to rule. She just wants to understand the origins of the one we already have.

The Big Bang is by far the most popular model of our universe’s beginnings, but even its fans disagree about how it happened. The theory depends on the existence of a hypothetical quantum field that stretched the universe ultra-rapidly and uniformly in all directions, expanding it by a huge factor in a fraction of a second: a process dubbed inflation. But that inflation or the field responsible for it—the inflaton—is impossible to prove directly. Which is why Weinfurtner wants to mimic it in a lab.

If the Big Bang theory is right, the baby universe would have been created with tiny ripples—so-called ‘quantum fluctuations’—which got stretched during inflation and turned into matter and radiation, or light. These fluctuations are thought to have eventually magnified to cosmic size, seeding galaxies, stars, and planets. And it’s these tiny ripples that Weinfurtner wants to model with that massive superconducting magnet. Inside, she’ll put a circular tank, some 6 centimeters in diameter, filled with layered water and butanol (the liquids have different densities, so they don’t mix).

Then, her group of researchers will kick in the artificial gravity distortions. “The strength of the magnetic field varies with its position,” says Richard Hill, one of the paper’s co-authors. “By moving the pool to different regions of the field, the effective gravitational force can be increased or decreased,” he says, “and can even be turned upside-down.”

By varying gravity, the team hopes to create ripples—but unlike those on a pond, the distortions will appear between the two liquids. “By carefully adjusting the speed of the ripples we can model an inflating universe,” says another team member, Anastasios Avgoustidis. In cosmic inflation, space rapidly expands while the ripples of matter propagate at a constant speed—and in the experiment, the speed of the ripples rapidly decreases as the liquid’s volume remains constant. “The equations describing the propagation of ripples in these two scenarios are identical,” Avgoustidis says.

That’s important: If the resulting fluctuations look as if they might trigger structures like those found in today’s universe, then we may have had a glimpse of how inflation worked.

This isn’t the first time Weinfurtner—or anyone else—has tried to mimic cosmic phenomena on a tiny scale. Around the world, astrophysicists can be found in labs, developing ever more sophisticated set-ups using sound waves that travel just like light waves in strong gravitational fields, or magnets to trigger perturbations in fluids and gases.

Last June, Weinfurtner used a large water tank with a sink in the middle to mimic another difficult-to-observe phenomenon: the superradiance of a black hole. And it was William Unruh, a physicist at the University of British Columbia in Vancouver (and Weinfurtner’s advisor a decade ago), who pioneered the idea of simulating gravity in a lab in 1981. After all, “we cannot rerun the universe—and cannot live long enough to see the results of the experiment if we could,” says Unruh.

Analog gravity experiments have gotten more sophisticated since Unruh’s first experiment, which used a fluid simulation of gravity to show that the event horizon of a real black hole does to light what a sonic black hole does to sound. In other words: What we can measure and express in the lab can be used to explore properties of astrophysical black holes. It even works for the famous Hawking radiation, the prediction that black holes radiate heat and at some point will totally evaporate. A few years ago, Jeff Steinhauer of the Technion in Haifa, Israel, discovered the radiation’s sonic analog.

Simulations are being used to study other aspects of inflation, too. A few years ago, a team led by Christoph Westbrook of CNRS (The French National Center for Scientific Research) in Paris studied the production of quantum particles by ‘wiggling’ a ring Bose Einstein condensate—a state of matter in which the atoms have been cooled to near absolute zero, making them behave as a single quantum object. During inflation, the temperature of the universe dropped drastically, before starting to rise again when the inflation ceased with the process called ‘reheating’—leading to the ordinary Big Bang expansion.

Another experiment last October, led by physicist Stephen Eckel at the Joint Quantum Institute at the National Institute of Standards and Technology and University of Maryland, also used a Bose Einstein condensate to observe the stretching of sound waves—analogous to the stretching, or redshifting, of light that happens as the universe expands. The team also observed an effect similar to the reheating process.

Weinfurtner says that her ‘novel’ setup can work without a Bose Einstein condensate. That means that the system will be too hot to observe quantum fluctuations directly, says Unruh. But the authors argue that it will be possible to observe the fluctuations via the thermal noise in their system—an analog of quantum noise.

Their approach, say the authors, will allow them to mimic a long expansion phase, achieving—using the technical language—‘many e-folds,’ a parameter that measures the duration of inflation. Researchers believe that inflation increased the size of the universe by more than a factor of 10^26—or more than 60 e-folds—in just a fraction of a second. The new experiment, if successful, would simulate inflation for much longer period than previous lab set-ups, or have “many more e-folds than any other, enough to put the results beyond doubt,” says Ian Moss of the University of Newcastle. “You need some time to elapse for the system to forget its initial conditions and settle down to the state governed by inflationary fluctuations,” he says.

Not everyone is convinced that simulating our universe’s first moments in the lab will help cosmology, though. Ted Jacobson of the University of Maryland thinks that such experiments are “not so much verifying something we are uncertain about, but rather implementing and observing it in a lab.” Why mimic the universe in the lab? “It’s fun. And it may suggest new phenomena we didn’t think of in cosmology,” he says.

Avi Loeb, an astrophysicist at Harvard University, is not as optimistic. He says that Weinfurtner’s proposed analogy of creating ripples between two fluids in a tank will not extend to the “fundamental physical nature” of quantum fluctuations—because the experiment simply reproduces the equations physicists already use to describe inflation. If these equations are missing a fundamental ingredient, the experiment will not reveal it. “While analog laboratory experiments could incorporate quantum mechanical effects, they do not involve the interplay of quantum mechanics with gravity in the way that black holes and inflation do,” he says.

Weinfurtner’s experiment is tailored to reproduce our existing notion of inflation, Loeb adds – but it’s not meant to test it at a fundamental level. “The only way to get a discrepancy between the experiment and our notion of inflation is if we did the math wrong for one of these systems. Otherwise, we will learn nothing new,” he says.

The real test of inflation would be, Loeb says, the production of the substance that propelled it—the inflaton—in the lab. But this would require reaching energies up to a trillion times larger than those achieved in our most powerful particle accelerator, the Large Hadron Collider—and such a test seems unlikely in the near future.

“Just mimicking the equations of an analogous system is a metaphor to the real system, not an actual test of its fundamental properties,” says Loeb. It’s like “smelling food instead of eating the actual food,” he adds, only “the latter has the real value.”

That’s true, but sometimes the smells from a kitchen can tell you a lot about what was served for dinner.