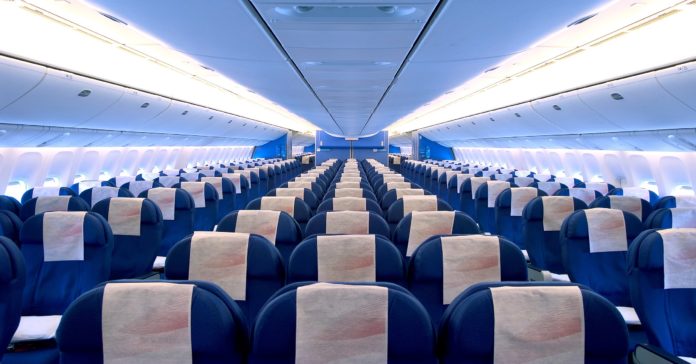 If you want to avoid getting sick on a plane, the worst place to sit, according to Charles Gerba, is along the aisle. The issue is exposure—not just to other passengers, but anything they touch. That means obvious hot spots (arm rests, tray tables, in-flight magazines) and less-obvious ones like aisle seats, which people use to steady themselves as they move about the cabin, frequently on their way to and from a lavatory.

Oh right, lavatories. Don’t get Gerba started on those. Overtrafficked and underserviced, many are swarming with E. coli. “Your typical flight will have one for every 50 people,” he says. “Sometimes it’s more like one per 75.”

Gerba is an environmental microbiologist at the University of Arizona, where he studies how diseases spread through indoor spaces. Planes. Kitchens. Casinos. Cruise ships. He’s an internationally renowned expert on fomites (i.e. objects and surfaces that are liable to carry infectious matter), a bottomless cesspit of stomach-turning stories (one of his go-tos involves someone projectile-vomiting into a spinning roulette wheel), and, this probably goes without saying, one of my favorite people to talk with about infectious diseases.

So when I caught wind of an impressive study about virus-transmission aboard airplanes in this week’s Proceedings of the National Academy of Sciences, Gerba was the third person I called. Calls one and two were to the study’s lead authors, Emory University biostatistician Vicki Hertzberg and Georgia Tech biomathematician Howard Weiss. However neither was allowed to give interviews without official approval from Boeing, the study’s sponsor, which the researchers had yet to receive.

Which is a shame! Because, as I said, their study was impressive: To investigate how an infection might spread aboard an aircraft, Hertzberg and Weiss conducted observations of passenger behavior on actual flights. Which, well, nobody had ever done before. “It’s one of the most sophisticated studies I’ve seen,” Gerba told me. And their in-situ observations of passengers could improve our understanding of the role that air transportation plays in the spread of illnesses and epidemics.

That’s because most of what we know about disease transmission aboard airplanes is based on indirect evidence. Gerba, for instance, studies planes by swabbing their surfaces for microbes. Computational models of disease-spread do exist, but most account only for the displacement of an infected person from one geographic location to another—not how that person might transmit their infection en route. The upshot: Many risks of disease transmission aboard airplanes remain largely unknown.

Consider, for example, the “two-row-rule,” popular among public health agencies like the CDC and WHO, which states that an infected passenger poses the greatest risk of transmission to those sitting within two rows of them. That guideline is based on case studies which, despite being empirically based, tend not to account for how people move about an airplane. Oversights like these could explain why case reports of disease transmission aboard airplanes have also seen infections spread to passengers well outside the two-row vicinity of the primary infection.

Things like passenger movement are important to include in epidemiological models. The main transmission vehicle for viral infections like flu are the droplets of saliva and mucous that an infected person ejects, which are usually at least five micrometers in diameter. That’s pretty big, biologically speaking, which means they rarely make it more than a meter before landing on something. But people often move around during a flight, expanding their area of transmission beyond their assigned seat. At least in theory.

To test that theory, Hertzberg, Weiss, and a team of researchers took to the skies. Dividing into teams of two, they sat at five-row intervals throughout the economy cabins of single-aisle aircraft, where they proceeded to log detailed notes on the behavior of everyone aboard. On 10 transcontinental US flights, the researchers kept tabs on 1,540 passengers and 41 crew members, logging things like whether, how often, and for how long a person left her seat. How many visits she made to the bathroom. How long she waited to use the bathroom. How much time she spent in contact with other passengers. And so on.

Their observations are probably the most detailed account of in-flight behavior ever compiled, and are loaded with fascinating tidbits about the risks that people take aboard an airplane every time they leave their seats—and how where you sit hurts or helps your chances of becoming sick.

For instance: Thirty-eight percent of passengers didn’t leave their seats during their flight, and 38 percent left once (the rest left more frequently). Perhaps unsurprisingly, the proportion of people who got up during the flight varied by seat assignment: People sitting in the aisle were most likely to move beyond their seating area, then middle seats, then windows. Aisle sitters also came into contact with other passengers more than five times as often as people in window seats.

I could go on. OK, I’ll go on. Of the 1,296 passengers who had close contact with passengers outside their one-meter radius, the median duration of contact was 47 person-minutes (the average crew member spent a staggering 1,149 person-minutes in contact), presenting ample opportunity to spread germs throughout the plane.

All that behavioral data in hand, Hertzberg and Weiss used it to simulate two scenarios of in-flight transmission of an infectious, respiratory disease—the first involving a passenger seated in a midcabin aisle seat, the second involving an infectious crew member.

Their findings were surprising: Despite all the potential for contact with other passengers, their model indicated that a respiratory infection was unlikely to be directly transmitted more than one meter beyond a vector’s assigned seat—probably because the average contact time between individuals was so low, averaging well under a minute. That meant transmission risk was effectively limited to passengers within just one row of the index passenger—even smaller than the area allotted by the two-row-rule. The infected person’s 11 nearest neighbors faced a greater than 80 percent chance of infection. All the remaining passengers, however, had a lower than 3 percent risk.

On average, the researchers write, “this manifests as 0.7 additional infected passengers per flight.” Because they spend so much more time in contact with passengers, the model predicts an infected crew member stands to infect an average of 4.6 passengers.

So why have past case studies reported transmissions well beyond two rows? A likely explanation is that some of these transmissions didn’t occur in flight. “There are so many possible ways for travelers to move and interact, and the way they do so on a plane, in the air, is just one of them,” says Embry Riddle aerospace engineer Sirish Namilae, an expert in the computational modeling of active particles. “Transmission could also occur while boarding, deplaning, while waiting at your departure gate, or while making your way through security.”

Namilae says he’s developing models to simulate transmission at each of these choke points, to see how different layouts and boarding strategies might affect disease spread. He adds that while Hertzberg and Weiss’ study is impressive and valuable, it also highlights the limitations of observational work. “They struggle to account for the multitude of potential real life cases. You can sit aboard 10 flights, but with computation models you can simulate hundreds of thousands of scenarios across various environments.”

Hertzberg and Weiss cop to their study’s limitations, too. In their paper, they advise not to extrapolate their findings to double-aisle cabins, or to local or international flights, with different lengths that could lead to different passenger behaviors.

Asked why Boeing would keep Hertzberg and Weiss from talking about their findings until after their study was published, Gerba gives a shrug. “Aerospace companies often work with researchers to see what they can do to alleviate real and perceived risks of disease transmission aboard planes,” he says, but the fact that Boeing had restricted access to the researchers in this case was surprising—especially since their findings suggest the area of risk is smaller than current guidelines indicate.

As for how to avoid getting sick on your next flight, stick with Gerba’s advice and avoid the center of the plane. The data backs him up: In Hertzberg and Weiss’s simulations, passengers in window seats faced the smallest risk of infection, whether the carrier was a crewmember or a fellow passenger. “The aisle,” as Gerba says, “is where they get ya.”