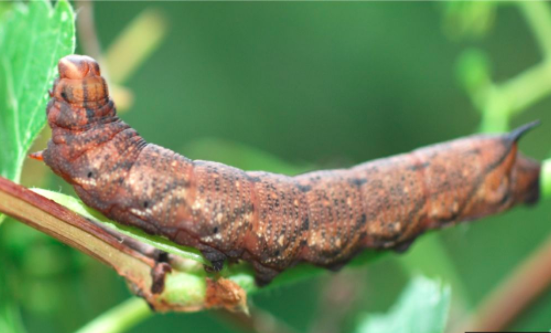 It’s hard to yell “BACK OFF!” when you have no lungs, but this caterpillar has figured out a way. Under attack, the Nessus sphinx moth caterpillar emits a sort of crackling buzz from its mouth. Scientists compare the unusual mechanism to a whistling teakettle. Or a rocket.

Lots of insects make noise, of course, as opening a window on a summer evening will remind you. Conrado Rosi-Denadai, a graduate student at Carleton University, and his coauthors write that sound-making tools in insects “have evolved multiple times and on almost every part of the body wall including legs, wings, mouthparts, head and even genitals.” Insects may rub parts of their tough exoskeleton together, vibrate them, or knock them against something to make their distinctive sounds.

Rather than relying on percussion, humans and other vertebrates tend to make noise using air, which we force out of convenient, squeezable bags in our bodies. Insects don’t have lungs. They breathe through a series of tiny holes along their abdomens. Nevertheless, some insects, such as hissing cockroaches, use air to make sound. But exactly how these noisemakers work isn’t well understood.

Rosi-Denadai and his colleagues studied the sounds of Amphion floridensis larvae. These caterpillars will become Nessus sphinx moths. When attacked—or gently pinched with forceps by a researcher—the caterpillar makes a sound kind of like an annoyed zipper: “BZZZZZZUP, zup zup zup!” (In the second half of this video, the sound is amplified with a bat detector.)

Close-up video showed caterpillars in the lab opening their little mouths while their shrieks came out. The researchers confirmed that the sound came from the mouth by setting up tiny microphones all along a caterpillar’s body and seeing where the noise was loudest: 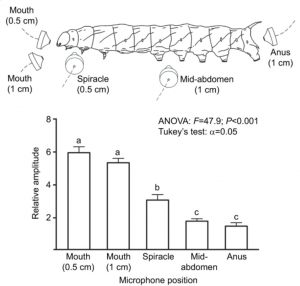 Conclusion: sound from mouth, not from butt.

The mechanism is also similar to a teakettle, the authors write, which whistles as steam builds and is forced through a small hole. But “the best analogy to sound production in vocalizing caterpillars is a rocket engine,” they say. The researchers compare the caterpillar gut mechanism to rocket motors that have large, cylindrical chambers connected by narrow nozzles—which, they write, can lead to “unintended noise problems.”

For the caterpillar, the noise is a solution, not a problem. But scientists still have questions. How does the caterpillar pull air into its gut and squeeze it back out? And how did this method of noisemaking evolve? The authors speculate that using air for sound may have evolved from another caterpillar trick: defensive regurgitation.

GizmoCrazed - January 18, 2017 0
Earth’s 2016 surface temperatures were the warmest since modern recordkeeping began in 1880, according to independent analyses by NASA and the National Oceanic and...

Alan raises another $45 million for its health insurance product

Instagram's Newest Star Is … a Tree?