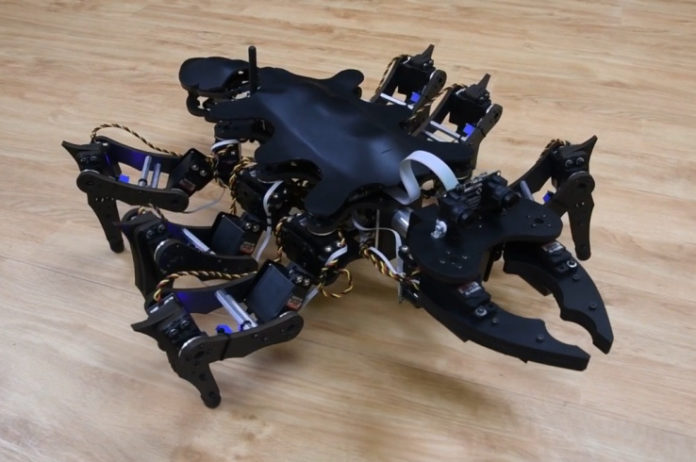 There are plenty of projects out there attempting to replicate the locomotion of insects, but one thing that computers and logic aren’t so good at is improvising and adapting the way even the smallest, simplest bugs do. This project from Tokyo Tech is a step in that direction, producing gaits on the fly that the researchers never programmed in.

“Perhaps the most exciting moment in the research was when we observed the robot exhibit phenomena and gaits which we neither designed nor expected, and later found out also exist in biological insects,” enthused the lead researcher, Ludovico Minati, in a news release.

One could program an immensely complicated AI or pattern generator to respond instantly to any of a thousand situations. But if a bug with a brain the size of a grain of sand can adapt to new situations quickly and smoothly, there must be a simpler, more analog way.

Different gaits produced by different patterns — okay, they don’t look that different, but they definitely are.

That’s what Minati was looking into, and his hexapod robot is certainly a simpler approach. A central pattern generator produces a master signal, which is interpreted by analog arrays and sent to the oscillators that move the legs. All it takes is tweaking one of five basic parameters and the arrays reconfigure their circuits and produce a working gait.

“An important aspect of the controller is that it condenses so much complexity into only a small number of parameters. These can be considered high-level parameters, in that they explicitly set the gait, speed, posture, etc.,” said one of Minati’s colleagues, Yasaharu Koike.

Simplifying the hardware and software needed for adaptable, reliable locomotion could ease the creation of small robots and their deployment in unfamiliar terrain. The paper describing the project is published in IEEE Access.

And the winner of Startup Battlefield at Disrupt Berlin 2018 is…...