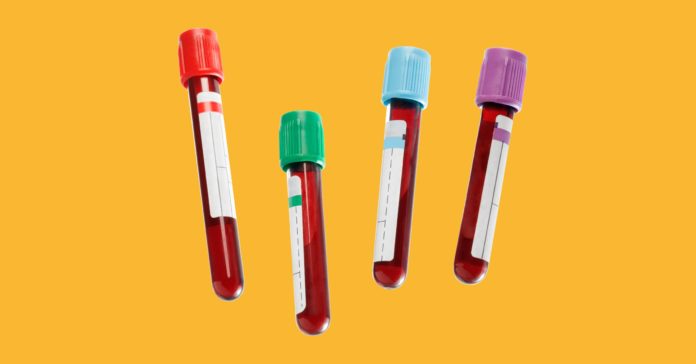 It took ten years to build the Maverick, a dorm-fridge-sized box that takes in a cartridge with a little bit of blood—more than a drop but, you know, not a pint, either—and spits out new knowledge. On the cartridge is a silicon chip carved with antibody-lined channels; if any of a range of molecules that signal things like celiac disease are floating around, they stick to the antibodies, changing the way the channel reflects infrared light. The machine goes ping. (Not literally.) “We have chips with up to 16 different tests,” says Cary Gunn, Genalyte’s CEO. “Eventually we’ll have a chip with 128 tests at once.”

So, wow. Just a little bit of blood, 10 microliters or so, and you can test for 128 different diseases or markers? And it’s being tested right now, in doctors’ offices? Hmm. There’s something familiar about this, you are thinking.

Ohhh. Right. That. A couple of years ago, Theranos, a company claiming to be able to almost magically do all sorts of medical tests on a single drop of human blood, fell apart. A brilliant Wall Street Journal investigation showed that its technology didn’t work; this week the Securities and Exchange Commission brought fraud charges against its founder. Diagnostics start-ups extracted a few lessons: Have actual, peer-reviewed data and, like, don’t lie to investors. But the Theranos debacle didn’t stop their work. That game has been on since at least 2000, and doctors, patients, and insurers are still clamoring for those tests. Nominally they might reduce health care costs, but more than that they promise new, faster diagnoses and better care.

To be clear, Genalyte is no Theranos. Published papers and preliminary tests have validated the Maverick’s ability to test for a variety of signals, and the company is now evaluating its use in a handful of San Diego doctors’ offices. Theranos might not have been unique—overpromises and underdeliveries are as inimical to Silicon Valley as PowerPoint decks on laptops—but real diagnostics companies are making headway. “Theranos was the first time I had people with nothing to do with this industry telling me about it,” says Bruce Carlson, publisher of Kalorama Information, a health care and diagnostics market analysis company. “But none of my analysts considered it to be a real company.”

So what’s real? Well, as early as the start of the century there was Abbott, whose i-Stat device is now in a third of all US hospitals. It’s a handheld unit the size of a universal remote control; put a couple drops of blood onto a SD-card-like cartridge that fits into the unit and it’ll tell a physician or EMT whether someone with chest pain has, for example, elevated levels of a protein called troponin-I. Too high means you’re having a heart attack; low and it’s probably just gas. “You can run the blood and get results in 10 minutes,” says Narendra Soman, director of R&D for point-of-care diagnostics at Abbott. “That happens right at the patient’s side, as opposed to having to draw blood and send it to a lab.” i-Stat uses the electrical properties of its targets to get a reading, and other iterations can determine blood oxygenation and clotting ability.

The i-Stat remains the biggest player in what’s called point-of-care diagnostics. That’s home tests like for glucose or pregnancy, tests you might take at a pharmacy or clinic, and tests administered in hospitals. Even after two decades in service, i-Stat’s half-dozen or so possible tests still don’t come anywhere near matching the 1,000 or so tests a big lab can run. Though of course a big lab can’t do those tests in 10 minutes.

So what Theranos promised, and what dozens of companies are still chasing, is a greater number of blood tests on very small amounts of blood. Large, centralized labs like LabCorp and Quest use giant robotic systems, mostly working with 2 to 6 milliliter samples (about a sip, if that’s what you’re into). They can be expensive, but more than that they take days to produce a result—and when doctors order labs, people sometimes simply fail to go get them. Point-of-care on small volumes of blood could potentially solve that problem by doing the test right there in an office.

Could. “In order to do that, a bunch of things all along an analytical chain need innovations, all the way from collecting the sample to transferring a small quantity of blood into a high-performance analyzer,” says Eugene Chan, president of the DNA Medicine Institute. And once it’s in there, moving teeny tiny volumes of liquid—more prone to hinky concentrations of what you’re looking for and what you’re not—through teeny tiny channels or containers that surface tension wants to make all sticky, doing not just one but many kinds of analyses, ain’t easy.

If your company is trying to work with microsamples, it’s probably taking them from fingertips—but, as one good article about blood diagnostics points out, those capillary blood measurements can kind of stink. The number of red and white blood cells isn’t constant over the same volumes, and samples also include the guts of ruptured cells and “interstitial fluid,” the juice that’s between cells.

Chan has been working on this since at least 2014, when his DNA Medicine Institute won a $2.5 million X Prize competition to build a Star Trek-like “tricorder” analysis device. Their gadget puts 10 microliters of blood through a “spiral vortex micromixer” to separate out blood cells, and uses test strips that can read classic hematology—like CBC (“complete blood count”) and markers for hemophilia. The company has regulatory approval on one of its tests. “The next step would be the test together with the device for professional use,” Chan says. “The next hurdle is in the next two or three years. That’s the time frame that regulatory approval will happen.”

In the last decade, a recent report from Kalorama shows, the number of applications for approvals of molecular-based tests to the US government and the Europeans has risen. Devices that can download results directly to an electronic medical record are more common, and tests that use analytes other than blood—saliva, urine, or even breath—are coming on line. It was a $19.6 billion market in 2017, headed to $24.5 billion in 2022.

Theranos’ implosion revealed more obstacles, though. There’s a difference among tests someone does to themselves at home, tests that a non-specialist can conduct reliably, and tests that an expert (like a phlebotomist) has to run. People testing themselves might mess up, for one thing. Physicians might not trust POC results. And in addition to having enough data to convince investors, companies hoping to get into the business have to convince regulators—a somewhat confusing regime in the US that can mean getting approval from the Food and Drug Administration, but more often involves something called a Clinical Laboratory Improvement Amendments waiver. And that latter category, usually called CLIA, hasn’t expanded to include many of the newer tests, according to Kalorama.

Those test technologies are changing quickly. In 2015 Alere—now owned by Abbott—got a CLIA waiver for a test for influenza based on extracting genetic material from a nasopharyngeal swab (way, way up your nose). More molecular tests have followed, and as the Kalorama report notes, lots of researchers are working on the microfluidic problem of moving small volumes of liquid. That’s what’s behind all the cartridges, containers, and cards lots of diagnostics companies use. An article in Nature Bioscience last year listed a dozen small-sample technologies in development and in use, from Abbott’s electrochemistry to antibody-coated magnetic nanoparticles and a device that can literally do polymerase chain reaction on a chip, growing genetic material from a few drops of blood to detect Ebola, hepatitis C, and HIV.

So even though Theranos seems to have been microfluidic snake oil, the concept that made the company seem so magical actually looks more solid. “Theranos sparked the idea of decentralizing diagnosis,” says Genalyte’s Gunn. The company is just beginning its conversations with the FDA, and still working on a second round of funding. And the landscape has shifted. “People definitely ask us to see the data,” Gunn says. As they should.