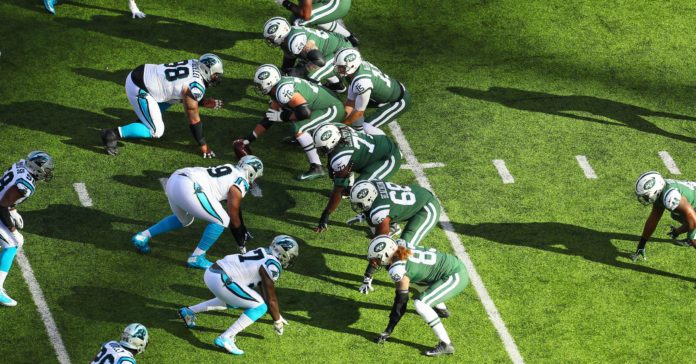 Since 2015, every player in the National Football League has been part cyborg. Well, kind of: Embedded in their shoulder pads is an RFID chip that can measure speed, distance traveled, acceleration, and deceleration. Those chips broadcast movement information, accurate to within six inches, to electronic receivers in every stadium. Even the balls carry chips.

So far, that data has stayed within the walls of each individual team, helping players and coaches understand offensive and defensive patterns. But this week, the NFL’s competition committee made good on its intention to share data on all 22 players after every game—with all the teams.

That move will give competitors a greater understanding of player movement across the league. But it could also begin to change the essence of the game. Much of the challenge of sports is the ability to quickly process and react to information, an instinctual gift of great coaches and players. By stripping away some of the uncertainty of competition, data will shift who holds that analytical advantage—and introduce some new ethical questions.

New information is always changing how the game is played, of course; coaches and sports scientists have been using GPS for over a decade to assess physical performance and the need for recovery. “Everyone is and will always look for an edge,” says Dave Anderson, former NFL wide receiver and co-founder of the Gains Group, a sports and technology consultancy. “In professional sports, where the difference between wins and losses are paper thin, any potential advantage should be taken seriously.” The question is what potential advantage should be considered rule-abiding—and what crosses the line.

For now, football has decided that collecting data—as well as applying intelligence and ingenuity to analyze it—is above board. What isn’t? Surreptitiously filming other team’s practices, hacking into scouting databases, and stealing signs with Apple watches. Oh, and deflating footballs.

“In sports, we want talent, dedication and effort to be difference makers, so how much do we want technology to decide the outcome of games?” asks Thomas Murray, president emeritus of the Hastings Center, a prominent ethics research center. “Taking the human element out of the game, making it a competition among scientists rather than athletes, does seem to undermine what we value in sport,” says Murray, who wrote about the ethics of performance enhancement in his book Good Sport.

That’s why the NFL competition committee, in an effort to level the playing field, has been conservative about the use of in-game technology. The league shuts off helmet radio communication from coach to quarterback 15 seconds before the play starts, for example, to prevent coaches giving instructions during actual play. Microsoft Surface tablets, given to teams as a replacement for paper images of offensive and defensive formations, are intentionally hobbled. The tablets only show photos—no video—and can’t access the internet. Similarly, computers can’t be used in the coaches box during the game.

“It’s a matter of balancing tradition and technology,” says Brian McCarthy, a spokesman for the NFL. “Some coaches and club personnel do not want to deploy further technology during the game and want the focus to be on the play on the field.” But those lines are always moving: According to McCarthy, the use of video on the Surface tablets might be one of the possible topics at this week’s NFL meeting in Orlando.

And now the RFID data release will become a reality. The NFL has hinted at the possibility of the new policy before; according to McCarthy, the decision to make the data widely available was finally made because the Committee felt all clubs could benefit from the information. But those benefits may take some time to realize.

According to Anderson, the data dump will probably be used at first to learn about the team’s own strengths and weaknesses. “Right now, teams barely scout themselves compared to their opponents,” says Anderson. “With this data you will be able to quickly spot and address your own outliers, tendencies, and issues in order to create a less predictable team.”

But eventually, the data could be used to formulate new strategies. “At some point every coach has to make an assumption about their opponent,” says Anderson. “Whether that be a certain type of leverage by a defensive end or certain play call based on down and distance, they can’t be 100 percent sure. Data should be used to try and reinforce or question those assumptions.”

Baseball, whose early embrace of analytics had its origins in the sabermetrics movement, has suffered through many of those growing pains already. Still, says Chris Capuano, a recently retired MLB pitcher, there are teams who use technology to help them make better, more data-driven decisions, and teams who hold fast to a more traditional way of doing things. But not for long.

“Ultimately, the beauty and simplicity of baseball means that the game will largely remain unchanged,” says Capuano, now a fellow at the MIT Sloan School of Management. “Except that athletes will train smarter, recover and perform better, and fans will enjoy a more immersive, rewarding experience.”

As data becomes increasingly open, though, leagues have to confront privacy risks. “Manufacturers, broadcasters, and leagues will have to address concerns regarding ownership, validity and interpretation of data, privacy, confidentially, security (hacking), and conflicts of interest,” says Sean Sansiveri, vice president of business and legal affairs for the NFL Players Association. Though football has yet to suffer a data breach that we know of, it’s already happened in baseball. Chris Correa, the former director of baseball development for the St. Louis Cardinals, is currently serving a prison sentence for stealing scouting information from the Houston Astros in 2015.

And players are apprehensive that biometric and performance data might be used against them—primarily during contract negotiations. Biometrics and RFID data could be used during employment decisions to insinuate that a player has lost a step. In a performance driven league, one into which younger (and cheaper) players are drafted every year, RFID data that highlights diminished acceleration or reaction time might cost a player when it comes time to keep a roster spot or negotiate a contract.

Though the NFL Players Association has yet to encounter a situation in which biometric data has been openly used in negotiations, they believe that players should be the guardians of their own health and performance data. To protect players from another risk—unreliable technology—an NFL team must first get consent from the union before using any new biometric device.

Uncertainty is why Anderson believes the RFID data will be more useful for team dynamics than understanding the movements of a single player. “Even with data at 12 frames a second it still doesn’t solve the issue of small sample sizes in football,” he says. “There is a limited amount of data on how a single player reacts during specific scenarios—for instance how a defensive back might react to inside routes on third and long.” Sansiveri agrees: “Whether information about player performance can accurately portray athleticism specific to football activity will of course depend on the data collection technology and the portrayal of resulting data.”

To understand the limitations, just look at how another sport has used its player tracking data. Last year, fans watched the heart rate of Queensland rugby player Johnathan Thurston, tracked by a matchbox-sized device full of inertial sensors, as he set up for a final kick to win game two of the State of Origin series.

His device measured speed, G-force, location, change of direction, and acceleration, relaying 600 data points per second—but all the fans got to see was Thurston’s heart rate drop from 168 to 161 as he prepared to kick. Thurston’s falling heart rate, perhaps an indicator of a steely calm, was a compelling hint at his physical and psychological state.

But what would coaches have done with Thurston’s data if he missed the kick? Criticize him for being too relaxed? The limitations of this transparent data means that its first—and most immediately valuable—use might be for the fans. It’s much easier to sell consumers on the entertainment value of seeing their favorite player’s metabolism up close and personal than to turn that data into real, actionable insights.

While acknowledging that the NFL fans won’t be seeing biometric data on their TV broadcasts anytime soon, Sansiveri concedes that change is coming. “I think it is safe to say that the future of fan engagement will incorporate some form of biometric data,” says Sansiveri. Want to see how fatigued your team’s quarterback is in the 4th quarter? The league has that information; it’s just waiting to put it on your screen.

The New Horizons probe buzzes the most distant object ever encountered...

GizmoCrazed - December 31, 2018 0
Four billion miles from Earth, the New Horizons probe that recently sent such lovely pictures of Pluto is drawing near to the most distant...