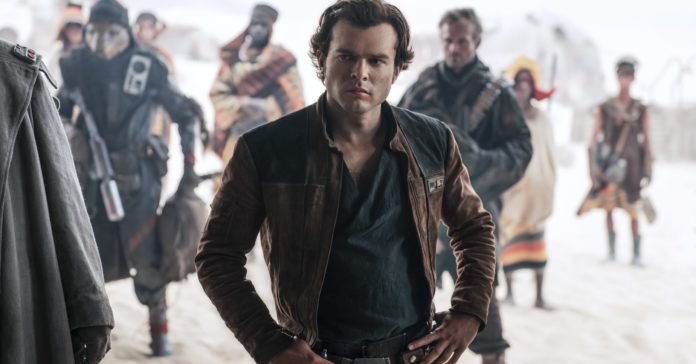 I make it my job to hunt through all the best trailers and find some cool physics thing to explore. In this case, it’s the trailer for Solo: A Star Wars Story—the Han Solo-led movie, scheduled to come out in May, that takes place some time before Episode IV: A New Hope. Right at the beginning, we see Han driving some type of speeder in a chase scene, taking a super-sharp turn with another speeder in pursuit. Here’s the interesting physics stuff: Notice how it looks like it is sliding around the curve? Why does it do that? Is that how you would actually drive a make-believe speeder?

To answer these questions, we need to think about the nature of forces. Suppose I push on some object at rest such that my push is the only significant force on that object. This could happen with a boat sitting in still water, a hockey puck on ice, or a small spacecraft out in deep space (don’t worry about how that object got into space). What does the object do? A common answer will be to say that the object moves. That’s not wrong, but “move” is not the best answer. With a constant a force, an object increases in speed—that is to say, it accelerates. Acceleration is a measure of the change in velocity of an object, so we could also say that a force changes an object’s velocity. That’s key.

There’s one more really important idea to understand—velocity is a vector. A vector is a quantity in which the direction matters (other vectors are: force, gravitational field, position). If a quantity doesn’t depend on direction, we call that a scalar (like time or mass or electric charge). Since forces change velocity and velocity depends on direction, this means that it takes a force to change the direction of a velocity. Or you could say it takes a force to turn Han Solo’s speeder.

How about a demonstration to show you how this works? Suppose I take a bowling ball and roll it along the floor (everyone should have a bowling ball handy for physics demos). This ball will essentially act like an object moving with a constant velocity since the frictional force is small. I want to make this ball change directions by hitting it with a stick. Which way should I hit it? Watch this.

Just to be clear, let me include this diagram showing the velocity of the ball and the direction of the force.

This sideways tap makes the ball change direction of its motion, but it doesn’t really change how fast it rolls. So really, you can break forces into two components. Forces in the same direction (or opposite) direction as the velocity either make it speed up or slow down. Forces that are perpendicular to the motion (sideways forces) make the object change direction. But you already knew that: When you swing a ball around on a string, it mostly moves at a constant speed but the sideways force from the string causes it to change direction and move in a circle.

Now back to Han Solo’s speeder. I’m not sure exactly how this vehicle drives, but I can make some assumptions (and you can’t stop me). First, it seems likely that those thrusters in the back of the speeder exert some type of force on it. Second, there has to be some significant frictional force pushing in the opposite direction of the speeder’s motion. f not, the thrust from the engines would just make that thing keep speeding up until it got to ludicrous speeds. My last assumption is that the speeder has to use these same rear thrusters for changing direction—unlike an Earth-bound automobile, which uses friction between the tires and the road to make a turn.

How about a breakdown of this slide turn from the trailer? I can’t really do a proper video analysis because of the camera angle, so instead I will just talk about it conceptually. Let me break down the motion into three moments as seen in the diagram below.

If you don’t like thinking about moving in circles, you have another option. How about this? In position 2 (above) notice that the speeder thrust is to the left and up. The left-pushing part of this thrust is in the opposite direction as the motion of the vehicle, so that it makes it reduce its right-moving speed. The up-pushing part speeds up the vehicle in the upward direction. In the end, this whole maneuver has to do two things: stop the vehicle moving to the right and speed up the vehicle moving upward (in the diagram). That’s why the thrust has to angle the way it does.

Homework: Yes, I do have one question for you to work on. Suppose this speeder is about the size and shape of a terrestrial car. In that case, you can estimate the thrust force needed to move it along at a constant velocity. Now that same force has to make make the car turn—but the turning force depends on the mass of the car (unlike driving forward which only depends on the shape). Use this to estimate the thrust to mass ratio for the speeder. Yes, I think this can be done. You might need to make some rough estimates of vehicle speed and turning radius.