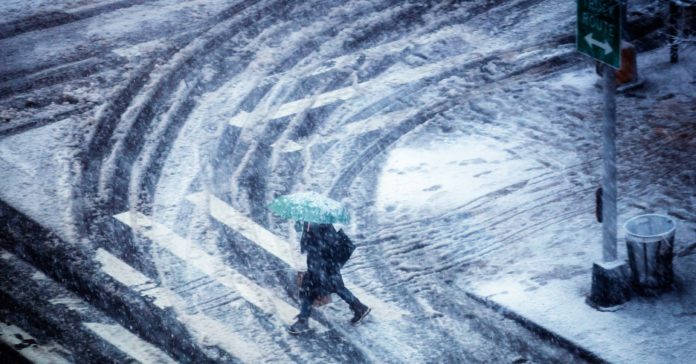 It’s that time of the year again, when massive winter storms lash the eastern United States and your uncle posts on Facebook about how it proves climate change is a hoax. After all, why would you still need a good coat on a warming planet?

The fallacy is, of course, that weather is not the same as climate—though the two are intertwined in sometimes surprising ways. And one controversial theory argues that weirdly enough, it’s a warming arctic that’s causing extreme winter weather in the eastern US. A new study out today in Nature Communications purports to bolster that argument, but the idea has sharply divided climate scientists. Arguing aside, though, the debate might be great for public understanding of climate change.

The researchers monitored temperatures in the arctic and compared them to what’s known as the Accumulated Winter Season Severity Index, which takes into account temperature and snowfall. Based on data from 12 cities, they found that when the arctic is warm, severe winter weather is two to four times more likely than when the arctic is cold.

That’s a bit odd, given that climate researchers have traditionally looked toward the tropics as a driver of global weather. “I think that’s kind of this engrained dogma in the field,” says MIT climatologist Judah Cohen, lead author of the paper. “There’s this maybe built in bias or prejudice that’s skeptical of the role of the arctic, and I think that’s played a big part in the controversy.”

Now, this was an observational analysis, because it’s not like the researchers could tweak temperatures in the arctic and see how that affected weather in the US. So while they could show a correlation between activities in the two regions, they couldn’t definitively demonstrate that a warming arctic is causing changes in weather down south. They admitted as much in the paper, but to help strengthen their argument, the researchers worked out a “lag correlation”: They looked at peaks in arctic temperatures and found that these anticipated severe weather by five days, which would suggest a link.

But not so fast, says climate scientist James Screen of the University of Exeter. In some of those locations, there doesn’t appear to be any lag, and in others the indication seems to be weak. “It’s better than nothing, I guess, but it doesn’t convince me,” Screen says.

Again, just because two things are correlated doesn’t mean they’re playing off each other. “It could be that the arctic circulation and the US circulation are changing simultaneously, and there’s just a bit of a lag between the changes in the circulation and this weather index,” Screen adds. “I would say it’s suggestive, but it doesn’t totally convince me.”

But say a warming arctic is responsible for wacky winter weather in the United States. What could be driving it? One theory points to the jet stream. The arctic is of course cold, and the lands to the south of it are less so. “That temperature difference between the cold arctic and the area farther south is one of the sources of energy that drives the winds of the jet stream,” says Rutgers University climatologist Jennifer Francis, a co-author on the paper.

The problem is, the arctic is warming faster than the rest of the planet, known as arctic amplification. The contrast between cold air and warmer air, then, is getting less extreme, which would decrease the energy of the jet stream. “What we see typically when the jet stream is slow is that it tends to take these bigger meanders north and south,” says Francis. “When it does that, say it dips way south over Florida, for example, then it allows the cold air from the arctic to plunge much farther south.”

But what if it’s actually the other way around? What if the eastern US is actually influencing the arctic? “You can’t even say which is the cause of which,” says climate scientist Ted Shepherd of the University of Reading. “Is it the warm causing the cold or is it the cold causing the warm? They’re just two sides to the same coin.”

To answer that question, climate scientists would need to simulate massively complex processes. Researchers can do this long-term to parse various happenings with the climate, or on a smaller scale with weather, like TV forecasters have been doing all these years. But you can’t run a weather model for very long—it’s just too computationally expensive.

“We can’t really run a weather model on climate time scales, so there are some approaches to try to embed a weather model within a climate model,” says Shepherd. The work isn’t definitive, though. “In the absence of that, we’re stuck with climate models that don’t really simulate the weather regimes very well,” he says.

But with every study, climate scientists are better understanding how a warming planet may lead to profound and sometimes counterintuitive changes. Which is why your uncle might be confused. “I think one of the silver linings on this bad news cloud is that the bizarre weather that we’ve been having has really gotten the public’s attention,” says Francis. “We’ve been able to tell a real story, a science story, about why people are experiencing this bizarre weather now and connecting it to climate change.”

Shepherd may not agree with the conclusions of this new study, but he sees a similar bigger picture in climate influencing weather. “It’s a great story actually in a way,” he says, “because you can be very honest about it and raise a lot of the open questions and people might actually find it fascinating … I would hope.”

Scientists disagreeing over the link between the arctic and extreme weather in the US doesn’t mean scientists disagree about the existence of climate change. They don’t. Researchers arguing about this complex problem is science doing what it does best: ferreting out the truth by way of disagreement, ideally not of the icy variety. Never hurts to bring a coat, though, just in case.

GizmoCrazed - June 24, 2018 0
Early on in the study of quantum computers, computer scientists posed a question whose answer, they knew, would reveal something deep about the power...

The New Google+ – Should You Take A Chance On It?

Beyond Cas9: 4 Ways to Edit DNA