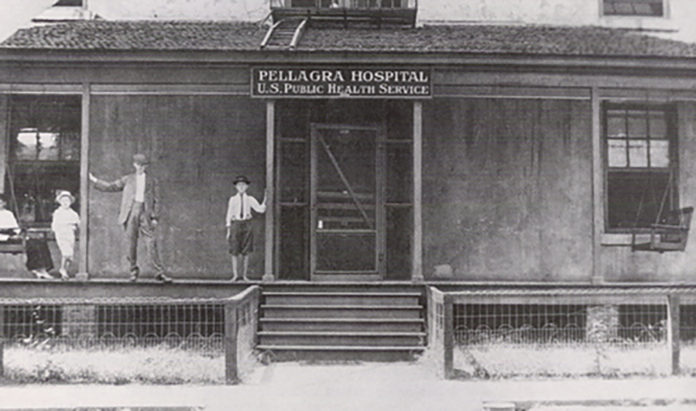 To test his diet theory, Goldberger supplied what he called “a diet such as that enjoyed by well-to-do people” — meat, milk and vegetables — to two Mississippi orphanages and an asylum. Pellagra rates there plummeted. His next quest: to induce pellagra in healthy subjects. In 1915, with pardons in hand from Mississippi’s progressive governor, Goldberger recruited 12 healthy volunteers at the Rankin State Prison Farm to eat the three Ms diet. Within the six-month trial period, six volunteers exhibited the telltale dermatitis. Goldberger was convinced he had proven the link between the Southern poverty diet and pellagra.

To bolster his case against the germ theorists, in 1916 Goldberger conducted what he called filth parties. He tried to infect himself, his wife and other volunteers with pellagra by injecting and ingesting the skin scales, urine, feces, blood and saliva from pellagra patients. No one got pellagra. He also organized extensive epidemiological studies of seven villages that conclusively proved the link between pellagra and poverty. The studies are still used in medical schools today and hailed for their thorough, groundbreaking analysis of where economics, social conditions and health intersect.

Yet pellagra raged on, propelled by plummeting cotton prices in 1920. Goldberger advocated for food aid for the South, to mitigate what the PHS called a “veritable famine” developing in the Cotton Belt due to poor farmers’ diets. Southern politicians and businessmen railed against the recommendation, which they perceived as an attack on their honor. “Goldberger didn’t understand Southern pride,” Kraut says. “His mission was to conquer the suffering and solve the medical mystery.” He still had a ways to go.

Goldberger focused on identifying the missing dietary element, which he called the P-P factor, for pellagra preventive. In 1922, he tried to induce black-tongue disease — the canine analog of pellagra — in his laboratory dogs by feeding them a diet typical of poor Southerners, plus brewer’s yeast purely to stimulate the dogs’ appetite. The dogs remained healthy, prompting suspicion. Without the yeast, the dogs developed pellagra. Repeated testing on the dogs, then on human subjects, confirmed that brewer’s yeast, a product the poor could afford, contained the P-P factor that cured and prevented pellagra.

Goldberger was finally publicly vindicated in 1927. That spring, the Mississippi River flooded, to devastating effect. The potential for a widespread pellagra outbreak surged in flood-ravaged areas of Tennessee, Arkansas, Louisiana and Mississippi. Goldberger oversaw the Red Cross’ distribution of 12,000 pounds of brewer’s yeast in those areas. That effort cured most pellagrins within six to 10 weeks, prevented untold thousands more cases and earned Goldberger the recognition that was long overdue — though he wouldn’t enjoy it for long.

Goldberger died in 1929, the same year that pellagra cases at large started declining. The Red Cross carried on his work; by 1937 it had distributed 500,000 pounds of brewer’s yeast — frequently referred to as Vitamin G for Goldberger. That year, researchers identified niacin (abundant in brewer’s yeast) as the elusive P-P factor, and doctors established a standard dosage and therapy. Niacin has since become a dietary staple, now better known for fighting high cholesterol than pellagra.

Today, pellagra is mostly relegated to history lessons and medical reference books. But occasionally, such as during isolated outbreaks in a refugee crisis, the world receives a vivid reminder of how the disease still affects people. And as Tissier saw in her hamsters, it’s also a lesson anyone caring for animals should keep in mind. This scourge is not gone, just largely forgotten.

GizmoCrazed - October 4, 2011 0
AppleCare gives the insurance for your ever-precious iPhone by providing repairs for damages caused due to company faults for an additional year and also...