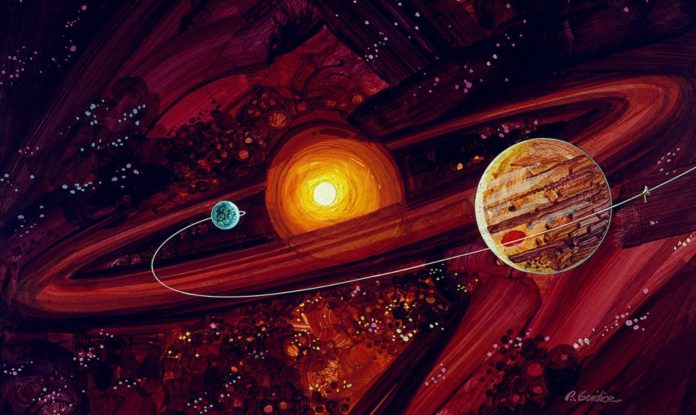 The Pioneer 10 spacecraft fully lived up to its name, blazing a trail to the outer solar system and proving that the asteroid belt was no obstacle to space exploration. (Credit: NASA=Ames/Rick Guidice)

This month marks the 45th anniversary of Pioneer 10’s passage through the asteroid belt. It was a key rite of passage in humanity’s journey from this blue planet into the deep reaches of outer space. Unlike the crowded swarms of science-fiction movies, the real asteroid belt is overwhelmingly empty space. Still, nobody knew exactly what to expect. Would Pioneer 10 be pelted with dust-speck micrometeoroids? Was the asteroid belt a serious barrier to exploration?

As it turned out, the dust was even less than expected. Pioneer 10 (and the many other probes that followed) sailed through unscathed. The solar system was wide open, waiting for us.

I was thinking about Pioneer 10 this past week as I contemplated another cosmic frontier. Standing on a beach in the Yucatan, I was far enough south to see the nearest star system, Alpha Centauri, glittering on the horizon. Bright. Beckoning. Waiting for us. Almost impossibly far away–but only almost. It is our human nature to explore, and I believe that it is our human destiny to find a way to the stars.

True, the distances to the stars are vast. In all those years of travel, Pioneer 10 has still covered only about 1/2,000th the distance to Alpha Centauri. But as I’ve noted before in this blog, there are realistic ways that we could reduce the travel time down to a single human lifetime, using only realistic technology–no warp drives required.

It is also important to recognize that the journey to the stars is not something that needs to happen in a single leap. Realistically, it can’t happen that way. Just as Pioneer 10 opened the path to the Voyager probes, and to New Horizons, and to the first tentative forays into interstellar space, so will the grander journey to the stars will take place across multiple stepping stones. There will be intermediate technologies and intermediate destinations–many of them.

Where might we go? The natural place to start is where our current probes have left off, in the outer solar system. Voyager 2 provided only the most cursory snapshots of the Uranus and Neptune systems. We have much more to learn there.

The Kuiper Belt is almost entirely unexplored territory–the solar system’s third zone. New Horizons sent back spellbinding images and data on the most famous residents of the Kuiper Belt, Pluto and its giant moon Charon. On New Year’s Eve of this year, New Horizons will study another, much smaller object, currently known only as 2014 MU69.

But the Kuiper Belt is also home to thousands of other sizable objects, including several dwarf planets. One of them, Eris, is nearly as large as Pluto, and even more massive. These objects preserve a record of the very early solar system, including the dynamic processes that caused the planets to settle into their current orbits. Those processes also explain why Earth is a wet, habitable world.

Beyond the Kuiper Belt may lie the long-sought Planet 9. If it really exists, it is probably tens of times as far away from the Sun as Pluto is. High-speed travel will be crucial if we want to explore it up close. Farther out still is the Oort Cloud, a flock of frozen objects ejected from the inner reaches of the solar system billions of years ago. Occasionally something from the Oort Cloud falls Sunward and we see it as a comet. Everything else out there is a mystery.

One of the most intriguing destinations out toward the Oort Cloud is not an object but a conceptual location, the “solar gravity lens” point. Bear with me for a second, because this one is weird but truly wondrous.

The gravitational field of the Sun subtly warps the space around it, following the rules of Einstein’s general theory of relativity. At a great distance from the Sun, the warped light rays come together, just like the focal point of a magnifying lens. If you are standing at that point and you look back at the Sun, you see a greatly magnified version of whatever is on the other side–again, just like a magnifying lens.

A new study funded by NASA Innovative Advanced Concepts (NIAC) demonstrates the astonishing sights available to a space telescope placed at the solar gravity lens point. So far, astronomers have observed only a handful of planets directly, and these are seen merely as unresolved dots; most are detected only indirectly. But using the Sun’s magnifying power, a properly sited space telescope could scan the surface of an Earthlike planet 100 light years away at a resolution of about 1 kilometer!

Schematic of how to image an Earthlike planet using the Sun as a gravitational lens. A space telescope would travel to the solar gravitational lens point, where the planet would appear magnified and distorted into a ring. The telescope would navigate along that ring, reconstructing a picture of the planet pixel by pixel. (Credit: DeLuca/Turyshev et al)

That is precise enough to resolve lakes, mountain ranges, cloud patterns, and even–if you want to push speculation to the limits–the outlines of alien cities.

Tapping into the magnifying power of the Sun requires moving out at least 550 times as far away from the Sun as the Earth is (a distance of 550 astronomical units, or AU, in scientific parlance). The authors of the NIAC study, led by Slava Turyshev of the Jet Propulsion Laboratory, acknowledge that transportation alone will require huge technological advances. They suggest that getting there in 30 years might be possible using enormous solar sails or daring Sun-diving acceleration maneuvers.

Undaunted, the authors also posit an even faster journey, in as little as three years, using nuclear-ion propulsion or kilometer-scale solar sails. Laser-sail propulsion, along the lines proposed by the Breakthrough Starshot initiative, could be faster still.

Transportation will hardly be the only challenge. We will also need to figure out how to miniaturize the optics and electronics; navigate and maneuver precisely; maintain clear communications from a tremendous distance; and keep all the systems healthy for many years in a harsh interstellar environment.

Here, too, the answers will not come all at once. They will develop incrementally and unsteadily, but if we set clear long-term goals we are far more likely to end up finding them. The interim possibilities are tantalizing as we progress along that path. A propulsion system that could reach the solar gravity lens point in 3 years could reach Uranus and Neptune in a matter of weeks.

Imagine fleets of test probes blowing through the outer solar system. Early versions might not even have the ability to decelerate. They might fly past their targets at tremendous speeds, racing to grab useful data before floating away into the galaxy. Ultra-high-speed imaging will require its own set of innovations, ones that could be very useful for gathering useful intelligence during a full-blown mission to Alpha Centauri…someday.

Oh, the things we’ll learn along the way. We will at last be padding away from shore, off into the cosmic sea.

GizmoCrazed - October 4, 2017 1
Brains, beyond their signature achievements in thinking and problem solving, are paragons of energy efficiency. The human brain’s power consumption resembles that of a...