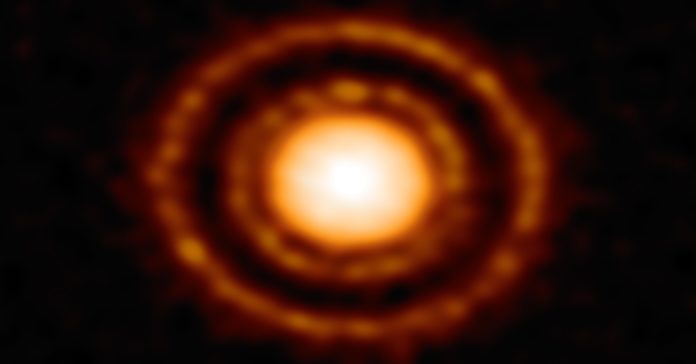 Strap in, because this week’s lineup takes us around our solar system and far out into the universe. We’re going to linger at a young star called AS 209. A member of a young star forming region called Ophiuchus, this baby planet currently has a proto-planetary disc around it: a ring of dust and gas, left over from star formation, that eventually forms into planets. As each speck gathers more and more material, it can grow into a rocky planet like our own, become enveloped in thick clouds like Venus, or even grow into a gas giant like Jupiter or Saturn.

After observing this star using the ALMA telescopes in Chile, scientists found several gaps around the star, spaces carved out by the newly-forming planets. In particular, a very large gap is actively being carved out by a planet the size of Saturn. What’s strange though, is that this massive planet is growing very far away from its star, some three times the distance between our sun and Neptune. This discovery is challenging what scientists know about planetary formation; no doubt they’ll keep spying on AS 209 to see what happens next.

Still not ready to leave space? Check out the full cosmic collection here.

GizmoCrazed - September 1, 2018 0
Yes I am very late to this. But I am also very annoyed so I am adding my voice to the now sustained chorus...

Why your startup shouldn’t rush to $1 million in revenue