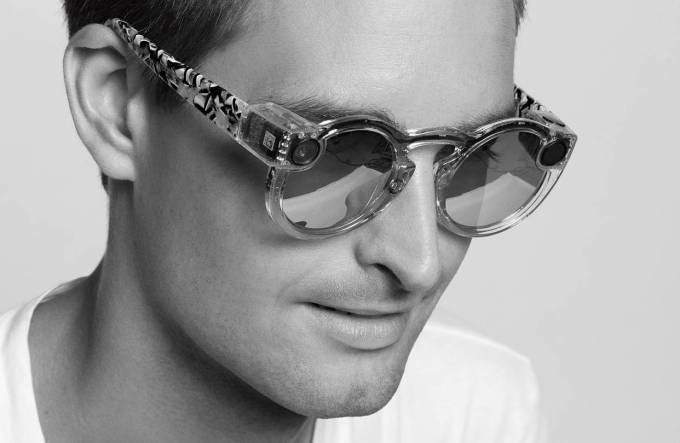 “Timing,” Snapchat CEO Evan Spiegel said cryptically when asked what the greatest threat was for Snap Inc. “I think the big risks are always the really big product ideas that we’re investing in that are just hard to get right,” he told the Goldman Sachs conference two weeks ago.

The statements got lost amongst flashier quotes. He defended the Snapchat redesign, saying “Even the complaints we’re seeing reinforce the philosophy,” and described Snap’s office atmosphere as “just below the boil… Like when you heat water, and it’s really fucking hot, but it’s just below the boil.”

Yet it’s his thoughts on “timing” that give us the deepest insight into Snapchat’s toughest problem: overcoming reality.

“I think if we look at the future, there’s a lot of different components to what we’re trying to accomplish and timing is an important one of those — especially in the technology business, both in terms of consumers’ willingness to try new products, but also in terms of technological development and what that can power in a set amount of time [editor’s note: emphasis by the author]. As I’m looking at the next decade, big products that we’re trying to develop, I think timing is a funny thing. That’s probably what I’ll have my eye on as we just continue to try to develop products, and we’re willing to wait to get ’em right but that’s probably the risk [editor’s note: emphasis by the author].”

For Snap, no idea is bigger than building augmented reality glasses that pack world-morphing features into a stylish form factor. I believe this is what Spiegel was hinting at. He knows Snap is mired in an uncanny valley between the lackluster truth of today’s augmented reality hardware and the desirable AR gadgets that are years beyond our current engineering prowess.

The fact is that no one has been able to build this. Google Glass flopped with consumers and pivoted to the enterprise. Magic Leap’s bulky headset requires a backpack or beltpack to power it, and is still just a rendering. Facebook has nothing to show and Apple has kept secret anything it’s tinkering with. Intel’s Vaunt glasses are perhaps the closest — small and stylish, but merely delivering text notifications and directions projected onto your retina.

We’re still a long way from compact AR glasses that can overlay virtual objects onto the real world the way Snapchat’s smartphone app does. Perhaps years. And that’s the “timing” risk Spiegel described. Snap might be willing to wait, or more accurately, forced to wait. But the public markets might not be so patient, and bigger, better funded hardware-first companies are racing for the prize.

Just how slow Snapchat is inching toward the goal was revealed yesterday by Alex Heath of Cheddar’s stellar scoop on the future of Snap Spectacles. He reports that Snap is preparing to launch v2 of Spectacles later this year and v3 in 2019. But they won’t deliver on the fever dream of AR glasses that seamlessly alter our lives. 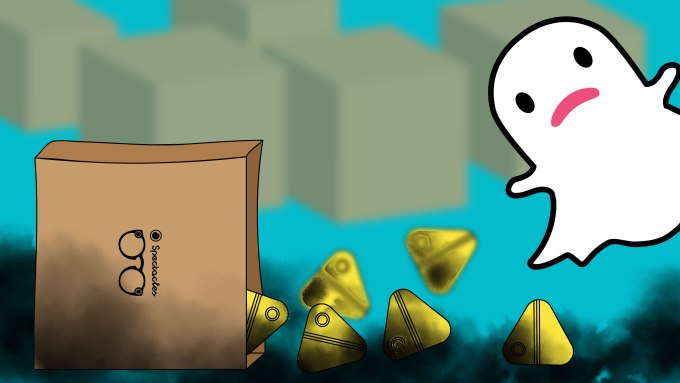 V1 of Spectacles emerged in Fall 2016 with a way to record circular first-person video from a camera built into the frame. But getting the videos off the glasses and into your phone in high-resolution proved a buggy hassle. Despite a hyped launch with lines outside its Snap Bot vending machines in surprise locations, their utility was limited.

Word of a new version of Spectacles might surprise some. Leaked data showed less than half of owners kept using them after a month, with many ditching Spectacles after just a week. The best camera is the one you have with you. But between recharging via proprietary cable, their fragility and their bulky triangular case, people rarely had their Spectacles when they needed them. Snap only sold about 150,000 pairs, with hundreds of thousands lying unsold in warehouses, and it registered a $40 million write-off on the hardware business.

After two years of improvements, Spectacles v2 will reportedly be…water resistant, available in new colors and have fewer bugs. That’s little progress in a long time. And the launch has already missed internal deadlines.

V3 is due in 2019, and is supposed to be a little more ambitious, with two cameras to add 3D depth effects to the videos they record. But that’s still a far cry from us digitally hallucinating a dancing hot dog through Spectacles themselves. 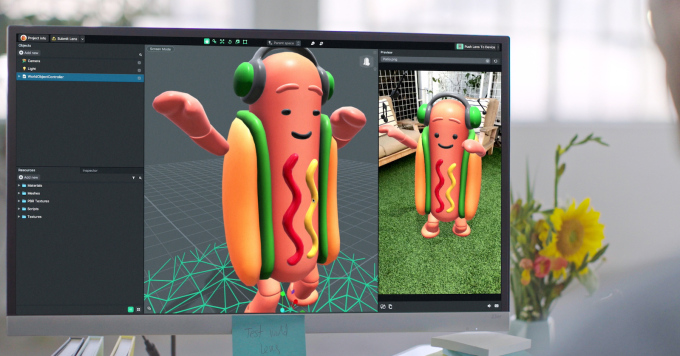 This all brings the “timing” problem into focus. Snapchat claims to be a “camera company” but doesn’t make smartphones, which everyone uses as cameras. It’s done plenty with just software, bringing augmented reality to the masses through puppy ears and rainbow puke. Still, the world is waiting for AR glasses, and Snap can’t make them yet.

What it has built, and what’s on its now-revealed road map for the next two years, doesn’t cut it. The concept known as the “uncanny valley” explains our revulsion to humanoid objects such as androids, life-like dolls and 3D animations that don’t convincingly appear human. You’d expect that the more human-esque something looks, the more warmly we’d receive it. But in fact our positive perception drops into a valley until something reaches a high threshold of accuracy in mimicking humans.

I believe Snapchat is stuck in the uncanny valley of AR glasses. At the start of the spectrum are our smartphones. They can produce somewhat convincing augmented reality… as long as you suspend your disbelief triggered by holding your phone in front of your face. At the far end are the AR glasses we imagine, which look just like normal glasses, or even contact lenses, but that can overlay convincing AR objects on our view such that we can’t tell they’re not real.

In the middle are Snapchat Spectacles, with all the stigma attached. Beyond shooting circular video from the first-person perspective, they’re arguably much worse cameras than our phones. Poor resolution, limited battery life, video-only, tough to export from, can’t take selfies and they lack the auto-stabilized swiveling gimbals that are our hands.

And from a form factor standpoint, they’re obtrusive, literally putting a barrier between us and everyone else, while scaring them that we might be recording. Unless they elevate you to having technological super-powers, which they don’t, they inhibit your ability to interact with humanity. If you wear Spectacles, you might get called a glasshole. Meanwhile, your phone is always with you, but resides humbly in your pocket or purse. 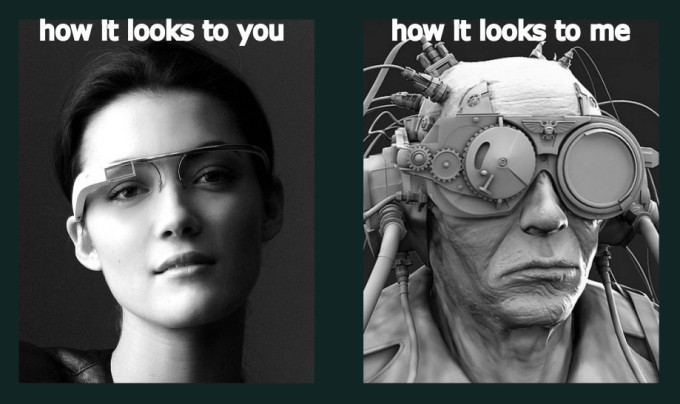 As described, Spectacles v2 and v3 won’t change this equation. That’s why I’d be surprised if they sell well enough to become a serious hardware business for Snap, or deliver enough unique content to boost Snapchat usage. 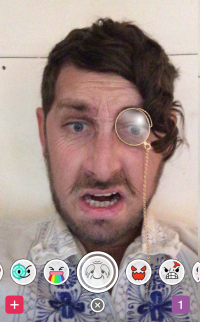 The company’s irreverent brand and roguish design aesthetic let it get away with unpolished products that would never meet Apple’s standards. Still, Snap will likely have to spend years and billions of dollars to get to a v5 or v6 of Spectacles that are able to claw their way out of the uncanny valley. It may be running short on both time and money.

Snap lost $350 million last quarter and $3.5 billion in 2017. It’s got just $2 billion in cash and securities in the bank. Facebook is waging total war on Snapchat, cloning its features, blocking its user growth and jockeying for its vertical video ad dollars. By the time Snap gets to viable AR Spectacles, the company founded in 2011 could be 10 years old and starting to lose its luster with the next generation of teens. And each day, Apple, Google or another hardware giant gets closer to launching their own market-defining glasses.

Snapchat is and has always been in Spiegel’s hands, between his voting rights and product instincts. If he’s compelled to bet Snap’s future on AR glasses, no one can dissuade him. But the timeline of pure technological progress is one thing beyond the CEO’s control. As I wrote when assessing the potential of Snap’s IPO, it all comes down to “do you believe in Evan Spiegel?” When he says “timing” is the company’s biggest risk, expect that Snap could spend an excruciatingly long sentence locked in the valley.