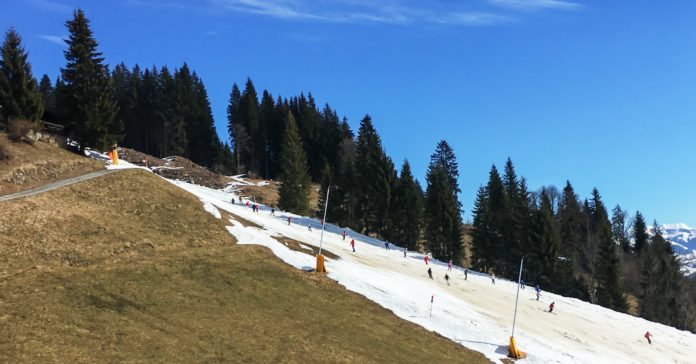 After a wimpy winter, spring break has arrived, and skiers and snowboarders from Maine to Mammoth Lakes are stoked. More than 18 feet of snow has dropped at Squaw Valley, Calif., in March; Utah’s famed powder resorts have finally broken the 100-inch mark; and New England has been pummeled by four big storms pushing closing dates to late April.

At the same time, there are warning signs about the future of the sport. Climate change has already made winters warmer and shorter, while a March study by researchers at Oregon State University found North America’s snowpack has declined up to 30 percent in the past century. By 2050, climate change will cut ski resort winter seasons by 50 percent, with the hardest-hit in the Pacific Northwest, Southwest, and Upper Midwest, according to a 2016 study by the University of Colorado, the Environmental Protection Agency, and consulting firm Abt Associates.

Mountain snow isn’t just important for shredding; it also provides drinking water for urban dwellers and irrigates farmers’ fields. Those issues are front of mind for many municipalities, but after years of inaction, the ski industry itself is starting to take climate change seriously. Resorts are deploying new snow-making technology to adapt to unpredictable conditions, reducing the energy skiers use to get up the slopes, and even trying to alter customers’ habits.

“Our snowpack has decreased, but I don’t think it’s going to disappear,” says Maura Olivos, sustainability coordinator at Utah’s Alta, which opened 80 years ago. In the future, Olivos says skiers might not be floating on as much fluffy pow. “There will be less powdery snow and more dense snow,” Olivos says. “Our skier expectations may have to change so they are not anticipating powder every time they come here. We are going to have to be appreciative of what we get.”

But that shift might not be easy. For generations of skiers, Alta’s calling card has been fluffy powder. Tons of it. Skiers flock to big open bowls like the Ballroom or tree-lined ridges like High Traverse because the snow is forgiving and the turns are steep, soft, and fun. Alta and its neighboring resorts of the Wasatch Range receive powder snow because of the drying effect of the nearby Great Salt Lake on moisture-laden storms moving west from the Pacific Ocean. Alta’s snow has an average moisture content of 8.4 percent, compared to the 12 percent average US snow, or man-made snow’s 24 to 28 percent.

Until recently, Alta and other western resorts didn’t have to rely on snowmaking. But that’s changed. The resort has doubled its capacity in the past decade, although it finishes snowmaking by January, Olivos says. The resort paints snowmaking machines and water lines in camouflage colors to hide them from customers who are expecting a verdant scene of spruce trees and white powder in the winter, or wildflowers in the summer.

On the other side of Baldy Mountain from Alta lies Snowbird, a resort that boasts of one of the longest ski seasons in North America. But this year, for the first time, it opened and then closed again in November after temperatures hit 55 degrees.

When Jonathan Tadje started work as a snowmaking maintenance technician at Snowbird 10 years ago, he had to turn the valves manually when it reached right temperature (usually 28 degrees). “When the temperature dropped, we sent more water to the snow guns,” Tadje says. “We hiked up, or rode snowmobiles or trucks with chains. That was a big part of the adventure. It was all a manual process.” Now, each gun has its individual weather station with temperature, humidity, and pressure sensors that adjust to changing condition; they automatically feed in just enough water at the right time. Automated snowmaking uses less electricity, and less water, which is a precious resource in Utah.

Tadje thinks customers are getting used to manmade snow and the work he does. “At first, they didn’t like the quality,” he says. “Some seasons we just opened with manmade snow. But we always got appreciation when Mother Nature was running behind.”

In California’s Sierra Mountains, snowmaking has gone big-time, just as the region’s resorts have rebounded from a devastating five-year drought that ended in 2017. Squaw Valley spent $10 million on new snowmaking machines that adjust pressure and water volume several times a second, according to president and chief operating officer Andy Wirth. “We produce 40 percent more snow per gallon of water than we did five years ago,” says Wirth.

But unpredictable winters can still leave resorts reeling. This season, Squaw got almost no natural snow from December to February. Then came a series of big storms that are threatening the all-time record of 212 inches for March. The boom-and-bust cycle of snow in the Sierras has caused Wirth big headaches. Without much natural snow, Squaw had to rely more on man-made snow—which is usually used to cover the base trails, not the steep slopes that skiers and boarders crave. Ideally the season would progress bit-by-bit, spreading out the powder days and the crowds. But big dumps of snow all at once can make travel difficult, and make ski vacations difficult to plan ahead of time.

And it’s not just low snowpack that causes trouble. In 2011, high winds and snowstorms in the area knocked out power and forced some re-thinking. Wirth, along with his local utility, came up with a solution that combines microgrid of wind and solar power, along with Tesla battery storage for 8 megawatts of backup power for the resort and nearby community. The resort expects to operate on 100 percent renewable power by December 2018, says Wirth.

For Wirth, climate change is real, but it doesn’t mean that his industry is going kaput. “The good news is that skiing is going to be great in 2030,” he says. “We will continue to lose the polar ice caps and I have great concern about the health of the environment and our society. We know that volatile weather will increase, but that we can invest in our business and develop our product and alternatively, we can reduce our carbon footprint.”

For 27 year-old ski instructor Bo Stevens, climate change isn’t top of mind. He says he doesn’t have time to do the research, but some things have bugged him about the past few seasons. “It seems that we’ve been getting some very warm winters,” says Stevens, who moved to Utah from Nashville to ski. “When you get 50 degree temperatures at 8,000 feet, it’s very weird.”

I talked to Stevens on the ski bus from Snowbird to Salt Lake City about 45 minutes away. He gets a pass from Snowbird, while 54,000 tourists get a combination ski/bus pass each winter for the resorts near Salt Lake City. Business leaders and resorts have made a big push to get skiers out of their cars to ease traffic, cut air pollution, and reduce the ski industry’s carbon footprint. The transit push is also helping put a dent, albeit a small one, in the notorious smog that often blankets the Salt Lake basin.

“The ski industry has not found a good narrative for our own responsibility for driving demand,” says Scott Beck, CEO of Visit Salt Lake. He says that the ski resorts and the travel industry generate a big carbon footprint, with folks flying in to take advantage of Utah’s amazing snow conditions, but they also are taking steps to reduce it.

Beck says the region is considering the idea of tolls for cars with fewer than three passengers on the canyon roads that serve the resorts near Salt Lake City. There are also more financial incentives for seasonal workers. Snowbird, for example, is offering employee carpoolers free reusable water pouches every five rides, a transferable half-price lift ticket for every 10 rides and chance to ski on a closed run with friends.

These restrictions and higher costs might push some skiers and boarders away, but most winter enthusiasts are used to unpredictable weather and crappy snow, as long as they can dream of waking up to an early morning powder day. Climate change might make that dream less attainable, but most won’t give it up.

Your Kid’s Boss Will be a Robot

GizmoCrazed - January 29, 2016 0
Automation in processes is the name of the game.  With each passing day, robots get better and smarter than ever before. This is not surprising given the rate...

This Is What You Get When You Pour Tons of Concrete...

Make Folders Inside The Settings App Of Your iPhone With Preference...