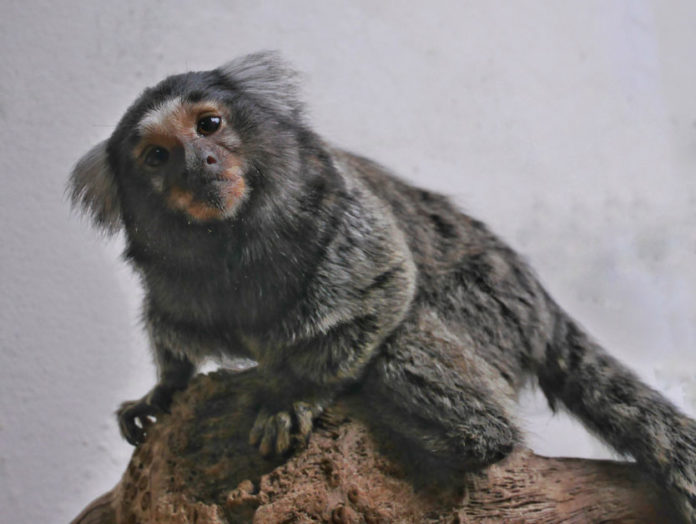 In a 1973 study, scientists at the University of Chicago fitted cocaine-dependent rhesus monkeys with stainless steel catheter harnesses, allowing them to self-administer PCP to until they were “highly intoxicated.”

This type of research isn’t exactly unusual — for decades, humans have been pumping primates full of psychedelics like LSD and DMT to study the effects of hallucinogenic drugs.

But in a recent first, researchers at the Federal University of Rio Grande do Norte in Brazil gave ayahuasca, a potent entheogenic brew from the Amazon Basin, to common marmosets. Ayahuasca has been studied in rodents and humans before, but not non-human primates. And strangely — or not-so-strangely, depending on who you ask — the drug seemed to help the monkeys’ depression.

These days, ayahuasca is often conflated with kale-crunchers in San Francisco or New York who join shaman-led, soul-searching group therapy sessions with plenty of vomiting—the drink can cause great gastrointestinal distress.

But its use dates back hundreds of years among Amazonian tribes, and according to one study, regular ayahuasca users “performed better in neuropsychological tests, scored higher in spirituality and showed better psychosocial adaptation.” Ayahuasca has been shown to be generally safe and non-addictive, illuminating well-being with fast-acting anti-depressive effects in just one dose.

Despite a recent study in The Lancet, which showed that 21 antidepressants work better than placebo, we need better treatments for depression. About a third of people still don’t respond to treatment, while it can take weeks for a drug to begin working. For the majority, reaching full remission is unobtainable.

This is why researchers are looking to classic psychedelics — including ketamine and psilocybin— to see if they hold greater promise. And with the case of the marmosets, ayahuasca did rapidly reduce depression symptoms.

So how do you depress a monkey? Well, similar to humans, marmosets are social primates, so the researchers simply isolated them for eight weeks in cages where they could still hear and smell their colony members. This disruption in social relationships caused the juvenile monkeys — eight males and seven females — to exhibit stress behaviors, such as excessive sleepiness, scratching and grooming, while also losing weight and eating less. Researchers also measured cortisol, a hormone that regulates stress, by sampling the marmosets’ feces.

“After the ingestion of ayahuasca we observed the stress behavior reduced,” says Nicole Galvão-Coelho, the study’s lead author. “Ayahuasca regulated the cortisol levels to that similar to the family groups.”

Within 24 hours, the monkeys’ began to eat more, they stopped scratching, and later, their weight returned to baseline levels. Galvão-Coelho’s team compared these results with a previous study they designed using isolated, depressed marmosets that were given nortriptyline, a tricyclic antidepressant. In this case, the ayahuasca produced faster, better results.

A lot is going on in ayahuasca, which has two main ingredients. The first, Psychotria viridis, is a perennial shrub called chacruna that contains N,N-Dimethyltryptamine, or DMT, the so-called “Spirit Molecule.” An incredibly powerful psychedelic, DMT binds to the serotonin receptor 5-HT2A, as well as the sigma-1 receptor, both of which have been shown to impact depression regulation.

But DMT is not active orally, so that’s where the second ingredient comes in. Banisteriopsis caapi is a vine that contains tetrahydroharmine, harmine, and harmaline, β-carbolinic alkaloids which are monoamine oxidase inhibitors. MAOIs not only work as antidepressants, they prevent DMT from breaking down in the digestive tract, making it psychoactive for ten hours or more. Tetrahydroharmine is also a weak selective serotonin reuptake inhibitor, another class of antidepressant drug.

In other words, ayahuasca is a soup of different chemicals uniquely acting on multiple depression pathways. Neuroscience researcher Amanda Feilding says these results are expected and consistent with her research. In 1998, she founded the Beckley Foundation, a United Kingdom-based think tank dedicated to investigating psychedelics as medicine, including ayahuasca.

“It definitely has been shown to help lift depression and leave a long afterglow, which can go on for weeks or months. People score higher on tests of mindfulness, optimism, openness, after ayahuasca,” Feilding says. “I think the slight un-recreationalness [sic] of it suits the puritanical mode of the times, because no one can accuse it of being a party drug. I think it has great healing potential, as indeed, to a certain degree, is shown by this research.”

A 2017 study funded by Beckley showed that ayahuasca compounds can promote the birth of new brain cells, or neurogenesis, in petri dishes. We’ll know if the same effect happens in vivo soon. That’s because it wasn’t a happy ending for all the ayahuasca marmosets. Galvão-Coelho says some were returned to their family groups, but others were “sacrificed,” as she put it, to study changes in the prefrontal cortex and the hippocampus after consuming ayahuasca.

Whatever further research on ayahuasca brings, it will almost certainly be interesting.

Talk all things robotics and AI with TechCrunch writers

Snakelike Skin Gives a Robot the Power to Crawl

How to Solve a Rubik's Cube in 5 Seconds—or Less