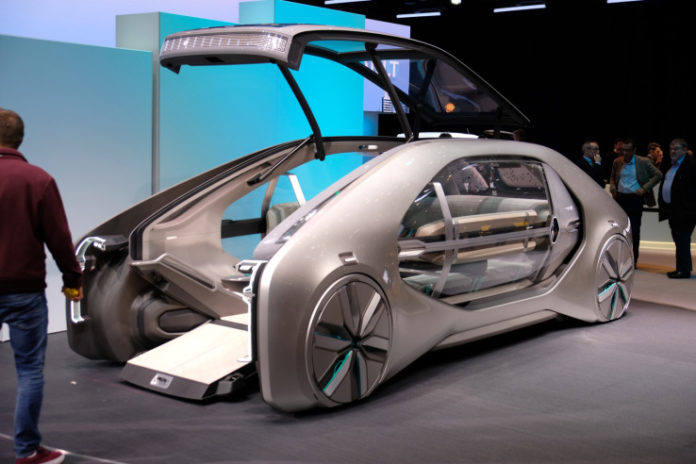 Renault’s EZ-GO is less concept car than a full transportation service concept design. The vehicle revealed at the Geneva Motor Show this week is a fully autonomous electric car that can’t travel fast, but that does fit as many as six passengers through a big, almost garage-like door that opens up to load people and goods easily.

The EZ-GO is designed for use in urban transportation scenarios, getting people around smoothly while managing the driving itself. The concept car is designed to be able to navigate city spaces more effectively with full four-wheel steering, and it’s intended to work on a shared service platform, through which you hail it to your location. You can also pick one up at designated stations, so it’s a bit like a cross between an Uber and a bus.

Passengers can actually stand up inside the cabin and walk out at full height thanks to the high-rise door, and there are windows all around giving you a pretty unencumbered view inside the car. It’s designed as a shared use asset, so the idea was to make it a community vehicle in all regards.

Basically, the EZ-GO is a vision of what a transportation system might look like in the future when urban residents are looking to fill in the gaps between public transit, taxis, Ubers and personal vehicles. The hope for the price point of rides in the car is to get it to above public transit but well below private hire vehicles.

It’s definitely a priority for cities to do more shared use vehicles, but getting there, and getting users comfortable with the idea, will still take some work. Renault still hopes to make this car a reality on roads by 2022, or some version that incorporates the basic principles of the concept they showed today.