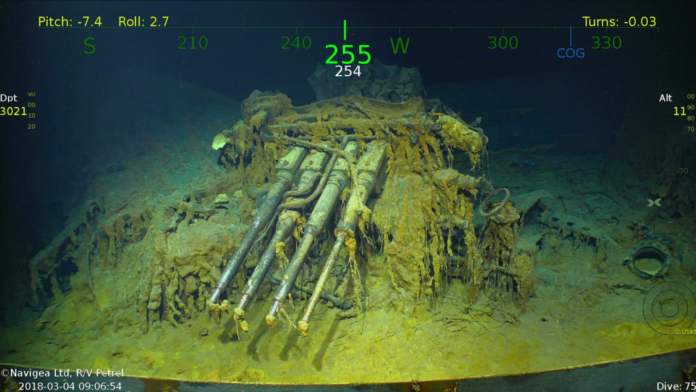 An antiaircraft gun from the wreckage of the USS Lexingon, a U.S. Navy carrier that was sunk during the Battle of Coral Sea in World War II. Credit: Navigea Ltd.

When the aircraft carrier USS Lexington sank beneath the surface of the Coral Sea, it represented a significant casualty of history’s first clash between carriers during World War II. 76 years later, an expedition led by Microsoft co-founder Paul Allen announced that it had rediscovered wreckage from the carrier known as “Lady Lex” lying on the seafloor about 500 miles off the eastern coast of Australia.

The loss of the USS Lexington took place during the Battle of Coral Sea: a battle that marked the first time rival aircraft carriers ever engaged one another in combat with ships from opposing surface fleets never coming within sight of one another. On one side, the Imperial Japanese Navy had launched a seaborne invasion force, including a light carrier and two fleet carriers, aimed at taking Port Moresby in New Guinea for the purpose of building an air base that could threaten Australia. On the other side, the U.S. Navy sent USS Lexington and another carrier, USS Yorktown, along with supporting warships from the Royal Australian Navy to intercept the Japanese force.

Both sides adopted a philosophy of “the best defense is a good offense” by seeking to find and knock out the rival aircraft carriers before the other side could retaliate. On May 7, the battle began in earnest with U.S. and Japanese scout planes mistakenly reporting that they had found the other side’s main carrier forces. Japanese air attacks crippled a U.S. oiler ship and sank its escort destroyer. On the other side, U.S. Navy planes drew first carrier blood during the battle by sinking the Japanese light carrier Shoho.

The pivotal events of the Battle of Coral Sea took place the next day. On May 8, U.S. Navy planes struck and damaged the Japanese fleet carrier Shokaku, but failed to locate the sister carrier Zuikaku that was hiding under the cover of low clouds. Japanese warplanes retaliated by bombing both the USS Lexington and Yorktown; they also struck the Lexington with torpedoes.

Still, the Lady Lex remained afloat and operational until additional explosions spread fires throughout the ship. After the carrier’s crew was forced to abandon ship, the U.S. Navy’s escort destroyers deliberately scuttled the Lexington and sent the ship to the bottom.

The USS Lexington was not the first carrier to ever go down in battle. On September 17, 1939, a German submarine torpedoed and sank the British carrier HMS Courageous not long after the start of World War II in Europe. Almost two and a half years later, the U.S. Navy’s first aircraft carrier called USS Langley was intentionally scuttled by its own escort destroyers after being left dead in the water from crippling attacks by dive bombers from the Imperial Japanese Navy. And the Japanese light carrier Shoho was sunk before the Lexington during the Battle of Coral Sea. 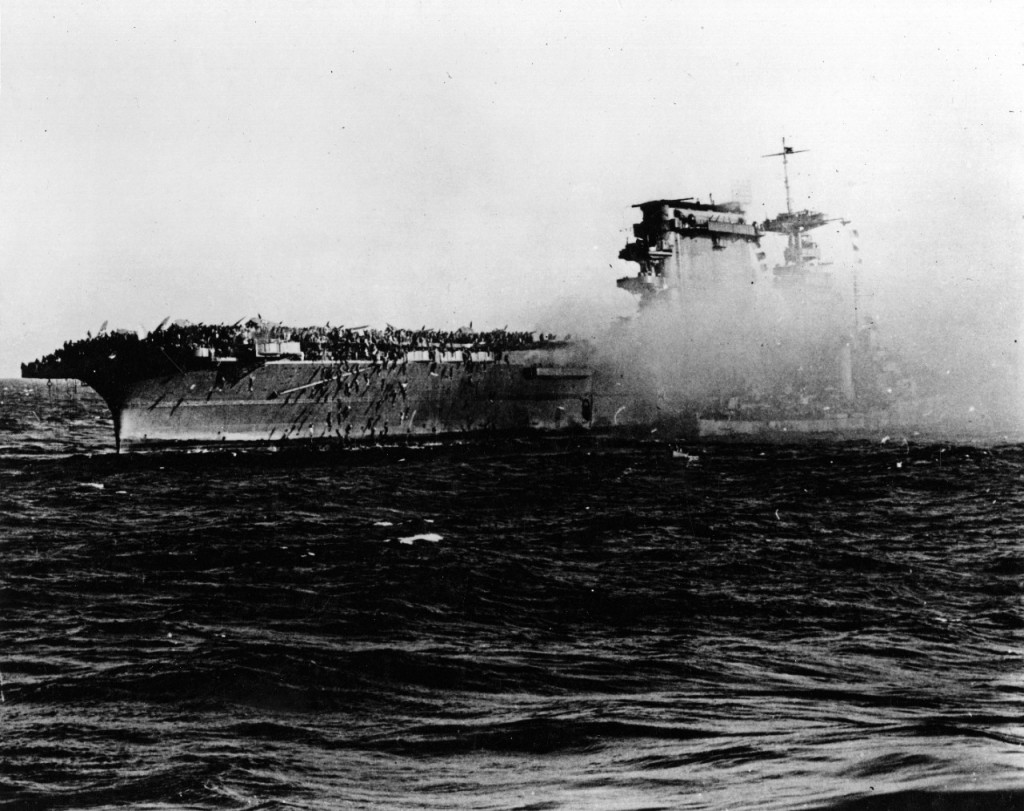 A destroyer alongside USS Lexington (CV-2) as the carrier is abandoned during the afternoon of 8 May 1942. Note crewmen sliding down lines on Lexington’s starboard quarter. Credit: U.S. Navy

The Battle of Coral Sea showed that both sides did not quite know how to best defend their precious aircraft carriers in that first major clash of carrier forces during the early stages of World War II. But during the Pacific campaign, the U.S. Navy would eventually learn how to keep more escort warships, such as cruisers and destroyers, clustered around their aircraft carriers to provide a better defensive curtain of antiaircraft fire against attacking dive bombers or torpedo bombers, said James Goldrick, a retired rear admiral of the Royal Australian Navy and a naval historian, during an expert panel discussion commemorating the Battle of Coral Sea at the University of New South Wales Canberra..

The loss of the USS Lexington and damage to the USS Yorktown initially gave the Imperial Japanese Navy a tactical victory in the Battle of Coral Sea. But the Japanese forces suffered a strategic defeat by being forced to abandon their planned invasion of Port Moresby that would have raised the threat to Australia.

In addition, the damage to the Japanese carrier Shokaku and the loss of many carrier planes and pilots meant that both Shokaku and its sister carrier Zuikaku sat out the upcoming Battle of Midway that took place from June 4-7, 1942. Meanwhile, the USS Yorktown was repaired in two days after briefly docking at Pearl Harbor, Hawaii and was able to join the carriers USS Enterprise and USS Hornet as they steamed to intercept the large Japanese force headed for the island of Midway. 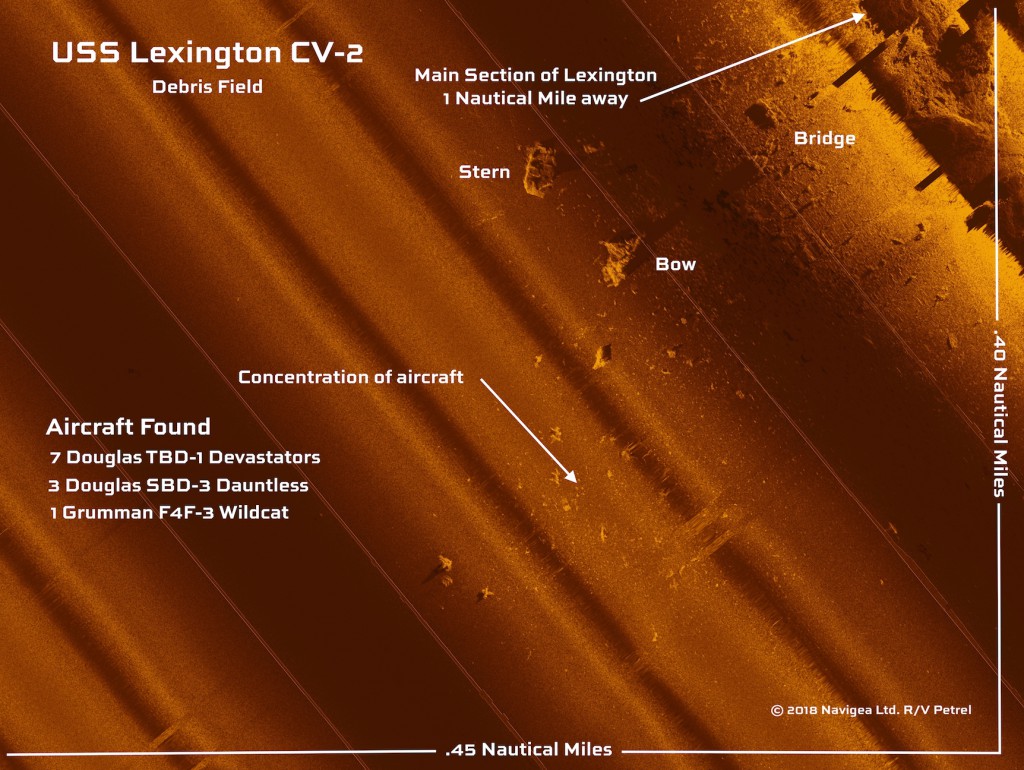 That next battle saw the Japanese lose four fleet carriers in exchange for the U.S. Navy’s loss of the USS Yorktown. The Imperial Japanese Navy’s loss of so many carriers, carrier planes and experienced pilots meant that Japanese forces were forced to take a defensive stance for the rest of the war.

The overwhelming industrial might of the United States combined with key technological advantages and superior strategic vision to grind down the Imperial Japanese forces in the Pacific, according to historian Cathal Nolan in his book “The Allure of Battle.”

From 1941 to 1945 the Kaigun converted or built just 15 carriers, mainly smaller seaplane types. Some were launched late in the war when there were no aircraft or trained pilots to equip them in their designed role. By 1945 Japan lost 334 warships and hundreds more auxiliaries. Over the course of the war, U.S. warship production exceeded that of all other navies combined. The U.S. Navy in 1945 put to sea over 1,000 warships, including 141 carriers (all types) and many tens of thousands of warplanes, supported by 232 submarines and swarms of auxiliaries: troopships, transports, oilers, hospital ships and others. The gap in the merchant marine was even greater.

World War II represented the only war where rival carrier forces have gone head to head. Since that time, the U.S. Navy has maintained the largest carrier force of any country and continues to update its carrier fleets with the new Ford-class aircraft carriers. Modern U.S. carriers represent nothing less than mobile, nuclear-powered air bases that each carry about 6,000 personnel and 70 aircraft. 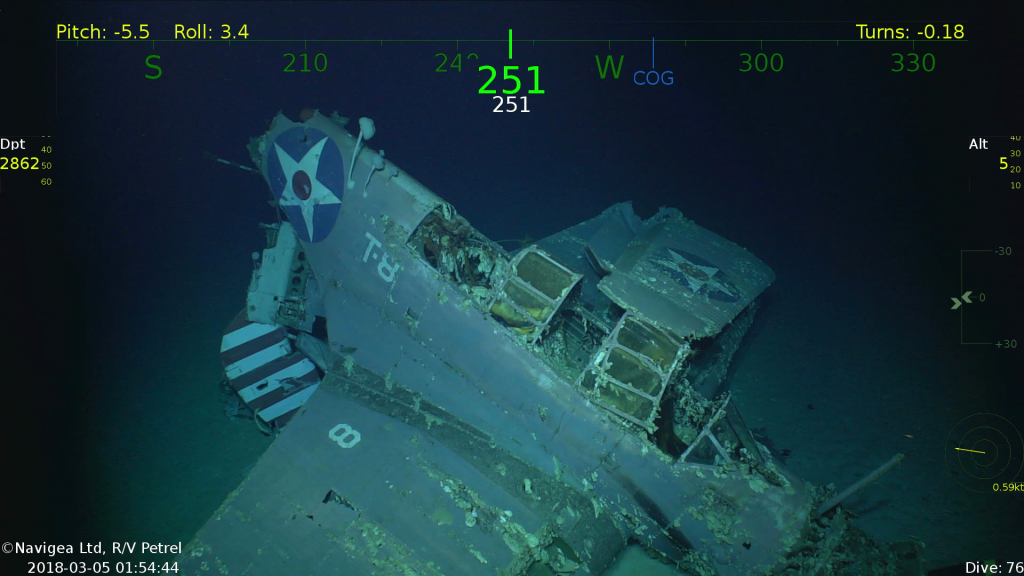 There is no doubt that carriers remain incredibly useful and powerful in terms of supporting various military operations and projecting national power. But it’s also likely that the age of carrier dominance cannot last. Even the best-protected carriers face a growing variety of threats from modern torpedoes, cruise missiles and ballistic missiles. A number of war games and simulations carried out by the U.S. Navy and its allies have resulted in “you sank my carrier” results.

Some military experts point out that “too big to sink” carriers represent a hugely expensive form of the U.S. Navy putting much of its offensive striking capability in one basket–each Ford class carrier and its accompanying aircraft cost approximately $20 billion–which could theoretically be lost in a single blow. Furthermore, the investment in carriers often weakens the offensive capabilities of supporting ships such as cruisers or destroyers that must focus on protecting carriers.

Those who doubt the wisdom of investing heavily in carriers have suggested spreading out future naval assets. They envision the future U.S. Navy having fewer carriers but a more diverse array of survivable or expendable assets such as submarines, drone ships and drone aircraft. But for now, the U.S. Navy seems set on building and maintaining a force of 12 carriers and their supporting fleets. It remains to be seen whether the ongoing commitment to a strong core of carriers proves wise in any future clash of major powers.